It’s now conventional for corporate media pundits and centrist politicians to acknowledge that their support for the US invasion of Iraq was misguided. Most excuse their pro-war record on the grounds that there was no available alternate narrative to the Bush administration’s claim that Saddam Hussein possessed weapons of mass destruction. How could they have known any better?

But as FAIR has long noted (Extra!, 3–4/03), this “we were all wrong” narrative doesn’t hold up. There were, in fact, a few corporate journalists who got it right when everyone else was getting it wrong.

Shock and Awe, a new film directed by Rob Reiner—of This Is Spinal Tap (1984) and A Few Good Men (1992) fame—tells the story of two of these journalists. At the center of Reiner’s proper noun–heavy docudrama are Jonathan Landay and Warren Strobel, two reporters for Knight Ridder, one of the largest newspaper publishers at the time. (It’s since been absorbed by McClatchy.)

The film shows Landay and Strobel—portrayed by a playful, good-hearted Woody Harrelson and an awkward yet sharp James Marsden, respectively—working tirelessly to counter the government’s lies about Iraq’s possession of WMDs and ties to Al Qaeda. Reiner and his writer Joey Hartstone tell the story of the lead-up to the invasion with clips of Bush and other “dickweeds” in his war cabinet deceiving the public, supported by an obedient media and the “think tank boys,” like “that giant butthole” Bill Kristol at the “Project for the New American Whatever-the-Fuck.” 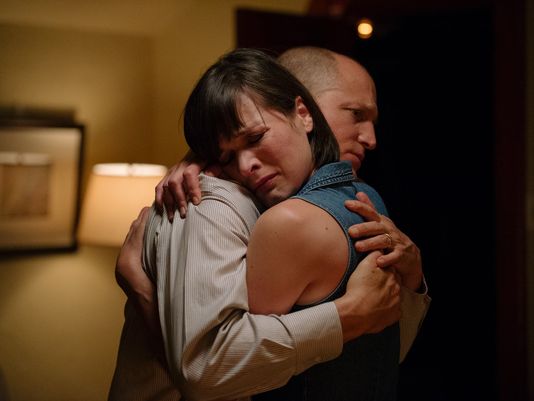 Woody Harrelson as Jonathan Landay is hugged by on-screen spouse Milla Jovovich in Shock and Awe.

Reiner and Hartstone maximize the political potential of every relationship and scene in the film. For example, when Landay’s wife (played by Milla Jovovich) cancels their subscription to the New York Times, she explains: “It’s propaganda, it’s packaging press releases from the White House, the State Department and the Pentagon. Sorry, that’s not a real newspaper.”

One scene later, set on the morning of September 8, 2002 (six months before the invasion), Strobel walks into the Knight Ridder office to drop a copy of the Times on Landay’s desk. Above the fold on A1 is Judith Miller and Michael Gordon’s infamous “aluminum tubes” story, which reported that Saddam Hussein had “embarked on a worldwide hunt for materials to make an atomic bomb,” based on interviews with unidentified “Bush administration officials.”

Miller “would quote a carnival fortune teller if he was willing to say Iraq had WMD,” quips  veteran journalist Joe Galloway, played by a confident, no-nonsense Tommy Lee Jones.

Later that day, as the Knight Ridder staff is watching Dick Cheney cite the Times story on NBC’s Meet the Press (9/8/02) to drum up support for the impending war, editor John Walcott—played by Reiner—reminds his staff whom they work for:

If every other news organization wants to be stenographers for the Bush administration, let them. We don’t write for people who send other people’s kids to war. We write for people whose kids get sent to war. So when the government says something, you only have one question to ask: Is is true?

The next 60 seconds juxtapose corporate media headlines with a frantic and relentless Knight Ridder team working to report the truth. 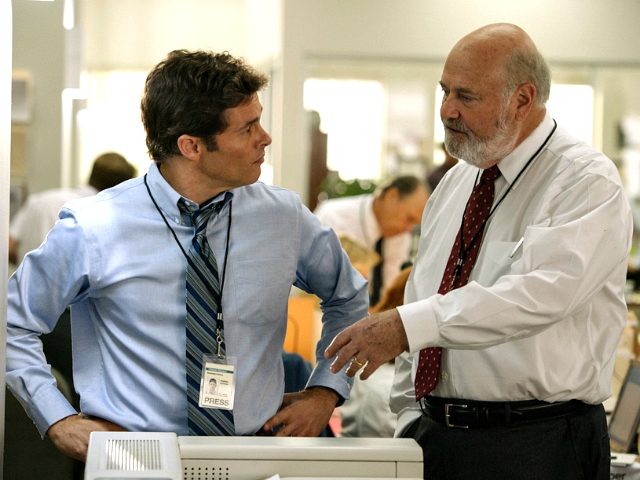 Scenes like this one show the film at its best, but Reiner’s public musings on current politics show that he hasn’t learned the simplest lesson of his own movie—that we should be skeptical of those at the highest levels of the US government. He has firmly bought intothe Russiagate hysteria and joined the FBI- and CIA-loving liberal #Resistance. His Twitter feed is filled with retweets of George W. Bush speechwriter David “Axis of Evil” Frum, Sen. John McCain and conservative cop-lover Joe Walsh.

We’ve just taken another big step towards Autocracy. An illegitimate President just threatened to remove security clearances from John Brennan, James Clapper & Michael Hayden for being patriots who are critical of a POTUS hell bent on destroying Democracy. Save the US. VOTE!!!

Did Reiner forget that Brennan, Hayden and Clapper all served in senior intelligence positions in the Bush administration prior to, during and after the invasion of Iraq? And that at the least the latter two were instrumental in selling the WMD claim, the one that his film goes to such great lengths to ridicule?

This liberal myopia is frustrating, and makes the film’s cringe-inducing scenes a bit more cringe-worthy. For example, in one scene, during a loquacious 55-second explanation of Middle East history and the implications of a potential war in Iraq, Jessica Biel’s character—who dates Strobel in the film—tells him, “After reading your stories, I know that Iran is the top sponsor of terror, not Iraq.” At a time when the president appears eager for war with Iran, when claims that Iran is a major sponsor of terrorism are dubious at best, it’s hard to understand why this line made the final cut.

Critics were not wowed by the film (Washington Post, 7/10/18; Rolling Stone, 7/13/18; Variety, 7/12/18), leading to a 34 percent Rotten Tomatoes percentage and a 45 score on Metacritic. But flaws aside, Shock and Awe delivers an effective valorization of aggressive, adversarial journalism that should inspire young reporters, and a powerful condemnation of one of the darkest moments in the history of journalism. For opponents of the Iraq War, it’s a feel-good movie that says, “We told you so.” And it doesn’t pull punches; viewers won’t forget the names of the congressmembers who voted to support the war, or that the New York Times (5/26/04) issued a mea culpa in disgrace.

For its educational potential—news junkies may find the film’s over-explaining annoying, but others will likely find it helpful—it’s unfortunate that Shock and Awe got a limited nationwide release on July 13 and was pushed out of theaters just over a week later. (It was made available on demand before its theatrical release on platforms like Amazon Prime Video, iTunes, YouTube Movies and Google Play.)

Though perhaps stylistically a bit overdone at points—if you want to watch Woody Harrelson spontaneously start playing acoustic guitar at a camp in Tora Bora, you won’t be disappointed—Reiner’s film reminds us why it’s so important to remember that there were traditional journalists, relying on low-level government sources, who got the story right: The next time the government is trying to sell the public on an unjust and illegal war, we need to pay attention to to the ones who know better.