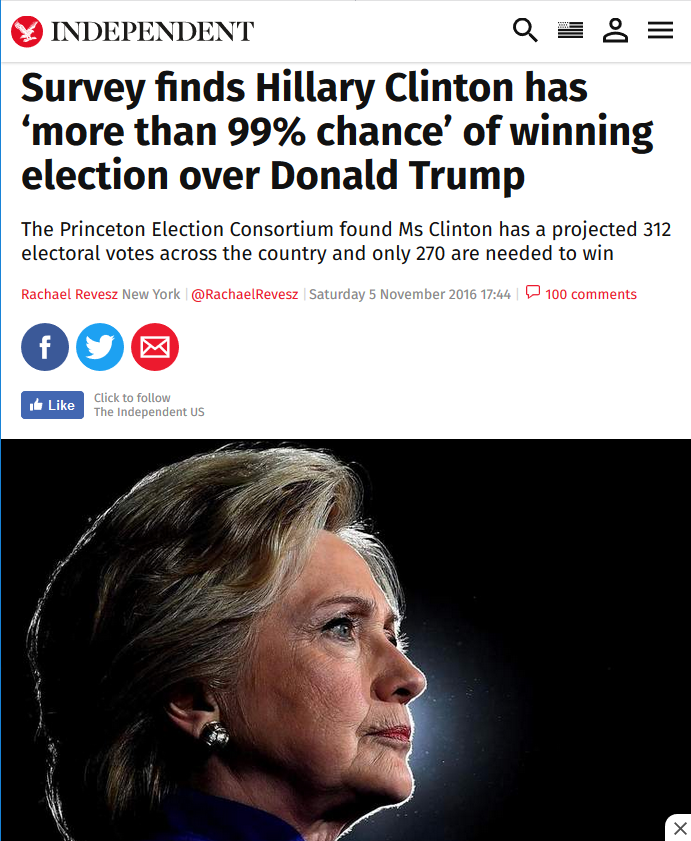 To the shock of many, Donald Trump won the 2016 presidential elections, becoming the 45th president of the United States. Not least shocked were corporate media, and the political establishment more generally; the Princeton Election Consortium confidently predicted an over 99 percent chance of a Clinton victory, while MSNBC’s Rachel Maddow (10/17/16) said it could be a “Goldwater-style landslide.”

Indeed, Hillary Clinton and her team actively attempted to secure a Trump primary victory, assured that he would be the easiest candidate to beat. The Podesta emails show that her team considered even before the primaries that associating Trump with Vladimir Putin and Russia would be a winning strategy and employed the tactic throughout 2016 and beyond.

With Clinton claiming, “Putin would rather have a puppet as president,” Russia was by far the most discussed topic during the presidential debates (FAIR.org, 10/13/16), easily eclipsing healthcare, terrorism, poverty and inequality. Media seized upon the theme, with Paul Krugman (New York Times, 7/22/16) asserting Trump would be a “Siberiancandidate,” while ex-CIA Director Michael Hayden (Washington Post, 5/16/16) claimed Trump would be Russia’s “useful fool.”

The day after the election, Jonathan Allen’s book Shattered detailed, Clinton’s team decided that the proliferation of Russian-sponsored “fake news” online was the primary reason for their loss.

Within weeks, the Washington Post (11/24/16) was publicizing the websitePropOrNot.com, which purports to help users differentiate sources as fake or genuine, as an invaluable tool in the battle against fake news (FAIR.org, 12/1/16, 12/8/16). The website soberly informs its readers that you see news sources critiquing the “mainstream media,” the EU, NATO, Obama, Clinton, Angela Merkel or other centrists are a telltale sign of Russian propaganda. It also claims that when news sources argue against foreign intervention and war with Russia, that’s evidence that you are reading Kremlin-penned fake news. 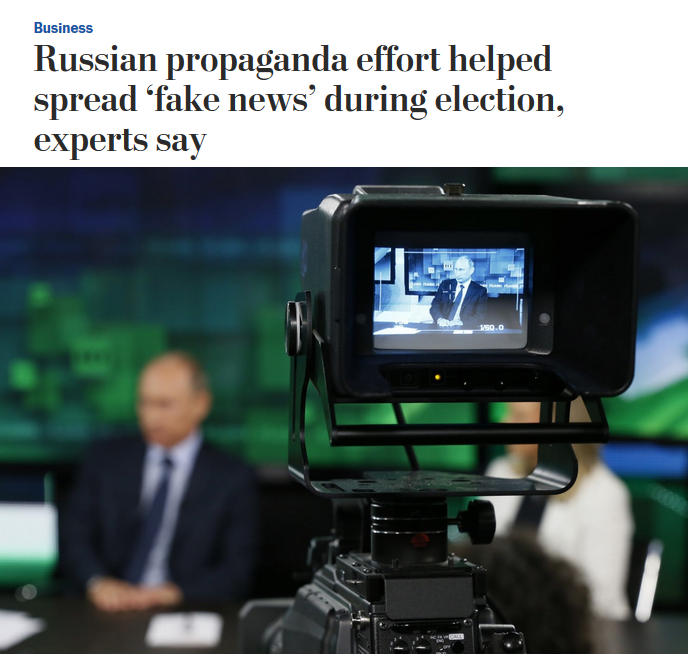 The Washington Post (11/24/16) was one of the first media outlets to blame the election results on Russian “fake news.”

PropOrNot claims it has identified over 200 popular websites that “routinely peddle…Russian propaganda.” Included in the list were Wikileaks, Trump-supporting right-wing websites like InfoWars and the Drudge Report, libertarian outlets like the Ron Paul Institute and Antiwar.com, and award-winning anti-Trump (but also Clinton-critical) left-wing sites like TruthDig and Naked Capitalism. Thus it was uniquely news sources that did not lie in the fairway between Clinton Democrats and moderate Republicans that were tarred as propaganda.

PropOrNot calls for an FBI investigation into the news sources listed. Even its creators see the resemblance to a new McCarthyism, as it appears as a frequently asked questionon their website. (They say it is not McCarthyism, because “we are not accusing anyone of lawbreaking, treason, or ‘being a member of the Communist Party.’”) However, this new McCarthyism does not stem from the conservative right like before, but from the establishment center.

That the list is so evidently flawed and its creators refuse to reveal their identities or funding did not stop the issue becoming one of the most discussed in mainstream circles. Media talk of fake news sparked organizations like Google, Facebook, Bing and YouTube to change their algorithms, ostensibly to combat it.

However, one major effect of the change has been to hammer progressive outlets that challenge the status quo. The Intercept reported a 19 percent reduction in Google search traffic, AlterNet 63 percent and Democracy Now! 36 percent. Reddit and Twitter deleted thousands of accounts, while in what came to be called the “AdPocalypse,” YouTubebegan demonetizing videos from independent creators like Majority Report and the Jimmy Dore Show on controversial political topics like environmental protests, war and mass shootings. (In contrast, corporate outlets like CNN did not have their content on those subjects demonetized.) Journalists that questioned aspects of the Russia narrative, like Glenn Greenwald and Aaron Maté, were accused of being agents of the Kremlin (Shadowproof, 7/9/18).

The effect has been to pull away the financial underpinnings of alternative media that question the corporate state and capitalism in general, and to reassert corporate control over communication, something that had been loosened during the election in particular. It also impels liberal journalists to prove their loyalty by employing sufficiently bellicose and anti-Russian rhetoric, lest they also be tarred as Kremlin agents. 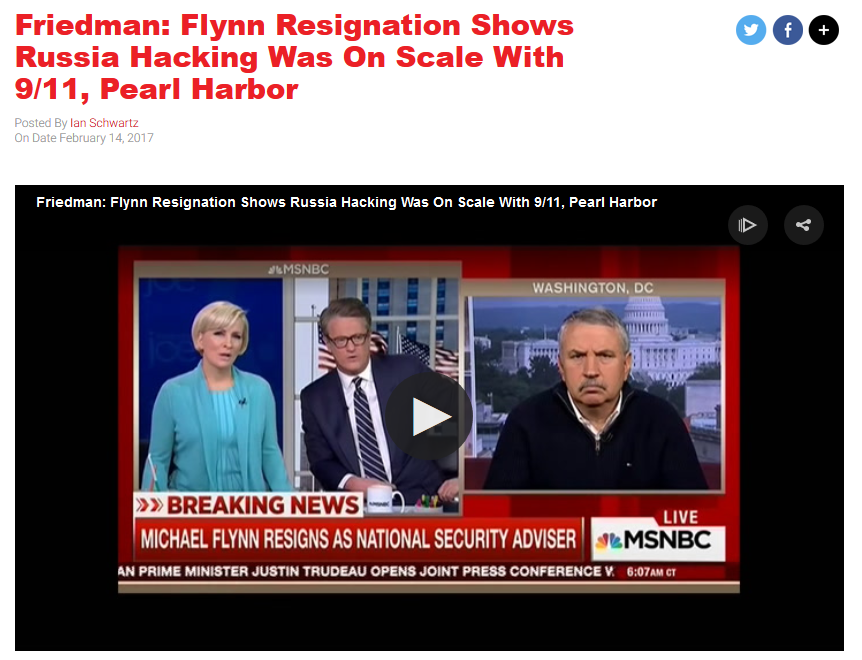 Thomas Friedman (Morning Joe, 2/14/18) pointedly compared email hacking to events that the US responded to with major wars.

When it was reported in February that 13 Russian trolls had been indicted by a US grand jury for sharing and promoting pro-Trump and anti-Clinton memes on Facebook, the response was a general uproar. Multiple senior political figures declared it an “act of war.” Clinton herself described Russian interference as a “cyber 9/11,” while Thomas Friedman said that it was a “Pearl Harbor–scale event.” Morgan Freeman’s viral video, produced by Rob Reiner’s Committee to Investigate Russia, summed up the outrage:  “We have been attacked,” the actor declared; “We are at war with Russia.” Liberals declared Trump’s refusal to react in a sufficiently aggressive manner further proof he was Putin’s puppet.

The McCarthyist wave swept over other politicians that challenged the liberal center. Green Party presidential candidate Jill Stein refused to endorse the Russia narrative, leading mainstream figures like Rachel Maddow to insinuate she was a Kremlin stooge as well. After news broke that Stein’s connection to Russia was being officially investigated, top Clinton staffer Zac Petkanas announced:

“Commentary” that succinctly summed up the political atmosphere.

In contrast, Bernie Sanders has consistently and explicitly endorsed the RussiaGate theory, claiming it is “clear to everyone (except Donald Trump) that Russia was deeply involved in the 2016 election and intends to be involved in 2018.” Despite his stance, Sanders has also been constantly presented as another Russian agent, with the Washington Post (11/12/17) asking its readers, “When Russia interferes with the 2020 election on behalf of Democratic nominee Bernie Sanders, how will liberals respond?” The message is clear: The progressive wave rising across America is and will be a consequence of Russia, not of the failures of the system, nor of the Democrats. 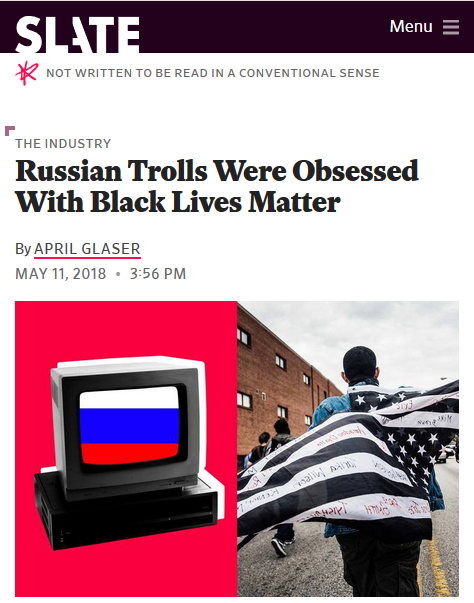 Outlets like Slate (5/11/18) warned of a sinister connection between Black Lives Matter and Russia.

It is not just politicians who have been smeared as Russian agents, witting or unwitting; virtually every major progressive movement challenging the system is increasingly dismissed in the same way. Multiple media outlets, including CNN (6/29/18), Slate(5/11/18), Vox (4/11/18) and the New York Times (2/16/18), have produced articles linking Black Lives Matter to the Kremlin, insinuating the outrage over racist police brutality is another Russian psyop. Others claimed Russia funded the riots in Ferguson and that Russian trolls promoted the Standing Rock environmental protests.

Meanwhile, Democratic insider Neera Tanden retweeted a description of Chelsea Manning as a “Russian stooge,” writing off her campaign for the Senate as “the Kremlin paying the extreme left to swing elections. Remember that.” Thus corporate media are promoting the idea that any challenge to the establishment is likely a Kremlin-funded astroturf effort.

The tactic has spread to Europe as well. After the poisoning of Russian double agent Sergei Skripal, the UK government immediately blamed Russia and imposed sanctions (without publicly presenting evidence). Jeremy Corbyn, the pacifist, leftist leader of the Labour Party, was uncharacteristically bellicose, asserting, “The Russian authorities must be held to account on the basis of the evidence and our response must be both decisive and proportionate.”

The British press was outraged—at Corbyn’s insufficient jingoism. The Sun‘s front page (3/15/18) attacked him as “Putin’s Puppet,” while the Daily Mail (3/15/18) went with “Corbyn the Kremlin Stooge.” As with Sanders, the fact that Corbyn endorsed the official narrative didn’t keep him from being attacked, showing that the conspiratorial mindset seeing Russia behind everything has little to do with evidence-based reality, and is increasingly a tool to demonize the establishment’s political enemies.

The Atlantic Council published a report claiming Greek political parties Syriza and Golden Dawn were not expressions of popular frustration and disillusionment, but “the Kremlin’s Trojan horses,” undermining democracy in its birthplace. Providing scant evidence, the report went on to link virtually every major European political party challenging the center, from right or left, to Putin. From Britian’s UKIP to Spain’s Podemos to Italy’s Five Star Movement, all are charged with being under one man’s control. It is this council that Facebook announced it was partnering with to help promote “trustworthy” news and weed out “untrustworthy” sources (FAIR.org, 5/21/18), as its CEO Mark Zuckerberg met with representatives from some of the largest corporate outlets, like the New York Times, CNNand News Corp, to help develop a system to control what content we see on the website. 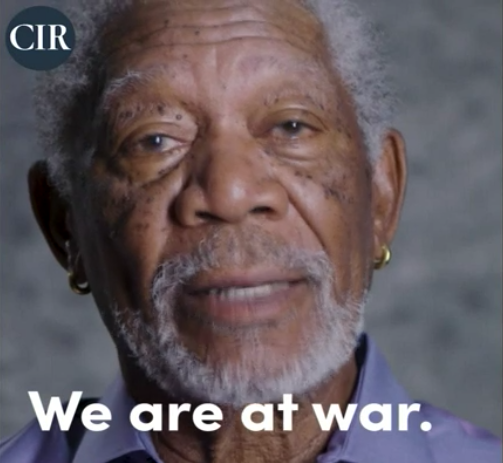 “We are at war,” Morgan Freeman assures us on behalf of the Committee to Investigate Russia.

The utility of this wave of suspicion is captured in Freeman’s aforementioned video. After asserting that “for 241 years, our democracy has been a shining example to the world of what we can all aspire to”—a tally that would count nearly a century of chattel slavery and almost another hundred years of de jure racial disenfranchisement—the actor explains that “Putin uses social media to spread propaganda and false information, he convinces people in democratic societies to distrust their media, their political process.”

The obvious implication is that the political process and media ought to be trusted, and would be trusted were it not for Putin’s propaganda. It was not the failures of capitalism and the deep inequalities it created that led to widespread popular resentment and movements on both left and right pressing for radical change across Europe and America, but Vladimir Putin himself. In other words, “America is already great.”

For the Democrats, Russiagate allows them to ignore calls for change and not scrutinize why they lost to the most unpopular presidential candidate in history. Since Russia hacked the election, there is no need for introspection, and certainly no need to accommodate the Sanders wing or to engage with progressive challenges from activists on the left, who are Putin’s puppets anyway. The party can continue on the same course, painting over the deep cracks in American society. Similarly, for centrists in Europe, under threat from both left and right, the Russia narrative allows them to sow distrust among the public for any movement challenging the dominant order.

For the state, Russiagate has encouraged liberals to forego their faculties and develop a state-worshiping, conspiratorial mindset in the face of a common, manufactured enemy. Liberal trust in institutions like the FBI has markedly increased since 2016, while liberals also now espouse a neocon foreign policy in Syria, Ukraine and other regions, with many supporting the vast increases in the US military budget and attacking Trump from the right.

For corporate media, too, the disciplining effect of the Russia narrative is highly useful, allowing them to reassert control over the means of communication under the guise of preventing a Russian “fake news” infiltration. News sources that challenge the establishment are censored, defunded or deranked, as corporate sources stoke mistrust of them. Meanwhile, it allows them to portray themselves as arbiters of truth. This strategy has had some success, with Democrats’ trust in media increasing since the election.

None of this is to say that Russia does not strive to influence other countries’ elections, a tactic that the United States has employed even more frequently (NPR, 12/22/18). Yet the extent to which the story has dominated the US media to the detriment of other issues is a remarkable testament to its utility for those in power.