25 August 2018 — Greanville Post
The Korean War has been called “America’s forgotten war”. The heavily weaponized US Army was fought to a draw by Soviet-equipped North Korean and Chinese armies. For the very first time in its storied legacy of military campaigns dating back to American Independence, the US Army did not prevail in war. In its next colonial war against communism in Asia the following decade, the US was soundly defeated by North Vietnam. However, these military setbacks are not the sole reason to forget the Korean War. There is a much darker denial at work in forgetting the specifics of history, and this unwillingness to honestly examine the Korean War is at the root of our ongoing conflict with North Korea. 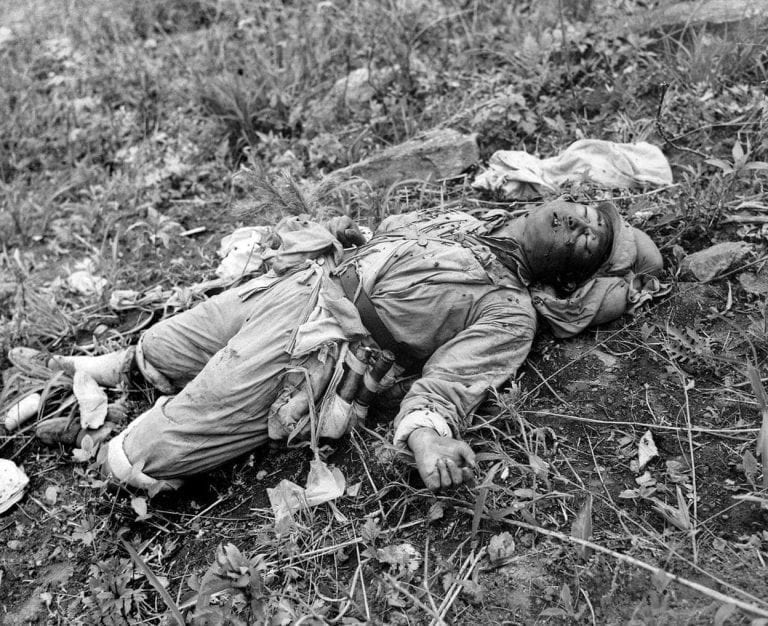 Korean War: Young dead Chinese soldier. US imperialism could not just let China heal her horrid wounds from WW2, she had to be forced to defend her sovereignty almost immediately at a cost of hundreds of thousands of lives.

The US Army’s clandestine deployment of biological weapons (BW) in North Korea and China during the Korean War is our ugly suppressed history. The allegation of American BW use was first made by North Korea in May of 1951. New allegations were made the following year by both North Korea and China that American war planes on night sorties dropped canisters containing insects and voles contaminated with bubonic plague, hemorrhagic fever and other highly contagious diseases on villages and fields in rural North Korea and China. 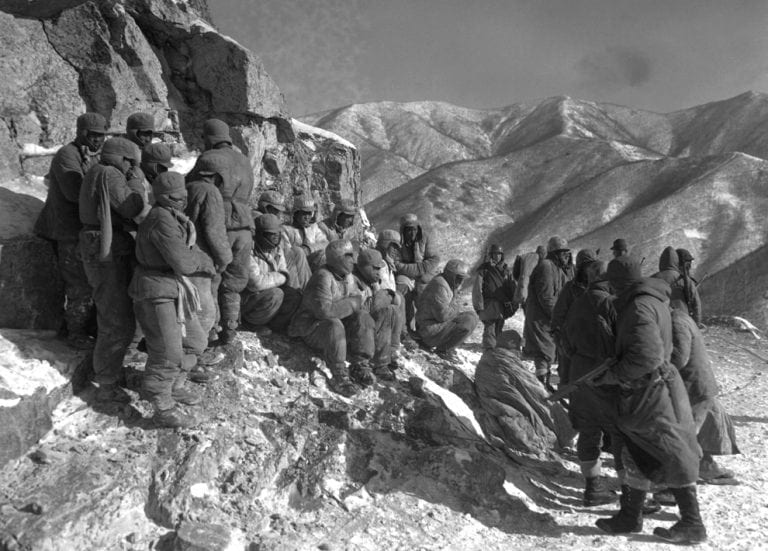 Chinese prisoners, Korean War. If it had not been for the Chinese participation, the Americans and their allies would have conquered the whole peninsula and threatened China directly. Their sacrifice turned the imperialist tide.

An International Scientific Commission (ISC) was convened in 1952 to travel to North Korea and China to investigate the BW allegations. The nine-member commission examined the collected evidence, visited sites, performed field tests, and took testimony from witnesses. The commission also took testimony from four captured POW American pilots. After compiling the record, the Commission determined that the testimony and evidence was overwhelming that the US Army had deployed biological weapons in war at several identified places at specific times. 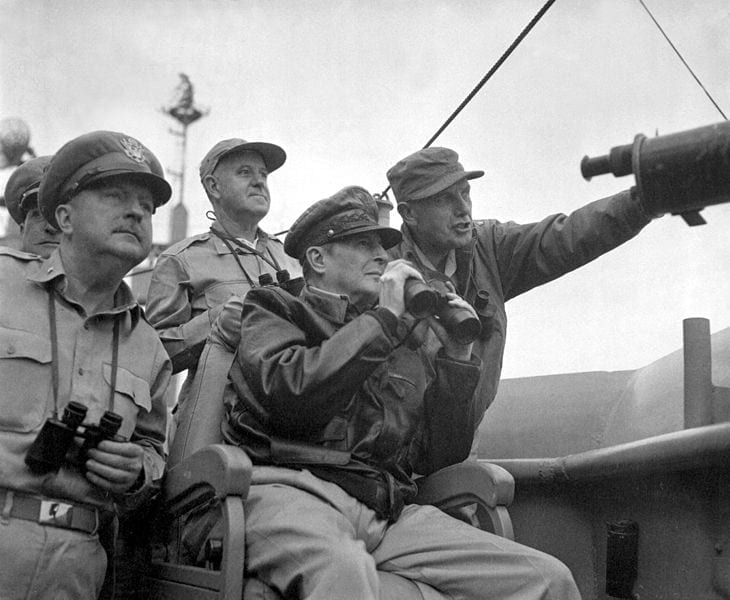 MacArthur with staff observing the shelling of Inchon. MacArthur, a racist imperialist to the marrow, wanted to drop nuclear bombs over Korea and China, and possibly the Soviet Union. He forced Truman to fire him for insubordination.

President Truman, Gen. MacArthur, the State Dept., and CIA, vigorously denied the charges that BW had been deployed in the scorched-earth war they were prosecuting in Korea. The Chinese and North Korean BW accusations were denounced as communist propaganda. The ISC Report was ridiculed; the commission members were labeled as communist dupes. The new Eisenhower presidency in 1953 brought the Dulles brothers to power, and US denial of BW use in Korea became the unspoken US policy locked in place. But armistice talks also began.

Simultaneously, there occurred the systematic shredding of the record of all BW related documents in the US Army Chemical Corps files— flight logs, shipping ladings, briefing reports, pilot logs— all the usual military paper trail that historians look for, have gone missing for the past 65 years! The Eisenhower administration also moved to punish public dissent with show trials for the disappointing war results in Korea, and to fan Cold War red-phobia. An American journalist, John W. Powell, was indicted on the federal charge of sedition for his pro-Chinese communist sympathies, his reportage of BW allegations, and his editorials on the Korean War in his news magazine China Monthly Review which he published in Shanghai, China.

The US Army’s clandestine deployment of biological weapons (BW) in North Korea and China during the Korean War is our ugly suppressed history. The allegation of American BW use was first made by North Korea in May of 1951. New allegations were made the following year by both North Korea and China that American war planes on night sorties dropped canisters containing insects and voles contaminated with bubonic plague, hemorrhagic fever and other highly contagious diseases on villages and fields in rural North Korea and China.

After much ado, the show trial began in January 1959 but ended abruptly in a mistrial being declared by the judge. The unofficial but very real “forgetting” of the Korean War really begins here with the collapse of the government’s case. Years later, Powell revisited the topic of BW and published two articles in 1983 outlining how the US Army had acquired biological weapons from Japan after WWII. The Japanese Imperial Army had run a clandestine bio-weapon research facility and prison camp innocuously name Unit 731 under the direction of Surgeon Gen. Shiro Ishii near Harbin, China in Japanese occupied Manchuria. This military laboratory experimented on live prisoners and murdered many thousand prisoners in medical experimentations with contagious disease. Another estimated 400,000 peasants in China, Manchuria and Siberia died from regionally unknown diseases caused by live diseased vectors dropped in canisters by Japanese aircraft. 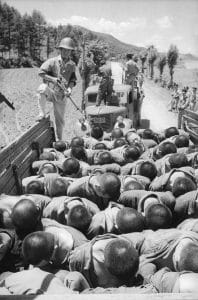 The similarity of delivery technology and pathogens between the Japanese BW deployment in Manchuria and the subsequent US deployment in Korea and China was noted by the ISC. After the Japanese surrender, Dr. Ishii and much of his staff successfully defected to the US occupying forces of Gen. MacArthur in Tokyo, bringing with them medical records and 8000 slide specimens of their research on disease pathology. This trove of disease experimentation on live subjects was quietly shipped to the US Army’s bioweapon research laboratory at Ft. Detrick, MD. Ishii and his scientists, guilty of some of the worse war crimes of the Pacific combat theater, were given immunity from war Tcrimes prosecution.

The evidence for American BW deployment during the Korean War is overwhelming. Yet, the denial machine of the security state continues today. Recently, a Woodrow Wilson Institute scholar, Milton Leitenberg, has reworked his theory that the entire Korean War BW affair was a giant communist hoax cooked up by Stalin, Mao Zedong, and Zhou Enlai to tar brush the US into ceasefire negotiations. Leitenberg’s conspiracy theory is a B-movie plot, not plausible given his questionable source material and the historical record. Nevertheless, this quasi-official spin demonstrates clearly the extension across time to which the state denial apparatus can reach. The ongoing denial of US war crimes committed during the Korean War has been an enormous stumbling block to the normalization of relations between the US and North Korea. We cannot end hostilities nor seriously negotiate with a nuclear-armed North Korea with lies and a phony history.

To read the full article with sources and footnotes see:

“Biological Warfare in the Korean War: Allegations and Cover-up”
by Thomas Powell
Socialism and Democracy, Vol.31 , No 1, March 2017

Thomas Powell is a sculptor and writer. His recent essays include, “Gun Lust: An Investigation into America’s Sordid Gun Addiction”, International Critical Thought, 6:1(2016), and “Living Space and Parking Space in China“, Bad Subjects #91.