The Integrity Initiative, a British pseudo-NGO tasked with running anti-Russian propaganda operation, was recently exposed. Further digging into it revealed a much wider operation. It seems to involve a mole British spies inserted into the Bernie Sanders campaign.

Three weeks ago internal budget proposals and member lists of the Integrity Initiative were posted anonymously on some website. We discussed those in detail under the headline: British Government Runs Secret Anti-Russian Smear Campaigns:

In 2015 the government of Britain launched a secret operation to insert anti-Russia propaganda into the western media stream.

We have already seen many consequences of this and similar programs which are designed to smear anyone who does not follow the anti-Russian government lines. The ‘Russian collusion’ smear campaign against Donald Trump based on the Steele dossier was also a largely British operation but seems to be part of a different project.

The ‘Integrity Initiative’ builds ‘cluster’ or contact groups of trusted journalists, military personal, academics and lobbyists within foreign countries. These people get alerts via social media to take action when the British center perceives a need.

The leaked papers of the Initiative have since been confirmed as genuine. More relevant details continued to emerge:

We have barely scratched the surface of what it, and it’s project Integrity Initiative are. Everywhere we look we find links to what could be described as the ‘deep state’, including, but not limited to (by a long way), the Institute of Modern Russia, 77th Brigade, the Information Warfare Initiative, Prop or Not and a host of other organisations which,

The Initiative, and its parent organization the Institute for Statecraft, are registered as a Scottish charity at a disused Scottish mill. The mill is owned by one of the institutes directors, Daniel Lafayeedney, who was a member of an SAS Regiment and later of the British Military Intelligence.

The BBC reported on the Initiative but, after talking to the government, completely changed its original story.

Several tweets by the Initiative’s Twitter account were directed against the Labour party and its head Jeremy Corbyn:

One tweet quotes a newspaper article calling Corbyn a “useful idiot”, that goes on to state: “His open visceral anti-Westernism helped the Kremlin cause, as surely as if he had been secretly peddling Westminster tittle-tattle for money.”

Labour members of the parliament have asked why the British government would pay for such Tweets. In its answer the government tried to claim that it had nothing to do with the tweets. But the propaganda use of the Initiative’s Twitter account was explicitly part of its budget proposal and the Labour MP Emily Thornberry continues to ask detailed questions:

In the Commons earlier, I asked Alan Duncan why taxpayers money had been used by the so-called ‘Integrity Initiative’ to disseminate political attacks from its Twitter site (1/2).
He insisted that the FCO funding did not support the Integrity Initiative’s Twitter operation, which raises some interesting questions. See my letter this evening demanding answers (2/2).

That the British government secretly funds a ‘non-government organization’ to propagandize against its opposition is a serious matter.

But the issue goes much deeper. Former British ambassador Craig Murray just published a bombshell that traces the Initiative to a much larger spying operation – British Security Service Infiltration, the Integrity Initiative and the Institute for Statecraft:

[..] I learnt how highly improbable left wing firebrand Simon Bracey-Lane just happened to be on holiday in the United States with available cash to fund himself, when he stumbled into the Bernie Sanders campaign.

In early 2016 Simon Bracey-Lane claimed to support Corbyn and worked as a ‘volunteer’ for the Bernie Sanders campaign where he became a “full fledged field organizer”:

Bracey-Lane has worked his way up the Sanders campaign but immigration rules mean he can’t get paid. Instead, he’s pledged to follow the campaign to the end, while using his savings to meet basic costs. 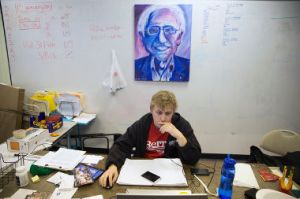 It is, to say the least, very interesting indeed that just a year later the left wing, “Corbyn and Sanders supporting” Bracey-Lane is hosting a very right wing event, “Cold War Then and Now”, for the shadowy neo-con Institute for Statecraft, at which an entirely unbalanced panel of British military, NATO and Ukrainian nationalists extolled the virtues of re-arming against Russia.

Nor would it seem likely that Bracey-Lane would be involved with the Integrity Initiative.
…
By sleuthing the company records of this “Scottish charity”, and a couple of phone calls, I discovered that the actual location of the Institute for Statecraft is the basement of 2 Temple Place, London. This is not just any basement – it is the basement of the former London mansion of William Waldorf Astor, an astonishing building. It is, in short, possibly the most expensive basement in London.

Which is interesting because the accounts of the Institute for Statecraft claim it has no permanent staff and show nothing for rent, utilities or office expenses. In fact, I understand the rent is paid by the Ministry of Defence.

Having been told where the Institute for Statecraft skulk, I tipped off journalist Kit Klarenberg of Sputnik Radio to go and physically check it out. Kit did so and was aggressively ejected by that well-known Corbyn and Sanders supporter, Simon Bracey-Lane. It does seem somewhat strange that our left wing hero is deeply embedded in an organisation that launches troll attacks on Jeremy Corbyn.

We do know that British intelligence services were heavily involved in the operation against the Trump campaign. A ‘former’ MI6 officer, Christopher Steele, wrote the fake dirty dossier about Trump’s alleged relations with Russia. Also involved was Sergej Skripal who was latter ‘novichocked’, probably after he threatened to blow the whistle about the whole operation. “Take care that Clinton gets elected” was likely the order the British government handed down. Its services failed to deliver.

Now we learn that other operations were underway with regards to Sanders and also against Jeremy Corbyn. Craig Murray seems to have learned more and promises to tell it in a future installment. There are several other people who are digging further into the issue and we can expect that this will develop into an even more serious scandal.

The anglo-american anti-Russian campaign, of which the Integrity Initiative is a part, seems to have a much wider target field than Russia. It is used to press for censorship of all unwelcome opinion that runs against the ‘deep state’ ordered narrative. It is used to undermine political opposition to the campaign domestically as well as abroad. And, as Murray says, we can expect it to become even more dirty as it proceeds.