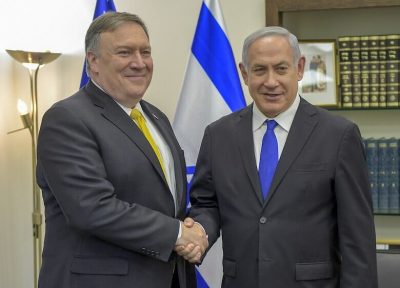 A few days ago I was seriously asking myself whether Donald Trump was insane after he spent a weekend tweeting/lambasting a dead John McCain. Today I have confirmation that he is not the only insane one on the national security team… We are doomed!

This report from the BBC regarding American Secretary of State Mike Pompeo‘s view of the possible divine origin of the 2016 election result as a necessary intervention to “save the Jews” is possibly the most frightening bit of commentary to come out of the Trump national security team. 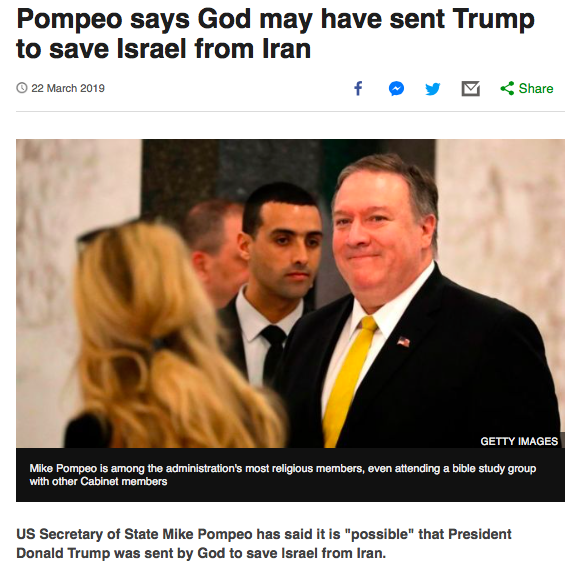 Pompeo by virtue of his office has great power to do good or ill and he has clearly chosen to make decisions based not on American interests but rather on his own personal interpretation of a religious text. Further, he is promoting American interference in an election in Israel which might have led to a rejection of the extreme right wing philosophy that guides its current government.

The move yesterday to recognize Israeli sovereignty over the Golan Heights was part and parcel of a plan to promote Prime Minister Benjamin Netanyahu as the candidate who would be best able to secure unlimited support from Washington.

More might be coming in the form of some recognition of Israeli sovereignty over the Palestinian West Bank prior to the April 9th election or even some military action against Iran.

Pompeo clearly believes that this is all part of some divine plan. Anyone who persists in thinking that nations should pursue policies that are rational and based on genuine interests should be appalled by the Pompeo comments and fearful of what the consequences might be.

Philip M. Giraldi, Ph.D., is Executive Director of the Council for the National Interest, a 501(c)3 tax deductible educational foundation that seeks a more interests-based U.S. foreign policy in the Middle East. Website is http://www.councilforthenationalinterest.org, address is P.O. Box 2157, Purcellville VA 20134 and its email is inform@cnionline.org. He is a frequent contributor to Global Research.

Featured image is from US State Department