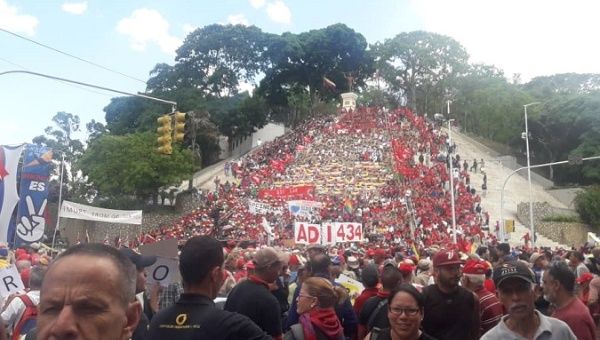 Students, workers, public officials, police and military personnel are marching together in rejection of the U.S. economic blockade against Venezuela.

Carrying national flags and wearing red sport hats, thousands began to gather early in the morning at squares and other public places. They would then take to the streets of Caracas, the Venezuelan capital, protest against the U.S. President.

On Friday, President Nicolas Maduro invited citizens to gather at the squares named after revolutionary Simon Bolivar and to sign a manifesto against the U.S. President’s unilateral actions.

Subsequently, the documents containing those signatures will be delivered to the United Nations as tangible proof of what Venezuelans think in the face of an economic blockade which has directly affected their everyday lives.

Across the country, students, workers, public officials, police and military pérsonnel are marching together in rejection of a set of arbitrary decisions whereby the U.S. prevents even non-U.S. companies from making any type of transactions with Venezuela.

In 2015, the Venezuelan people carried out a similar demonstration when then U.S. President Barack Obama signed an executive order which labelled their country as an “unusual and extraordinary” threat to security. On that occasion, 13,447,651 Venezuelans signed a  letter rejecting  the U.S. policies.

“The blockade totally contradicts the fundamental norms of international law, including the UN Charter, as well as international obligations of the United States, particularly those contracted with Venezuela. #NoMasTrump #NoMoreTrump.”

President Maduro thanked the citizen support and invited the Venezuelan people to continue participating in the defense of the peace and sovereignty of their country.

“I greet the World’s Great Day of Protest to reject the U.S. empire and the brutal blockade against Venezuela. I invite the entire Venezuelan people to sign in defense of our independence, peace and national sovereignty. Raise your voice with dignity! #NoMoreTrump,” he tweeted.

Through the social media networks, it was also possible to appreciate actions that social and political organizations from abroad offered to the Bolivarian revolution.

“In addition, several social leaders and political leaders have joined the world protest, one of whom was the Cuban President Miguel Diaz-Canel, who shared a supporting text to Maduro,” the Spanish outlet El Mundo reported.

“The dignity of the Venezuelan people and the strength of the Bolivarian Revolution do not break with criminal imperial sanctions. #HandsOffVenezuela,” Diaz-Canel, tweeted.