Since 2011 the Turkish President Recep Tayyip Erdogan used Syrian ‘rebels’ and Islamist Jihadis as proxy forces against the Syrian government. These forces are now mostly confined to Idlib governorate next to the Turkish border. The Syrian army recently made progress against the Jihadis. Turkey did not come to their help. That their resistance is futile began to dawn on them. Syria will recover the whole governorate and those who resist will be eliminated. The ‘rebels’ fear that their punishment is coming and they now want to flee to Turkey. Unfortunately Turkey does not want them. 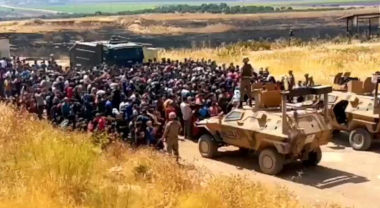 Today about a thousand ‘rebels’ tried to cross through the Al-Bab border station into Turkey. Videos show a long line of cars of fleeing people. At the front several hundred men managed to enter Turkish ground. They were pushed back by Turkish army forces with water cannon trucks, tear gas and finally with gunfire. At least two ‘rebels’ were killed. 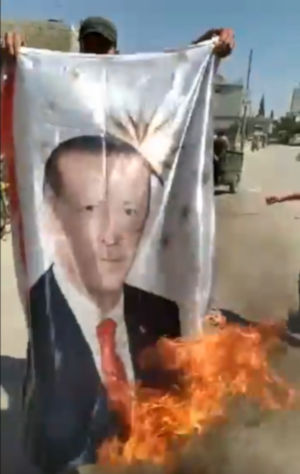 Since the begin of the war on Syria the ‘rebels’ hoped that the Turkish army would come to their help or at least protect them. Last weeks meeting between Erdogan and President Putin of Russia finally convinced them that this will never be the case. Since Russia entered the war on the Syrian side Putin managed to turn Erdogan from an enemy into a tamed dog. Erdogan was in Moscow to check out the airplanes Russia will sell him and Putin bought him ice cream. 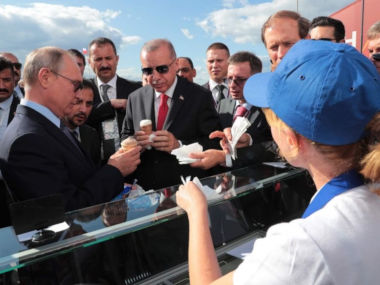 After much resistance Erdogan has finally given up on Idleb. While Russia had agreed to a ceasefire in Idleb, Erdogan failed to deliver his part of the deal. The Jihadis in Idleb, supplied by Erdogan, continued to attack Russian forces and Syrian civilians. The Syrian and Russian forces responded with an intense and well targeted bombing campaign and by taking back more and more land. Eleven days ago Turkey made a last attempt to stop the Syrian army by sending a convoy of troops to prevent the recapture of Khan Shaykhun. The convoy was bombed and Khan Shaykhun fell.

That was the moment Erdogan gave up. Five of his generals, two responsible for the Turkish observation posts in Idleb, asked for their retirement. Erdogan traveled to Moscow and made some deal. Syria will regain Idleb and Erdogan got an ice cream.

The pressure of people who want leave Idleb after their years of fighting against the Syrian state will not end. Turkeys economy is in a downturn. The people have become wary of refugees. There is nothing to win for Erdogan by letting more people in.

The Syrian army campaign continues. The next bigger target will be Maarrat al-Numan with a pre-war population of 80,000 people. Most of them have no reason to fear the Syrian government. But many will want to flee the fighting. Each assault will push more people to leave.

There will be more incidents at the border and within Turkey. The ‘rebels’ and Jihadis will want to take revenge on the Turkish traitors who pushed them to fight the Syrian government only to leave them behind when they failed to win. The soldiers in the Turkish observation posts in Idleb are now hostages of the Jihadis. They may need the help of Russian bombers to fight their way out or will have to sit still until the Syrian army liberates the region around them.