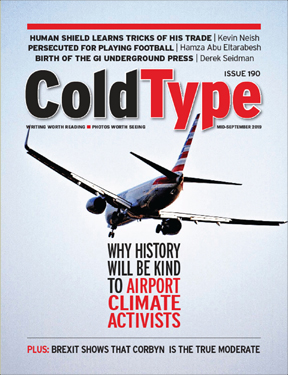 Top story in this issue is George Monbiot’s vigorous defence of climate activists at London’s Heathrow Airport – disrupted travellers might resent them, but history will be on their side, he says. Other big stories include Jonathan Cook’s assertion that the UK’s disastrous Brexit shows that Jeremy Corbyn is the only moderate in the clash between unyielding factions; Linda McQuaig calls for a tax on the super-rich; and  Hamza Abu Eltarabesh reveals the persecution of Palestinian footballers by Israel. We’ve also got Tom Engelhardt on alien invasions, Kevin Neish on the perils of being a human shield, Will Kaufman on Woody Guthrie, Oscar Grenfell on the media and Julian Assange, and Conn Hallinan on climate change.  Plus we have an excerpt from a book on the Vietnam War’s GI underground press, and features on Robert Mugabe, bad smells, fear of doctors, American privilege . . . and more

All 190 issues of ColdType are available at
www.issuu.com/coldtype