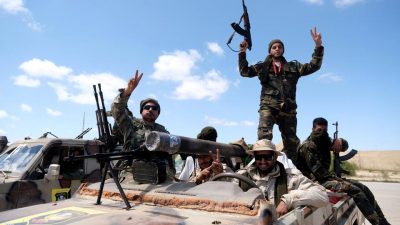 Alarms are sounding in Europe as Turkey, Russia and Arab states could potentially agree on shared influence in Libya, and therefore the entirety of the eastern Mediterranean, according to some experts. This comes as European states have no influence over the war in Libya despite it occurring on its southern doorstep and Turkey, Russia and Arab states continue to gain influence.

The direct intervention of Turkey in Libya, which has sent its own intelligence officers, military advisers and thousands of Syrian jihadists to support the Muslim Brotherhood Government of National Accords (GNA), based in Tripoli and led by the ethnic Turk Fayez al-Sarraj, has limited further gains by the Libyan National Army (LNA).

The mobilization of thousands of Turkish and Syrian jihadists and the massive shipment of weapons to Tripoli has slowed down the offensive of the LNA, led by Field Marshal Khalifa Belqasim Haftar. Haftar was proclaimed on April 27 as the only leader of the country, in which most of the international community found to be a provocative move as they believe it limited the likelihood of a political settlement to the conflict.

Confident of his past military superiority and assured in the determination that the United Arab Emirates, Saudi Arabia and Egypt have to counter Turkey’s efforts to create hegemony in the Eastern Mediterranean, Haftar continues to ignore calls for a political solution to the war. Sarraj also ignores such calls confident in the backing he has from Turkey.

Russia also condemned Haftar’s offensive and called for negotiations on peace. However, the U.S. claims that Russian fighter jets arrived in Libya to protect the withdrawal of volunteers from the Russian Wagner group in a decision agreed upon with Ankara, something that Moscow denies. Both Europe and the U.S. fear that Russia may obtain the use of a naval base in eastern Libya, that the LNA securely controls, in the future.

Despite these potentialities, it is unlikely the war between GNA-backed jihadists and the LNA will come to a conclusion anytime soon, unless there is a drastic change caused by external forces. Turkey in the midst of an economic crisis is unwilling to use the full force of its military in Libya and is rather acting as a conduit between the GNA and Qatari-funded but Turkish-trained Syrian jihadists. Egypt is contemplating using its military in Libya to “fight against Libyan extremists and terrorists supported by Turkey.” This too could be a game changer since Egypt has the means, logistics and capabilities to successfully intervene in Libya in favour of the LNA.

France has also not hidden away with its support for Haftar, finding him to be a leader that would advance French interests in the Mediterranean that is in direct conflict with Turkey. The GNA has also signed a memorandum with the Muslim Brotherhood government to cut through Greece’s maritime space for the exploitation of gas in that area of the Mediterranean, forcing Greece to get embroiled in the Libyan mess. Meanwhile, Italy has backed the GNA while Germany is trying to act as referee, showing once again there is no common European position.

The European ‘Irini’ (meaning peace in Greek) operation is committed to prevent maritime-bound arms delivery to Libya, i.e. Turkish arms to Libya. This is a maritime surveillance operation to enforce the United Nations-imposed arms embargo on Libya, but in reality, it has not prevented Turkey’s deliveries to the GNA while Egypt continues to supply the LNA over the land border.

The situation shows that the European Union is unable to establish itself as a main actor in a conflict that brings together strategic political and economic interests a few nautical miles from its southern coast. With the U.S. realistically absent, Turkey backing the GNA and Russia and the Arab + Greece alliance backing the LNA, these are the main protagonists.

In Paris, and seeing the failure of his diplomacy parallel to the EU, the Foreign Minister, Jean-Yves Le Drian, warns about the “Syrianization of Libya,” while spokesman of Turkish President Recep Tayyip Erdoğan’s gloats: “France and other European countries supporting Haftar are on the wrong side of history.” Seen in this light, the balancing role Russia can play in Libya to contain Ankara could even be positive for Europeans.

However, the main reason that shared influence will not be agreed upon is because the GNA-Turkish deal to steal Greece’s maritime space relies on a supposed share maritime space between Libya and Turkey. And therein lays the problem – it is the LNA, who has rejected the memorandum, that controls the eastern Libyan coast that supposedly shares a maritime border with Turkey. So long as the LNA controls eastern Libya, Turkey will always strive for a GNA victory to legitimize the memorandum. Once again, the European Union remains divided on Libya, despite the Muslim Brotherhood government aiming to carve out the maritime space of a member state.

This article was originally published on InfoBrics.

Featured image is from InfoBrics