During the early 1950s War on Korea the U.S. used biological weapons against North Korea and China. Bombs designed to spread leaflets were filled with plague infested rats and dropped on Korean towns. Various infecting insects were released. Leaflets were contaminated with small pox and then distributed. Several local epidemics were caused by these attacks.

The program was a continuation of one which a special unit of the Imperial Japanese Army had developed during the second world war. Unit 731 and its leaders were not indicted for the war crimes they had committed during the war but integrated into the U.S. biological warfare program.

The Soviet Union and China made political noise about the use of biological weapons but the U.S. stoically denied that it ever used such weapons. U.S. pilots, shot down and imprisoned by the North Korean forces, admitted that they had dropped such bombs. The U.S. then falsely alleged that the pilots had been tortured and must have lied. This led to demands to train all pilots to resist torture measures:

Since World War II the U.S. Airforce and Navy had established training courses in Survival, Evasion, Resistance and Escape (SERE) for pilots that might be captured by enemies. During these courses interrogations were staged to provide realistic training. After the Korea War anti-torture training was added. Torture of “prisoners” was “simulated” with the trainees. Decades later, during the war of terror and on Iraq, the CIA hired two psychologists from the SERE training staff as “behavioral science consultants” to teach its agents how to use torture on prisoners. The absolutely inhuman and dangerous methods those SERE “experts” devised proliferated to the U.S. military which, together with the CIA, used them on alleged enemy combatants in Abu Ghraib, Guantanamo and other places.

Now back to the War on Korea. The Chinese and Soviets sponsored the International Scientific Commission (ISC) headed by one of the foremost British scientists of his time, Sir Joseph Needham, to investigate the use of biological weapons during the war. Three years ago we wrote about its report:

For a long time the commission’s report and its appendices with the witness statements were suppressed and not available online. Jefferey Kay, a psychologist and author living in northern California, dug them up and recently published them (recommended) on the web for the first time. You can read them here:

Sir Joseph Needham was blacklisted by the U.S. during the McCarthy anti-communist campaign.

Needham’s investigations have since been confirmed by other scholars investigating the general case.

Now Jeffrey Kaye has dug up additional documents which confirm the other reports of U.S. germ attacks on North Korea and China. Interestingly these documents are from the CIA. 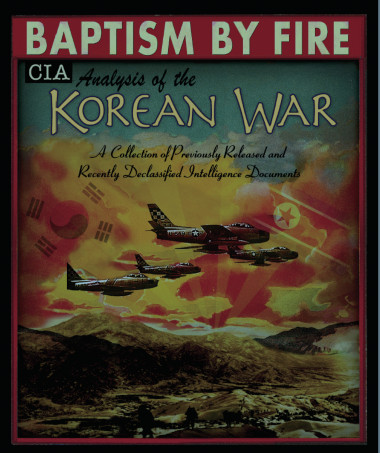 Cover art for the CIA pamphlet release in 2013
bigger

The published documents are 1,300 items which were declassified and released 60 years after the 1953 ceasefire stopped the war. They included analysis of U.S. communication intercepts (COMINT) between various North Korean and Chinese military and political entities.

Jeffrey Kaye has read through these documents and is discussing them here in the context of what is known from other sources. He summarizes:

The COMINT cables and other intelligence reports released by the CIA in 2013 under the heading “Baptism by Fire” provide a real contribution to our understanding of the North Korean and Chinese experience of the war, as well as U.S. communications intelligence efforts. In particular, they provide a rare window into North Korean and Chinese military reactions and responses to what they said was a biological warfare attack, whose air component began in January 1952 and continued almost up to the armistice in July 1953.

Importantly, a selection of COMINT cables and other previously secret and “confidential” intelligence reports from the Korean War now are available to serve as historical evidence.

The information from the COMINT data corroborates charges that North Korea and China were under bacteriological attack in 1952, and disconfirms some of the evidence offered suggesting the attacks were really a “hoax” or an exaggerated response to presumed, but more innocent attack.

The war crimes the U.S. committed during the War on Korea had serious historic consequences some of which continue today. There is not only a direct line from those biological attacks on North Korea and China to the CIA’s torture methods at Abu Ghraib and elsewhere. The germ warfare is also a major reason why North Korea continues the development of its nuclear weapons and of the means to deliver them.

Dangerous U.S. biological weapon research is still happening today. Two years ago eminent German and French scientists publicly warned about the dangers of a new project by the Defense Advanced Research Projects Agency (DARPA). The agency wants to use insects to spread viruses that can modify the genes of plants. As we stated at that time:

The mechanism of spreading infectious genetically modified viruses to genetically modify and ‘heal’ plants in the fields is itself full of problems and dangers. To use insects for distributing such viruses borders on insane.

If one has access to the targeted crop fields and if one has a genetically modified virus to influence the plants why would one use insects to distribute it? Why not use the well known targeted process of spraying the affected fields, just like it is widely done today? Only when one does not have access to the fields, when these are situated in a foreign country the U.S. has no access to, does it make sense to use insects for such purposes.

The idea that the real (and illegal) purpose of such U.S. research is biological warfare is not far fetched at all.

It is important to raise public awareness of past and current biological weapon programs. Jeffrey Kaye is doing a yeoman’s work to enable that. Please help to distribute his past and present work.

One thought on “CIA Intercepts Suggest U.S. Lied About Biological Weapon Use During Its War On Korea”