André, my good friend and comrade is no more.

We worked on several investigative projects together. André’s professional rigor, sharpness of understanding, vision and ability to connecting the dots is exemplary.

We shared some unforgettable moments, when we followed a refugee trail from Bodrum, Turkey, to the Greek Island of Kos in the Aegean Sea – onwards to Athens.

In the night from Monday to Tuesday 22 September, André traveled by chauffeur-driven car with his wife from Samsun on the Black Sea in Turkey to Istanbul. When they arrived in the early morning hours at the hotel and his wife wanted to wake him up, he didn’t react. He had passed away.

Turkish police said André’s death was “suspicious”. His body was immediately brought to a hospital for forensic analysis.

André traveled relentlessly from one battle field to another, from one conflict zone to a war zone. He exposed innumerable atrocities committed around the world, mostly by western powers. He never wavered from revealing the truth. From Afghanistan to Syria, Iraq, Iran, Sudan to Argentina, Chile, Peru to Hong Kong, to Xinjiang, the Uygur Autonomous Region of the People’s Republic of China – André was there. He reported on environmental crimes in Borneo, or originally called Kalimantan, Indonesia, where corruption is destroying vital rainforests – the lungs of Mother Earth – for the benefit of western corporations, killing wildlife and annihilating the livelihoods of indigenous people.

André stood always up for justice, in defense of the poor, for the persecuted, the oppressed – for those that by and large are considered non-people by the elitist Global North; the destitute, the refugees, political prisoners, those that disappear and wither away in the shadows. As an investigative journalist and geopolitical analyst, he fought Supremacist Might for Human Rights. André was a true Internationalist. He will be deeply missed.

May his soul rest in peace and his spirit live on.

Peter Koenig is an economist and geopolitical analyst. 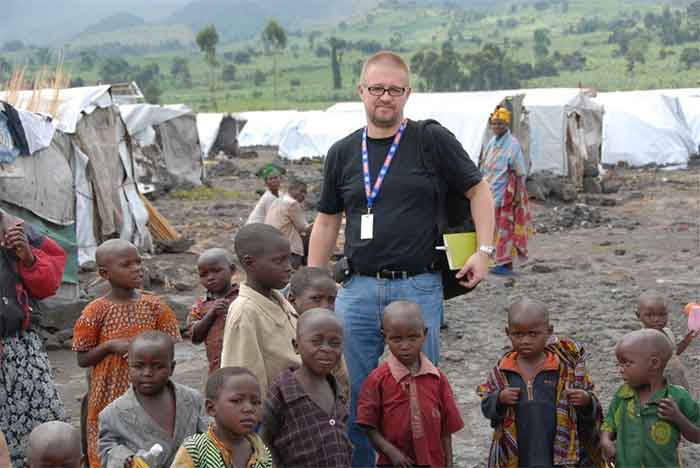 Andre, your last moments in Karaköy, İstanbul are yet unknown. But, we know you with your actions and stand – anti-imperialist.

Andre Vltchek, (1962 – September 22, 2020), a fighter, was always on the move. He was moving from South Africa to Indonesia, East Timor to Bosnia, Congo to Mexico, Sri Lanka to Peru, Syria to Hong Kong, and many such areas of conflict arising out of plunder, imperialist intervention, rights denied to people, exploiters robbing people and nature. His moves were a spirit of struggle. Always Andre was at the front line. It was a stubborn stand against imperialism. That’s Andre’s identity.

Andre’s works – books and documentaries – spoke for peoples in countries, voiced against imperialism. Andre never missed imperialism from his eyesight. It’s a basic difference between Andre and a group of today’s “fighters for rights” spitting sectarian slogans for “struggle”. He was never like this group in imperialism’s pocket.

Andre never followed sectarian line; never stood for archaic ideas; and never befriended “crusaders” for retrogressive system. He, on the opposite, fiercely stood against reactionary ideas, practices and camps. He was striving to expose these.

Andre never gave up his worldview – a scientific analysis, a dialectical approach, a class line, which is now discarded by a group claiming to be “progressive”, who carry blue prints for imperialist intervention in their pockets while posing “progressive”.

Andre’s travel through this path of anti-imperialist struggle, against exploiters, and for the exploited was long that began from soul searching after his close encounter with the system of exploitation. His experience bared the system’s sordid soul before him. His interview with Binu Mathew, editor, Countercurrents (December 4, 2018), How I Became A Revolutionary And Internationalist: Andre Vltchek, tells his travel-path through the world of exploiters, a journey to know the system of lies, deception, hypocrisy and exploitation, a journey to the frontier for people’s struggle for emancipation.

Andre proudly stood for the Great October Revolution as he reiterated the revolution’s ideas and defended its actions – smashing the shackle of exploitation. His The Great October Socialist Revolution: Impact on the World and the Birth of Internationalism iterates proletariat’s historic journey for humanity’s emancipation.

Leningrad, the city with the history of proletariat’s epoch-making victory over exploiters, was Andres’, the journalist-political analyst-filmmaker’s, dream city, the city he was born in but of which almost nothing he could remember, as he had to leave the city as a boy aged three years. But, he always loved the city on the Neva, dreamt about the city as he told the Countercurrents editor: “Leningrad [….] always stayed inside me.”

His Terlena – Breaking of The Nation, One Flew Over Dadaab and Rwanda Gambit were eye-openers of the 1965 massacre of the working people, working people’s activists and leaders in Indonesia, the tragedy of the Somali refugees and the plunder of the DR Congo respectively – the places the exploiting classes soaked their hands with the commoners’ blood, and the chessboards of imperialism.

On the 1965-genocide in Indonesia, Andre told Countercurrents editor:

“The West overthrew Sukarno in the bloodiest coup of the 20th century. Between 1-3 million people were butchered, and rivers were clogged with corpses: members of the Communist Party [of Indonesia] (PKI), intellectuals, teachers, unionists.

“I call it ‘intellectual Hiroshima’. The West suggested that all theatres and film studios get shut down, that Chinese and Russian languages are banned, together with the Communist ideology. Almost all writers and painters were imprisoned in Buru concentration camp.

“Mass rapes took place all over the archipelago.”

“became extremely religious, oppressive and dogmatic. In the same time, this nation of well over 300 million (official statistics lie, putting the number of people at somewhere around 250 million) counts with no great writers, filmmakers, thinkers or scientists.

“Everybody there thinks the same – the way ‘they suppose to think’: they love capitalism, hate Communists, they see destruction of their own natural resources as ‘progress’, they all listen to the same outdated Western pop music, watching the lowest Hollywood productions as well as tacky local horror films, and have the lowest number of books read per capita.”

Andre was relentless in exposing imperialism. His Exposing Lies of the Empire, Fighting Against Western Imperialism, On Western Terrorism: From Hiroshima to Drone Warfare (with Noam Chomsky) and Western Terror: From Potosi to Baghdad are parts of his anti-imperialist struggle. He told Binu Mathew: The world “can be saved, but again, only if imperialism and neo-colonialism are destroyed.” [The interview referred above.] Andre has no confusion about imperialism, no theoretical collusion with imperialism.

One cannot negotiate with fascism and imperialism.

Oppressed, plundered countries, have to unite and fight.

And I love stories. Without good stories, there is no life. Along the journey, the road, there are millions of stories. They define and illustrate our human kind. Based on these stories, there is great revolutionary struggle, igniting our planet once again.

Imperialists want us to forget about the stories. They want us to live on pre-fabricated junk stories of Hollywood and Disney. It is our duty to tell the real stories, because they are much more beautiful than computer-generated ones, and they are true.

That’s why I create, write, and film. No stories, no revolution!

And more I hear and see and create, the happier I get.

It is my obligation to fight for better, socialist world. I never see it as a sacrifice. (ibid.; this and the following quotations are not in order of the original.)

[W]hile fighting against the Western imperialism: I never saw my choice as some sacrifice. It is great privilege, an honor, to fight colonialist West. I confront it, particularly its brainwashing narrative, on all continents, and in all corners of the world. It is great fight and I love fighting it.

I sometimes fall from exhaustion, or injury. But I never regret embarking on this path. It is my obligation to fight for better, socialist world. I never see it as a sacrifice.

And, you love Cuba, Andre. You said:

I, a Soviet internationalist educated on Cuban thoughts, exchanging ideas! Publicly and frankly.

I am a fighter. I am an internationalist, a Communist. We are winning. Slowly, very slowly, but winning.

The journey is tough, it is dangerous. But I don’t want any other journey, or any other fate.

My life is not perfect, but I would never trade. I do my best. And I love it the way it is.

This is Andre, a fighter, an internationalist, a standard-bearer of proletarian revolution.

You are correct as you said:

I will never retire – that would be my end.

This is Andre, my friend.

And, Andre, friend, you’ve not retired. The journey you have embarked on is marching forward. So, there’s no retirement, neither of you nor of any in the ranks of the struggling people. So, no au revoir, Andre.

One thought on “André Vltchek Remembered”