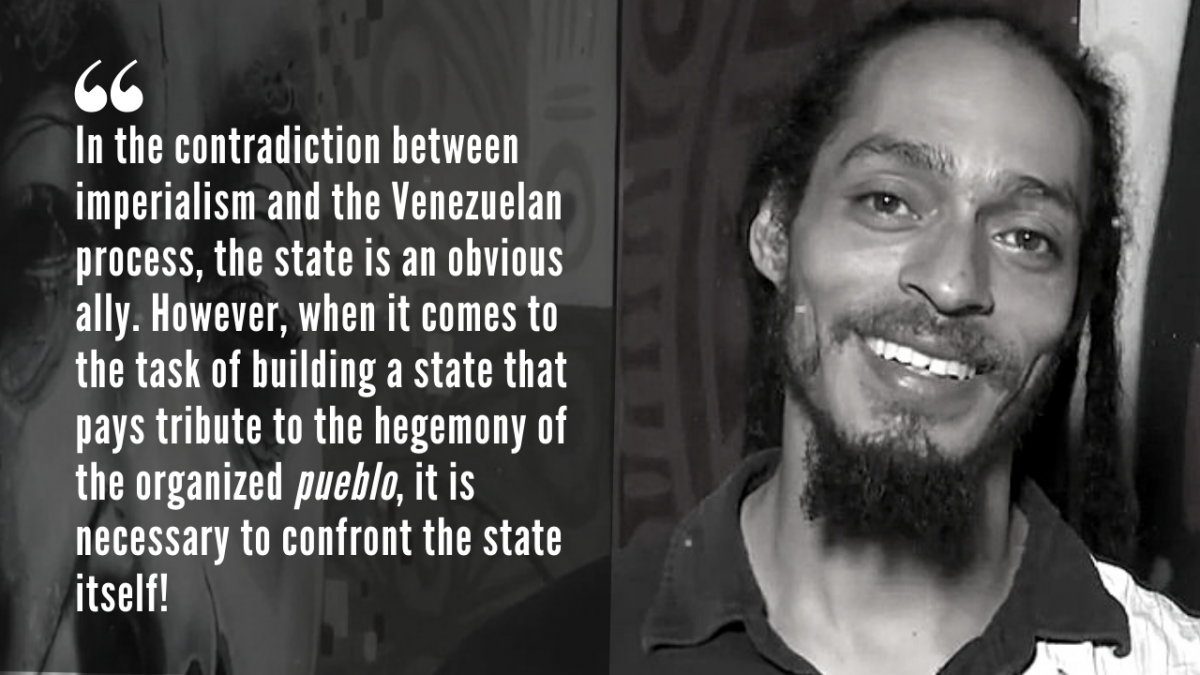 José Solórzano’s lean, two-meter-tall frame makes him a surprising person to be known as “Yoda.” He is one of the key militants of the Chavista collective La Minka, which is part of the continent-wide multi-disciplinary organization Comunidades Al Mando/Proyecto Nuestra América [Communities in Charge/Latin America Initiative]. Focusing on cultural and productive projects, Comunidades Al Mando runs bakeries, occupied farmsteads, radio stations, and youth recreation programs. In this interview we talk to Yoda in Ksa La Minka, the collective’s headquarters in Caracas, where they run silk screening workshops and a community kitchen that feeds some 100 people every day. Our conversation, which touches on their local work and their grassroots conception of politics, takes place over a meal from the collective kitchen.

La Minka and Comunidades al Mando are autonomist organizations committed to changing the world not from above but from below and with the people. Could you tell us about what this work amounts to?

I’m part of a revolutionary work collective called La Minka which is, in turn, part of Comunidades al Mando/Proyecto Nuestra América, a platform that follows that old African proverb: small people in small places, doing small things that transform the world together.

We are militants working in the communities and within the working class. In the community, in the neighborhood, that is where the new political subject is emerging that gives vigor and coherence to the revolution. We are talking about the communal subject.

Fostering the emergence of the communal subject is our main task, and with this goal in mind, we are accumulating forces. We accumulate forces with the communities, in the barrio and in the campo. This is necessary because the communal subject must displace the reformist and bureaucratic currents within the state, the corrupt sectors, and the social-democratic forces that prevail within the government. In other words, we work so that the communities, the class, the popular forces, can displace those currents and radicalize the revolution. Our long term objective is establishing the hegemony of the organized community.

Comunidades al Mando has five fields where it works to accumulate forces. What are they?

There is also the communication field: we have been building community radio stations with an editorial line that brings struggles and organizational initiatives to the forefront so that people can understand (and thus commit to) popular power. We also have a newspaper project underway, but our goal is that it will be a formative tool rather than an informative one.

The communication field also promotes stenciling and mural painting, storytelling, music and theater. Additionally, following Carlos Lanz’s [long time revolutionary whose recent work focused on proxy war] proposal, we are building “communication rooms.” These spaces are conceived not only to distribute information but to gather data and produce knowledge. We must learn to read and analyze misinformation produced both by the mainstream and state media… to combat false information we must impose the hegemony of the news from below, making those who struggle everyday visible.

To give you an example, when Alfredo and Aryenis [two Chavista PDVSA workers falsely accused of treason and corruption] were condemned on television, we responded with the truth and called for their immediate release. Also, if there are problems with public services in the community – as there often are – we must make it known.

The third field of accumulation is the neighborhood. As I mentioned before, the community is the integral space of the working class. Neither the [historically wealthy and powerful families] Zuloagas nor the Mendozas nor the Rockefellers live there. The neighborhood (or the community, as you might want to call it) is fraught with contradictions – the nun and the prostitute, the cop and and the thief, they all live here – but the subject that keeps the revolution alive is here and not in the institutions (although we may have allies within the state apparatus). That is why we are calling for communal self-government and organizational autonomy, and why our core work is inside communal initiatives, such as communal councils, land and water committees, and the [subsidized food] CLAP. We are part of local power, with the potential to form communes. Building local power is the first step to consolidate popular power.

Finally, in regard to our work in the neighborhoods, I should highlight our work with youth. The Proyecto Infantil Travesuras [Children’s Mischief Project] is an initiative aimed at connecting with the barrio youth, expanding our presence and control in the neighborhood, and bringing new militants to our organization. The project brings 15 to 25-year-old youths into cultural and recreational spaces.

The fourth axis of accumulation is the popular defense system. We cannot expect people to organize against capital, to occupy the land, to take control of leisure spaces, to occupy bakeries engaged in speculation, without having self-defense tools. There, our popular militias for the integral territorial defense come into play.

Those are the five fields for accumulating forces and struggling. We are small collectives, small organizations, each with its capacities and tools, working together to generate radical change.

Going back to La Minka, tell us about its work in the neighborhood and the construction of the Miraflores Commune.

Ours is an economy of resistance, which is characteristic of self-managed organizations, and a premise of communal self-government. The Minka collective works out of Alta Gracia and La Pastora in Caracas. For us, the name of the organization expresses our strategy. “Minka,” in Quechua, means collective work done for the community. That is our practice and our strategy. From La Minka, we have been building the five fields of accumulation using our tools and our capacities.

We run a bakery that we occupied over three years ago. We took it from a capitalist who was speculating on bread. We run stencil and silk screening workshops out of Ksa La Minka and we have a small farm in a piece of land that we occupied about a year ago. We also have a community kitchen that feeds some 100 people every day, and we run Radio La Minka 96.1 FM.

Of course, we participate and play a key role in the local CLAP and in the area’s community councils.

Right now, we are focused on the commune. We are blocks away from the presidential palace and our work with the community has allowed us to become the engine behind the Miraflores Commune. Formalizing its existence as a commune is a recent occurrence, but our work is communal by nature.

Chávez, in his famous “Strike at the Helm” speech [2012], talked about the urgent need to organize communities and scolded his cabinet because there was no Miraflores Commune. Now, from La Minka, we are responding to Chávez’s call. It is a historical imperative.

The commune is the main political and legal tool that Chávez left us. It’s about people building power from below, but also about generating independence from the powers that be. While the construction of the commune comes with some links with the government (which, in turn, give us institutional recognition), we don’t conceive the commune as an appendix of the state or an organization at the service of the government. We aspire that the Miraflores Commune will become a combative, militant organization generating class consciousness.

Venezuela is under siege, and the impact of the US sanctions is devastating. Right now, however, internal contradictions are also becoming more visible. How do you interpret this moment?

We have a central contradiction: the empire-nation contradiction. We cannot understand our reality if we don’t understand imperialism. Our state is a barrier against imperial hegemony and its destructive force.

However, the state is a thousand-headed monster and we have, indeed, contradictions with it. Many currents within [the state] are far from being revolutionary, and this became visible after Chávez’s death. His passing brought about a process of fragmentation. Within the Bolivarian Process, there are very strong neoliberal currents that promote privatization; bureaucratic currents that do not believe in popular power but in the hegemony of the existing state; rentier and corrupt currents; but there are also currents that promote popular power and self-government.

However, the most important thing is that in the Bolivarian Process the majority is not in institutions but on the street, working for a better communal society and looking for solutions for the people, projecting a better world.

Imperialism has done everything it can to wipe out the Bolivarian Revolution, but it hasn’t succeeded. That is a good sign. However, what we have doesn’t satisfy us. We are accumulating forces within to advance and in honor of Chávez’s project.

How do Comunidades al Mando and La Minka deal with their contradictions with the government, all the while cooperating in many areas?

With Chávez we managed to put the bourgeois state at the service of society as a whole, but the structures remained more or less intact. It was no easy task.

Now, we find ourselves with structures and laws that favor capital. We still have the same old state created by capital to favor capital, and the [capitalist] logic is being fostered from within. On the other hand, the state is hindering the devastating logic of imperialism, with its commitment to destroy the Venezuelan nation. In this contradiction between imperialism and the Venezuelan process, the state is obviously an ally.

However, when it comes to the heroic and miraculous revolutionary task of building a state that pays tribute to the hegemony of the organized pueblo… well, then it is necessary to confront the state itself!

In this world of contradictions, we have some allies within the government, but we lost our main ally and “mole” on the inside: Hugo Chávez.

The contradictions are here and they are latent. Those currents that see capitalism as “normal,” individual accumulation as positive, and private property as the only possibility – those are not our friends. Those currents are in the state, just as there are currents there that support popular power. That is why we say that there is a complex dialectic within the state.

However, despite the many visible and latent contradictions, popular power can express itself openly here. We have freedoms that people don’t have in Chile, Brazil, or the United States. And so, in spite of the contradictions, problems, and broken hearts, we continue to accumulate forces with a view to changing the conditions of the game and pushing for social transformation.

As the working people of Venezuela struggle, we are also building a new communal society, and La Minka is one such example: we have a political presence in the territory, we produce, we create, and we build new relations through our work… and we do so in a context of flexible contradictions.