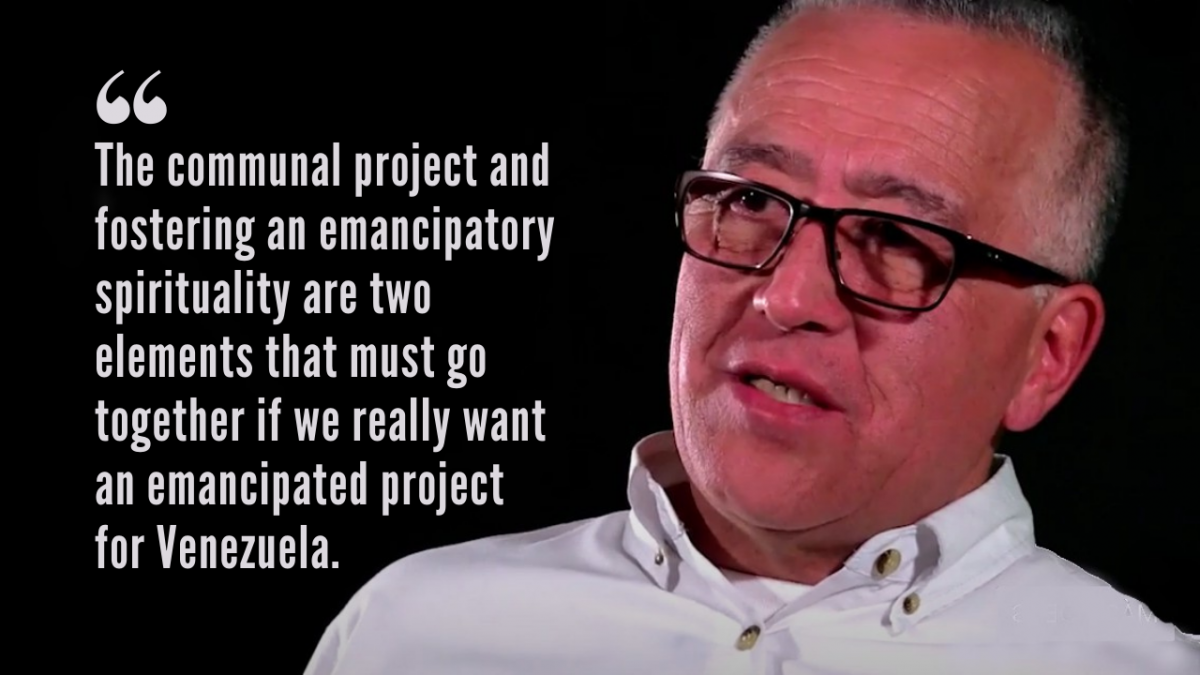 Numa Molina is a Jesuit priest, theologian and journalist who committed himself fully to the Bolivarian Process when most of the Catholic church’s hierarchy took sides with the fascistoid opposition. In this interview, Molina talks about dialogue and reconciliation, the ethical crisis that some sectors of Chavismo are experiencing, and the non-material dimensions of emancipation.

You have talked about the need for dialogue and reconciliation in Venezuela. How and in what way can there be reconciliation between two antagonistic projects?

It is true that there are two opposite views [in Venezuela], and I agree that they are irreconcilable. However, when it comes to a process of reconciliation, we must look for what unites us, rather than that which brings us apart. For example, in a family, there can be different opinions and ways of interpreting the world, but when it comes to the interests of the family group as a whole, the differences should be put aside and, instead, its members should turn to what effectively unites them, which in this case would be love for the family.

It is possible to have a dialogue among those that differ insofar as identity is not lost. When it comes to dialogue, the “identity” is the love for the country. If you and I love this country, then we can engage around that common identity, which unites us. We can dialogue and reconcile.

The importance of dialogue becomes visible now that a nationalist opposition – a sector that cares for the country – is emerging in Venezuela. They [the government and the democratic opposition] were able to sit down and talk because they found common ground.

On the other hand, dialogue with the far-right opposition is not viable, as it is impossible to reconcile and find a minimum common ground. This is due to two reasons. First, they would not accept being penalized for the crimes against humanity they have committed. The second reason, related to the first, is that a person or group that does not accept having committed a crime cannot be the subject of reconciliation. As such, it is impossible to speak of forgiveness. Reconciliation begins with the aggressor’s conscious acceptance that he sinned, that he did wrong.

Within Chavismo, the crisis we are living has generated indifference and apathy, in addition to an ethical crisis. I understand that you think that this crisis developed over a period of time. How would you propose to reactivate a revolutionary spirituality and praxis that would not be merely charitable but active and militant as Chávez himself?

The situation that you are describing is one of the objectives of the non-conventional war waged against Venezuela. Its goal is to generate discouragement, distrust, and alienation among the militancy. The community that comes with belonging to a project was lost to some along the way.

Utopias can die, and losing the ability to dream can lead to hating one’s country. This is the philosophy behind the war that the United States is waging against us. That is why we see so many Venezuelans who have given up on their country.

Fortunately, they did not fully achieve this objective, but the sectors of the militancy without preparation for a critical response to this perverse message were affected and ended up giving up on everything.

Additionally, the living contradictions in some who presented themselves as leaders of the revolutionary process and are now fugitives from justice for embezzlement has also hurt morale.

Reactivating a revolutionary spirituality today is all about building a coherent and committed practice. It is not enough to say that “one sided with the poor” to be credible. I say this both in a political sense and at the ecclesiastical, religious level. We must live with the poor, as the poor, and from the perspective of the poor.

That, moreover, is the authentically Christian attitude. The popular classes are not going to be convinced by social media or from an office in a ministry. They will be convinced if we are among them, and when their problems cannot be solved – because we are facing a terrible crisis generated by the imperialist aggressions, by the blockade and the unilateral coercive measures – we must face the problems together.

From the spiritual point of view, there is no need for leaders that have faith. Instead, we need credible ones. It is easy to believe; the difficult thing is to be credible.

During the independence wars two hundred years ago, Venezuelans rebelled against all authorities including the Church. During the Federal War [1859-63], the people again turned the table on the old hierarchies. Today most Venezuelans are believers but – with the exception of some evangelicals – are quite independent from religious institutions. Do you think the history of Venezuela affects society’s relationship with the Church and religion in general?

I believe that the root is not so much history per se, but rather the history of the institutional Church model and the ecclesiastical authorities, which have sided with the powerful throughout history.

The exceptions have been few and far between if we take into account that, for example, in the War of Independence, only a handful of priests sided with [Simón] Bolívar. One of them was Bishop Lazo de la Vega in Mérida. By the way, the correspondence between Bolívar and Lazo de la Vega is extraordinary. Very profound and beautiful letters!

The people have perceived the incoherence I spoke about earlier in this ecclesiastical attitude. Indeed, Christian incoherence is far more unforgivable [than in the realm of politics]. After all, Jesus’ project was clearly in favor of the poor. Jesus proposed a project for liberating the multitudes that were without a shepherd. Today the sheep remain without a shepherd.

The ecclesiastical model has been scandalous. The Church has an important role to play in the history of humanity if it is committed to realizing the project of Jesus among the humble. If that is not at the core of things, then everything is lost. The Church cannot be an NGO at the service of the powerful classes, of big capital, of the rich of this world. In fact, that goes against the project of Jesus.

Liberation Theology advocates the emancipation of the individual through the construction of a community of equals. That resonates with Chávez’s project of the commune, which proposes collective emancipation through democratization of the economic, political, and social spheres in territorially-defined communities. What can you tell us about this interrelationship?

When Chávez devised the plan for the new socialist cities, he thought of them as liberated territories. That is actually what he said. In other words, they are spaces where one can live with sovereignty and freedom, while building a new model of society based on reciprocity and sharing. The objective of these liberated spaces is to dignify people who historically were excluded.

During the four decades of the Fourth Republic [1958-99], the people were not taken into account. They were deceived. Liberation theology finds this [communal] model, this model of liberated spaces, as a breeding ground to flourish.

Liberation theology brings its vision to the project as well: it is not enough to liberate geographical spaces, we must liberate non-tangible spaces: the hearts and minds of the people. When people learn about the historical figure of Jesus – his passion for the liberation of humankind, a Jesus with flesh and bones who walked with his people, suffered with the people, and rejoiced with the people – that is the figure who also liberates non-tangible spaces.

I believe that one of the failures of the progressive processes that emerged in Latin America is the lack of sociological and political emancipatory formation within the popular sectors. In fact, it is not me who says this, it is the Brazilian theologian Frei Betto who argues this.

The political subjects, the ones who will make the territory free, have been neglected as far as their sphere of ideas or spiritual dimension is concerned. After all, the point is not to liberate geography. Geography is a space where we can begin a process of transformation. When Jesus wanted to instruct his disciples, he took them to a secluded field or walked with them down a quiet path. He took advantage of the space, of that time when there was no noise, where nothing was there to interrupt them, and opened a space for non-tangible liberation.

Chávez thought along the same lines: we must free up spaces for men and women who live in the middle of the city and are assaulted by consumerism. In those spaces, people cannot free themselves, they are prisoners, their brains bear the scars of colonialism.

If you could enter the brain of a young man who has been trained in the capitalist model, you would find the geography of Caracas there, with the highways full of billboards advertising big transnational corporations. That is the brain of a person who is colonized by the world of capital: it is pointless to live a revolutionary process if one continues to be a slave to capitalist consumerism, sigh for the “American dream,” believe that the best is abroad, think that Venezuela is a bankrupt and worthless country.

Thus, the communal project and fostering an emancipatory spirituality are two elements that must go together if we really want an emancipated project for Venezuela. There the decolonization of the mind and spirit play a pivotal role.