The U.S. left Afghanistan’s Bagram Airfield after nearly 20 years by shutting off the electricity and slipping away in the night without notifying the base’s new Afghan commander, who discovered the Americans’ departure more than two hours after they left, Afghan military officials said.
…

“We (heard) some rumor that the Americans had left Bagram … and finally by seven o’clock in the morning, we understood that it was confirmed that they had already left Bagram,” Gen. Mir Asadullah Kohistani, Bagram’s new commander said.
…
Before the Afghan army could take control of the airfield about an hour’s drive from the Afghan capital Kabul, it was invaded by a small army of looters, who ransacked barrack after barrack and rummaged through giant storage tents before being evicted, according to Afghan military officials.

“At first we thought maybe they were Taliban,” said Abdul Raouf, a soldier of 10 years. He said the the U.S. called from the Kabul airport and said “we are here at the airport in Kabul.”

There is video from the empty base. Hundreds of cars were left behind. The network equipment in the headquarter was ripped out but the base hospital seems to have been left intact. There are even some useful medical supplies stocked there.

Meanwhile the Taliban continue their blitz operation to take over the country. They snatch up district after district especially in the north. 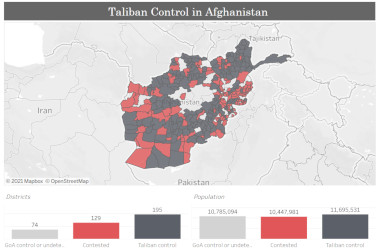 I had noticed that two weeks ago:

Remarkably a lot of the districts the Taliban took were not in primarily Pashtun regions but in the north where the population is often Uzbek, Tajik or from other ethnic minorities. Before the U.S. invasion those populations were often anti-Taliban.

The Taliban have probably some 3-4,000 fighters in the north-eastern Badakhshan province but they managed to take 90% of it in just 4 days, 14 of its districts fell in the last 48 hours. Some 1,500 Afghan government soldiers stationed there have fled to Tajikistan. The province capital Faizabad is now isolated and the only place that is still under government control. 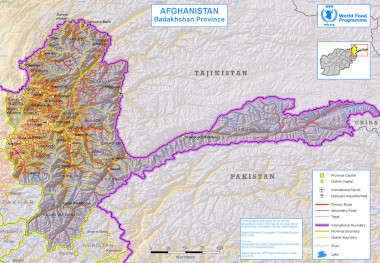 Something is quite curious with this. Badakhshan was a stronghold of the Northern Alliance which in the late 1990s fought against the Taliban. It is the home of the Jamiat-e Islami party which consists mostly of ethnic Tajiks and has its own militia. The leader of Jamiat-e Islami is Salahuddin Rabbani who is now also the chair of the government’s Afghan High Peace Council which negotiates with the Taliban.

The mountainous province has 1 million inhabitants. But here are 4 Taliban showing up in a car in the remote Wakhan district. They are not opposed by local militia but are welcomed by the local (male) population.

It is inconceivable that a brigade size Taliban force can seize Badakhshan in a few days and at little cost without having a deal with the militia of the dominant local party. Something must have happened behind the curtains that the media is not aware of.

This is good news as a fast Taliban victory in the north will make a new civil war less likely. The neoconservative Long War Journal is aghastas it explains:

Afghanistan is at risk of complete collapse after the Taliban has made dramatic gains in recent days, striking at the heart of the Afghan government’s base of power in the north while seizing control of large areas of the country – often unopposed by government forces.
…
Much of the Taliban gains have occurred in the north. The importance of the Taliban’s northern thrust cannot be understated. The Taliban is taking the fight directly to the home of Afghanistan’s elite power brokers and government officials.

I currently do not think that there will be a long ‘siege of Kabul’ but a negotiated transfer of power.

The events of the last weeks show a more or less controlled retreat or defeat of demoralized government forces and a systematic takeover of most of the countryside and district centers by well prepared Taliban forces. Only the bigger province capitals have not yet fallen though some think that Mazar i-Sharif, the capital of Balkh province, will fall tonight.

It seems that there is a willingness of at least certain parts of Afghanistan’s current government to let the Taliban take over the country without much of a fight.

That gives me hope that a further long conflict will be avoided. After more than 42 years of war Afghanistan needs peace. While the Taliban rule is harsh it is also somewhat just and certainly less corrupt than the U.S. imposed structures. Afghanistan must be given time to find a new balance from which it can then develop in a way that fits the local circumstances and the local peoples’ tradition and morality.

The last 42 years have shown that nothing else will work.