The authors of a study published Sept. 30, in the European Journal of Epidemiology Vaccines said the sole reliance on vaccination as a primary strategy to mitigate COVID-19 and its adverse consequences “needs to be re-examined.”

A study published Sept. 30, in the peer-reviewed European Journal of Epidemiology Vaccines found “no discernible relationship” between the percentage of population fully vaccinated and new COVID cases.

In fact, the study found the most fully vaccinated nations had the highest number of new COVID cases, based on the researchers’ analysis of emerging data during a seven-day period in September.

The authors said the sole reliance on vaccination as a primary strategy to mitigate COVID-19 and its adverse consequences “needs to be re-examined,” especially considering the Delta (B.1.617.2) variant and the likelihood of future variants.

“Other pharmacological and non-pharmacological interventions may need to be put in place alongside increasing vaccination rates. Such course correction, especially with regards to the policy narrative, becomes paramount with emerging scientific evidence on real-world effectiveness of the vaccines.”

As part of the study, researchers investigated the relationship between the percentage of population fully vaccinated and new COVID cases across 68 countries and 2,947 U.S. counties that had second dose vaccine, and available COVID case data.

For seven days preceding Sept. 3, researchers computed COVID cases per one million people for each country, as well as the percentage of population that was fully vaccinated. 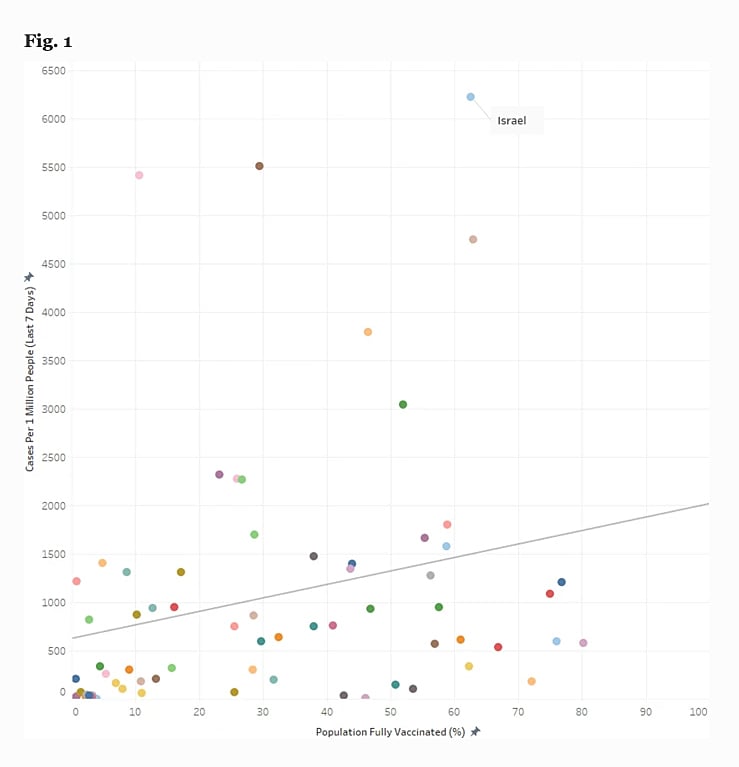 Relationship between cases per 1 million people (last 7 days) and percentage of population fully vaccinated across 68 countries as of September 3, 2021

Notably, Israel with more than 60% of its population fully vaccinated, had the highest COVID cases per 1 million people during the seven-day period.

Iceland and Portugal, with more than 75% of their populations fully vaccinated, had more COVID cases per 1 million people than countries such as Vietnam and South Africa, where only about 10% of the population is fully vaccinated.

Across U.S. counties, the median new COVID cases per 100,000 people during the seven-day period was similar across the categories of percentage of population fully vaccinated. 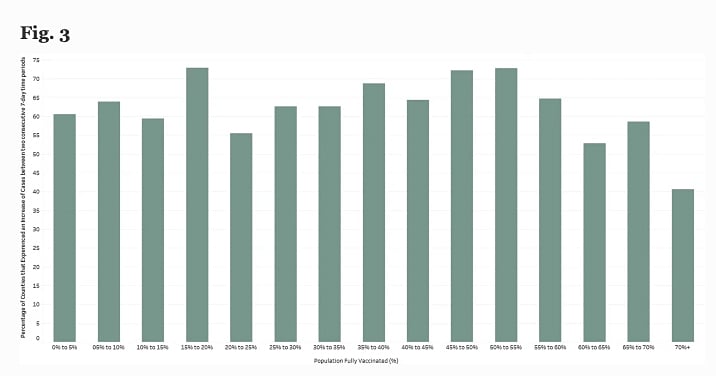 Percentage of counties that experienced an increase of cases between two consecutive 7-day time periods by percentage of population fully vaccinated across 2947 counties as of September 2, 2021

Of the top five counties with the highest percentage of population fully vaccinated (99.9% – 84.3%), the Centers for Disease Control and Prevention (CDC) identified four as “high” transmission counties.

The findings also showed no discernible association between COVID cases and fully vaccinated rates when a one-month lag was considered, to account for the 14-day period it takes for a vaccine to be considered effective.

The authors cited data from the Ministry of Health in Israel showing the effectiveness of two doses of Pfizer’s COVID vaccine against preventing SARS-CoV-2 infection was reported to be 39% — substantially lower than the reported trial efficacy of 96%.

Emerging research also shows immunity derived from Pfizer’s COVID vaccine may not be as strong as natural immunity acquired through infection.

A substantial decline in immunity from mRNA vaccines six months post immunization has also been reported along with an increasing number of breakthrough cases among the fully vaccinated, the researchers said.

The authors said stigmatizing populations over vaccines can do more harm than good, and non-pharmacological prevention efforts needs to be renewed in order to learn to live with COVID “in the same manner we continue to live 100 years later with various seasonal alterations of the 1918 Influenza virus.”

The number of vaccinated people testing positive for COVID is on the rise, and doctors in Ohio are reporting more breakthrough cases across hospital systems.

However, only certain types of COVID breakthrough cases are reported at both the state and federal level, leaving patients with mild cases underreported.

“We estimate anywhere from two to 10 times as many positives that are being reported is the real situation,” said Dr. David Margolius, division director of internal medicine at MetroHealth in Cleveland.

“It’s still rare, but I get a dozen COVID positive cases a day in my basket, and usually three or four of them have been vaccinated,” said Margolius.

The Ohio Department of Health and the CDC only report breakthrough cases in patients requiring hospital admission, or cases that resulted in death.

The CDC said it made the change in May in order to “maximize the quality of data collected on cases of greatest clinical and public importance.”

As of Sept. 27, the CDC had received reports from 50 U.S. states and territories of 22,115 patients with COVID vaccine breakthrough infection who were hospitalized or died.

Double your impact! When you make a donation to Children’s Health Defense, your donation will be matched — up to $2 million! Donate Now!
The CDC said the number of COVID vaccine breakthrough infections reported to the agency are an undercount of all SARS-CoV-2 infections among fully vaccinated persons, especially of asymptomatic or mild infections.

In addition, national surveillance relies on passive and voluntary reporting, and data are not complete or representative, according to the CDC.

Massachusetts health officials on Tuesday reported nearly 4,000 new breakthrough cases over the past week, and 46 more deaths, according to NBC Boston.

This brings the total number of breakthrough cases in Massachusetts to 40,464 — out of 4.63 million vaccinated people — and the death toll among people with breakthrough infections to 300.

According to the Vermont Daily Chronicle, which cited statistics from Vermont’s Department of Health, 76% of the state’s COVID fatalities in September were breakthrough cases, with just eight of the 33 Vermonters who died being unvaccinated.

As of Tuesday, 88% of all eligible Vermonters age 12 and over had been vaccinated with at least one shot.

Health Department spokesperson Ben Truman said most of the vaccine “breakthrough” fatalities were elderly. Because they were among the first vaccinated, Vermont’s elderly “have had more time to potentially become a vaccine breakthrough case,” he said.

According to The Washington Post, Dr. Peter Marks, director of the U.S. Food and Drug Administration’s (FDA) Center for Biologics Evaluation and Research, said Tuesday updated data might make a strong case in support of everyone 18 and older being eligible for COVID vaccine boosters, but the agency will have to see whether its outside advisers agree.

The remarks from Marks came during a webinar as the FDA prepares to meet Oct. 14 and 15 with its outside advisers to discuss authorizing Moderna and Johnson & Johnson COVID booster shots.

Megan Redshaw is a freelance reporter for The Defender. She has a background in political science, a law degree and extensive training in natural health.