This week, a beleaguered Boris Johnson administration reacted to calls for his resignation by announcing it will defund Britain’s public broadcaster and further militarise the Franco-British border. With many speculating it is a matter of when, not if, Johnson falls, it is important to recognise that such populist policies, launched to placate the right-wing media and others, are consistent with a pattern of entrenched impunity by this government: in the policing of borders, the police, the judiciary, equalities, and human rights. To help understand the sheer proliferation of government measures and proposals put forward over the past year, this week IRR News published a five-part resource, Impunity Entrenched, compiled by IRR vice chair Frances Webber. These measures, informed by an ideology of punishment and exclusion, will destroy the right to asylum, fill prisons, further divide society and exacerbate racial tensions and hatred, while entrenching the powerful by blocking routes to political, legal and public accountability. What they all share is a retreat from values of fairness, equality and basic human decency, in favour of strong-arm policing of minorities and dissent at home, abroad and on the borders, within a punitive, crude, nationalistic political culture.

Whilst such attacks will continue irrespective of the crisis convulsing the Conservative Party, so too will a growing wave of popular opposition, much of which we chart in our regular calendar of racism and resistance. Crucially, the scope of the ‘Kill the Bill movement’ has widened to oppose not only the Police, Crime, Sentencing and Courts bill but also the destructive Nationality and Borders bill, which expands policies of exclusion, criminalisation and deportation. A whole range of organisations, working in different fields are bringing their expertise to the table, with campaigners joining the dots, making connections between various pieces of legislation, and the logic that underpins it. They have also drawn attention to the Elections bill’s flagrant attack on the voting rights of vulnerable and marginalised communities, passed in the Commons. ‘Voting fraud is as rare as hen’s teeth in this country’, concludes Frances Webber in part 3 of Impunity Entrenched, where she warned that ‘the bill’s true purpose is to suppress voting among poor, black and disaffected voters, as commonly happens in the US.’

This is our first newsletter of 2022. To find out more about the IRR’s work and what we’ve been up to over the past year, find our Annual Report online. 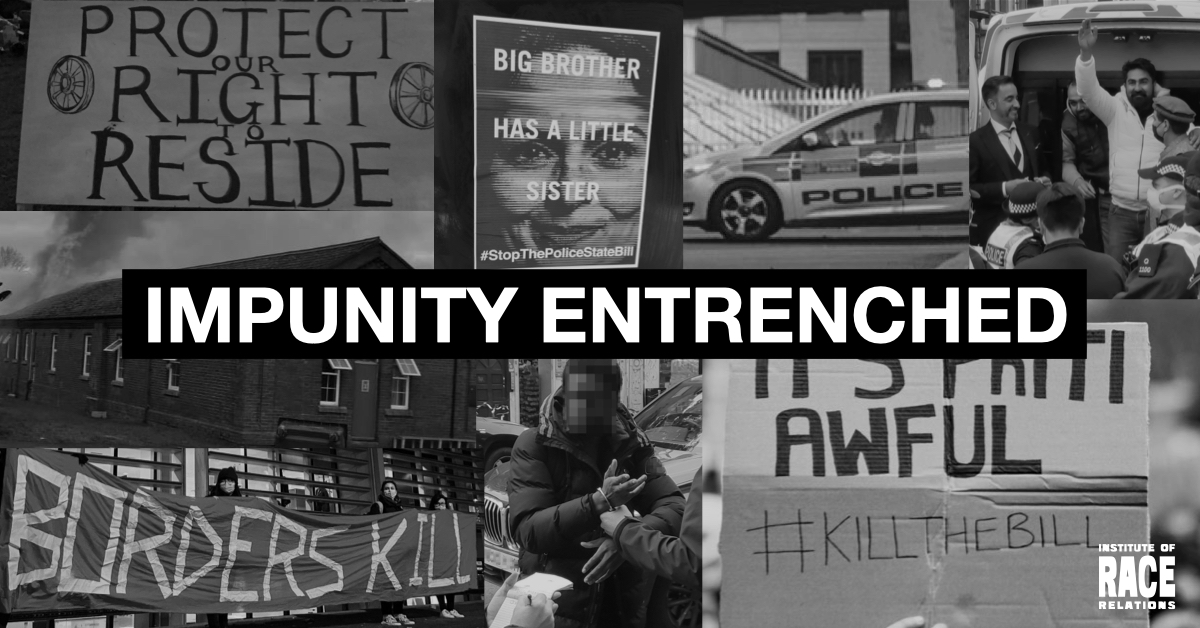 As 2022 begins, its difficult to keep up with the legislative and policy changes threatening human rights. To help understand the sheer proliferation of government measures and proposals put forward over the past year, the IRR publish a five-part resource, Impunity Entrenched, authored by IRR Vice-Chair Frances Webber looking at Borders and Immigration, Policing, Ministerial impunity and the rule of law, Free expression andequalities, and Human Rights. 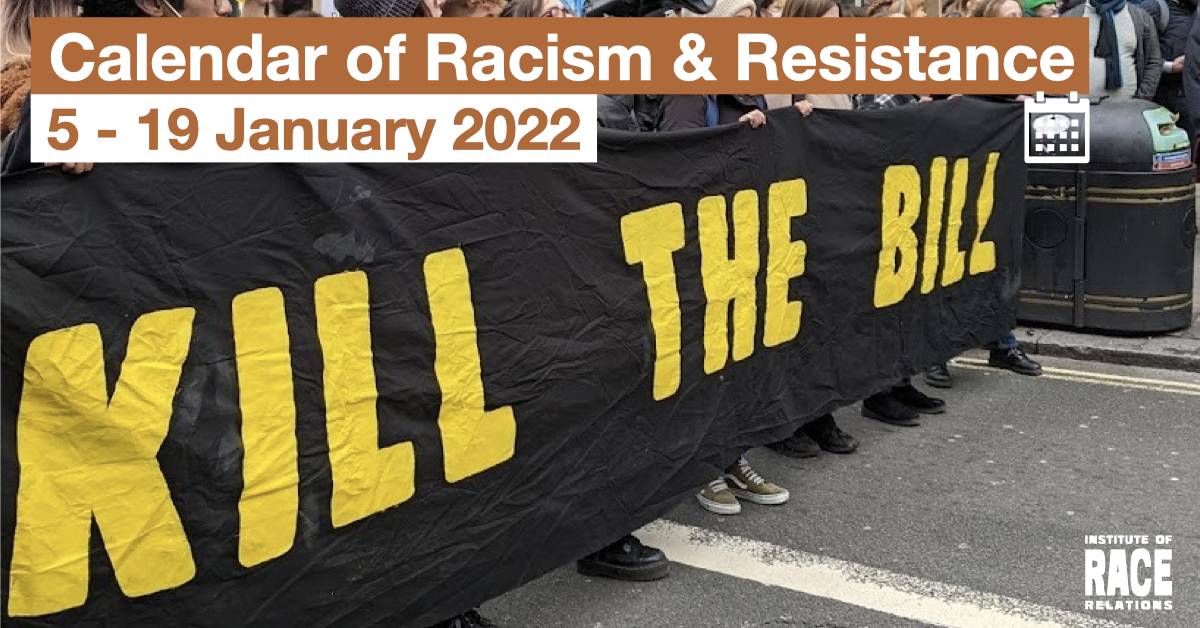 In this week’s calendar, the policing and criminal justice section documents the mounting challenges to the police bill. With many also focused on the Nationality and Borders bill, campaigners and former immigration detainees made sure that the opening of a new women-only immigration removal centre in County Durham was not forgotten. Meanwhile in Cyprus, there are calls for international support for Syrians in Chloraka, living in a climate of fear and threatened with eviction after a ‘Put Cypriots First’ rally.

As the Polish parliament passes an education bill to step up government control of schools, which critics say would prohibit teaching on LGBTQ topics, read an interview with Sophia Siddiqui on reproductive racism – showing how LGBT communities, immigrants, Muslims and feminists are being increasingly constructed as ‘threats’.

You can also read her Race & Class piece on reproductive racism, which shows how education which addresses LGBTQ issues has been demonised and wilfully misconstrued through moral panics in parts of Europe. Enjoy free access to the article for a very limited period.