“What happens if the Russians and the Chinese target satellites? Will this be a threat to Starlink?” – such a question was asked by journalists to Elon Musk in connection with the conduct of a Russian special operation in Ukraine. The answer was:

“It was interesting to look at the Russian anti-satellite demonstration a few months ago in the context of this conflict. Because it caused a lot of controversy among satellite operators. It even posed some danger to the space station where the Russian cosmonauts are located. So why did they do it? This was a message before the aggravation of the situation in Ukraine. If you try to disable Starlink, it won’t be easy because we already have over 2 satellites. That means a lot of anti-satellite missiles. I hope we don’t have to test this in practice, but I think we can launch satellites faster than they can shoot them down with anti-satellite missiles.”

Battle for supremacy in space

As has been repeatedly said, dominance in outer space is the basis of dominance on the surface of the planet. And this is confirmed during the conflict in Ukraine. The Armed Forces of Ukraine (AFU), not having their own orbital grouping, but receiving data from US intelligence satellites, through US communications satellites, are able to resist the technically superior armed forces of the Russian Federation (RF Armed Forces) by an order of magnitude, inflicting quite sensitive strikes from time to time .

It is believed that Starlink satellites cannot be used for reconnaissance, although this statement cannot be unconditionally trusted, but even their use as a means of communication is a significant help to the enemy, and Starlink terminals in Ukraine, according to some reports, there are already thousands. 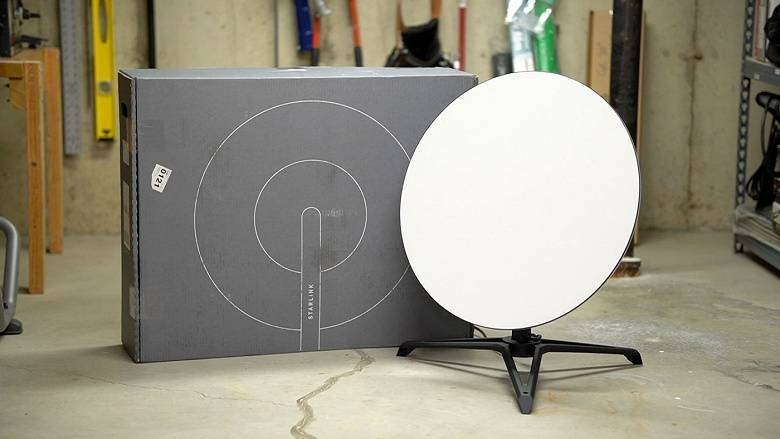 But there are other small, cheap, commercial satellites that can be used for such purposes, as this conflict has shown.

What will happen if the RF Armed Forces collide in a limited conflict that does not involve the use of nuclear weapons with NATO? With an adversary who will have sufficient stocks of long-range strike weapons?

In this case, the presence of a highly effective reconnaissance satellite constellation of reconnaissance, communications and control will allow the enemy to destroy Russian troops without entering into direct combat contact. Aircraft will be destroyed at airfields, ships and submarines will die before they leave their bases, ground forces will not be able to create any large shock fist, move with significant forces, and organize an effective supply of fuel and ammunition. Surface ships at sea will also be guaranteed to be detected and destroyed from a distance exceeding the range of their detection tools…

On the other hand, the US Armed Forces without satellites, without intelligence received from orbit, without space-based communication systems, will lose a significant part of their advantages – they will not receive target designation of long-range precision-guided munitions, unmanned aerial vehicles (UAVs) will not be able to operate beyond the radio horizon or out of range actions of the communications equipment of the repeater aircraft, many horizontal and vertical communications will disappear in multi-domain forces.

This conflict has also demonstrated the vulnerabilities of NATO doctrine. Russian weapons, while not as sophisticated, are far more resilient. By denying NATO air superiority and blocking its satellites, the ground army would not be much of a problem.

How can Russia counter the US in space? Surpass the number and quality of reconnaissance satellites? This is impossible, we will not be able to produce and put into orbit satellites even in an order of magnitude less than the United States and other Western countries. And the presence of its own developed satellite constellation does not negate the superiority of the United States and NATO in the number of long-range precision weapons and UAVs.

Jamming enemy satellite constellations by means of electronic warfare (EW) and blinding with lasers? So far, nothing has been heard about this – nothing like this is used in Ukraine. Functional defeat in general is not a very reliable thing, and it is difficult to assess the effectiveness of suppressing enemy reconnaissance and communications equipment at any given time.

All that remains is the physical destruction of enemy spacecraft, but there are a number of problems here too.

Existing means can destroy one, ten, one hundred satellites, but what if there are thousands of them – tens of thousands? A situation will arise when putting new satellites into orbit will indeed be cheaper than destroying them, even if one anti-satellite missile will carry several interceptors. The advantage will be with those who can both produce satellites cheaper and put them into orbit cheaper.

Based on the foregoing, it is necessary to ensure a radical reduction in the cost of destroying enemy spacecraft, primarily in low orbit. This can be achieved on the condition that one orbital interceptor destroys not one, but several dozen, or better, several hundred enemy satellites.

Massively launched into orbit satellites are deployed in clusters from one launch vehicle and then are separated into their orbits. Knowing their orbit, you can launch an interceptor spacecraft in such a way that it alternately flies past the satellites that you want to destroy. At the moment of flight at a minimum distance, the interceptor will release a compact and inexpensive ammunition, which will destroy the enemy satellite. The interceptor itself will then go to the next satellite, then to the next, and so on, and so on, until it runs out of ammunition.

Small low-orbit satellites are massively deployed in clusters from one “large” carrier.

The Reaper-type orbital interceptor must include radar and / or optical means of detecting and tracking a target, fuel and attitude control / flight path correction engines, an instrument compartment and a weapon compartment 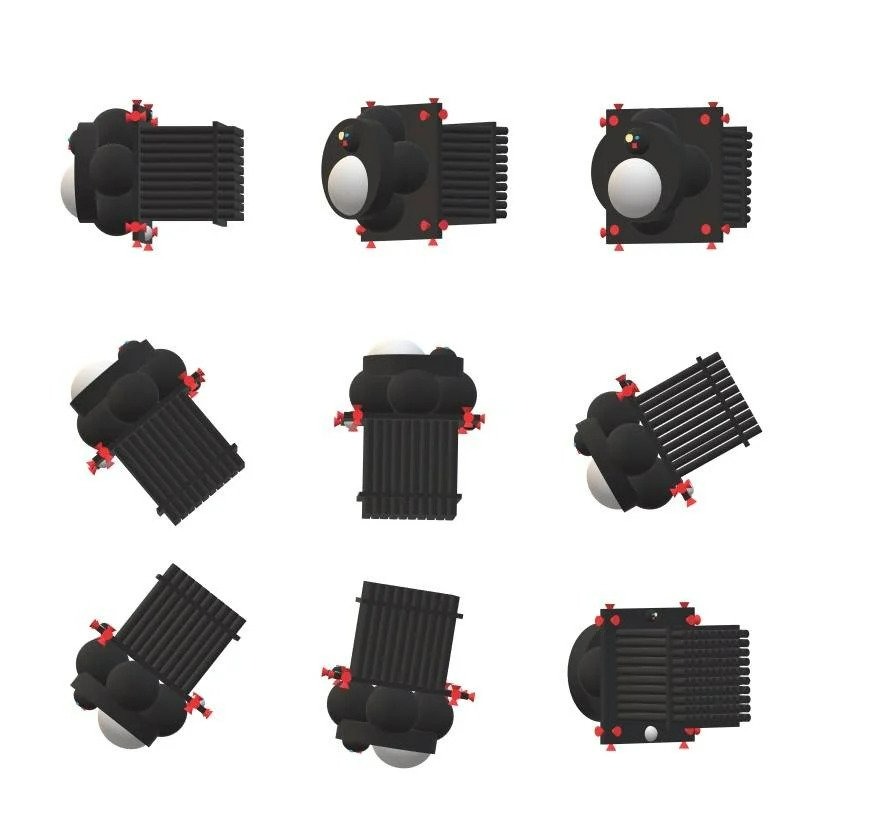 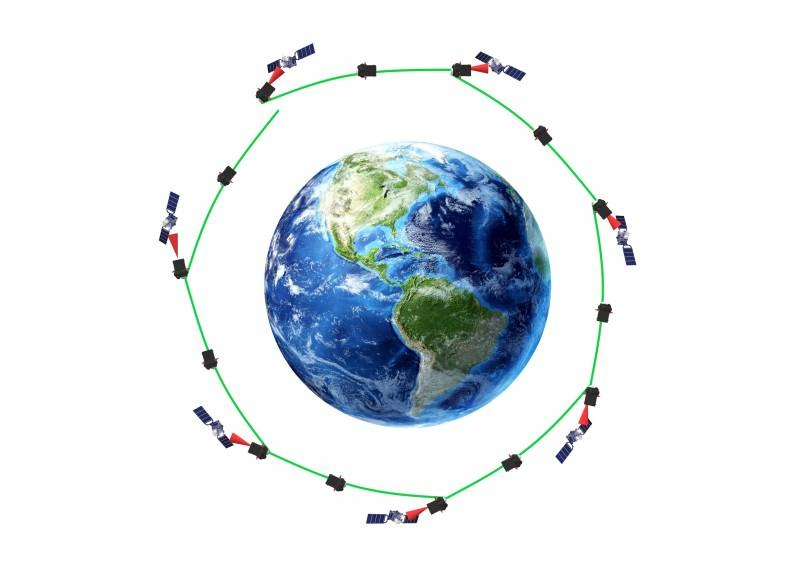 Possible scheme of operation of the orbital interceptor “Reaper”

The Reaper orbital interceptor can use various types of ammunition. In the simplest case, this can be shrapnel ammunition, the easiest to manufacture and, accordingly, the cheapest. However, it is possible that the range and accuracy of shrapnel ammunition will not be enough.

Ultimately, the type of ammunition used must be determined by the results of calculations and tests. It is possible that the ammunition load of one Reaper orbital interceptor may include several types of guided and unguided munitions.

One interceptor can potentially carry hundreds of damaging ammunition. For example, if the diameter of the launcher of one ammunition is about 150 mm, then a package of 100 ammunition in the 10×10 format will be a square with a side of just over 1,5 meters, respectively, a package of 400 ammunition will have a dimension of a little more than 3×3 meters. 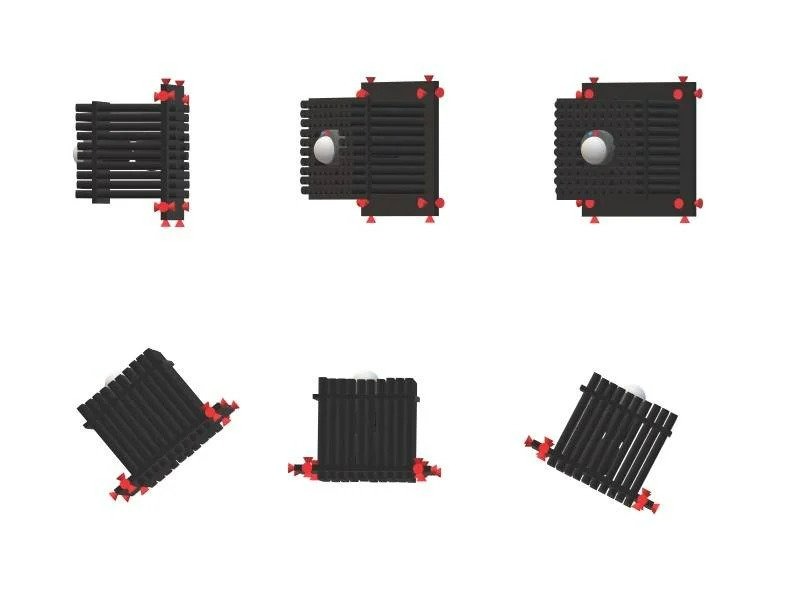 Of course, the enemy can try to destroy the orbital interceptors – this can be implemented in several ways.

The first is equipping satellites with self-defense systems. But this will make them complex and expensive, since they will need reconnaissance equipment, weapons, and so on, and this contradicts the very concept of massive and inexpensive satellites.

The second is the destruction of an orbital interceptor by an anti-missile launched from a land, sea or air carrier. To counter this threat, the orbital interceptor can launch small-sized decoys with corner reflectors and Luneberg lenses that increase the effective dispersion surface (ESR) of the simulators, as well as thermal emitters designed to deceive the thermal homing heads of interceptor missiles. At the same time, the orbital interceptor itself can be covered with a screen that reduces its thermal and radar visibility when viewed from the earth’s surface.

The third option is the creation by the enemy of their own orbital interceptors. It will be more difficult to make such ones to destroy the maneuvering orbital anti-satellite interceptor of the Reaper type, but sooner or later it will come to this. However, this will already be the next round of space confrontation.

If enemy satellites are to be launched by the thousands, then Reaper Orbital Interceptors must be launched by the tens, maybe hundreds. In case of a sudden attack, the enemy simply will not have time to hit them all, especially considering that both the “provocateur” interceptors mentioned above and simply false targets can be launched at the same time. The advantage of space is that it is much more difficult to distinguish a light decoy in space than in the atmosphere.

It is not known what the Chinese will do, although the call to create counter-measures has already been made in their specialist press, the Russians are simply obliged to target US and NATO satellites, which definitely include Starlink satellites. Depending on the development of the military-political situation, we simply may not have any other way but to clear the orbit.

One thought on “Neutralising Star Link”