Below is a slightly edited machine translation of a piece which appeared yesterday on the Ukrainian side censor.net. The piece was promoted by Yuri Butusov, a well known Ukrainian military correspondent. It is originally a social media post by someone who was on the frontline in Pisky, immediately northwest of Donetsk city.

Over the last two to three months the Ukrainian side has used its positions in the vicinity of Donetsk city to more or less randomly shell the civilian population on the Russian affiliated side. After some serious protests the Russian military command agreed to launch a dedicated counter-artillery operation to shut down the deadly Ukrainian harassment.

Its daily ‘clobber reports’, here is yesterday’s, have since included lines like these on nearly each and every day:

As part of counter-battery warfare 2 artillery batteries of Giatsint howitzers near Dzerzhinsk and Novhorodskoye, Donetsk People’s Republic have been hit.

The Russian side has also changed the primary direction of its thrust from the northern front of the Sievierdonetsk-Lysichansk-Siversk direction to a push further south. The current offensive operation is concentrated north-west and west of Donetsk city in the direction of Avdivka. There is an envelope operation going on north and south to surround that extremely heavily fortified town.

The red territory to the left of the red line marks parts of recent progress. 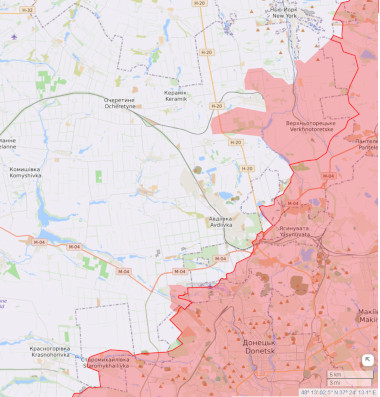 Pisky is the southern part of that envelope operation. 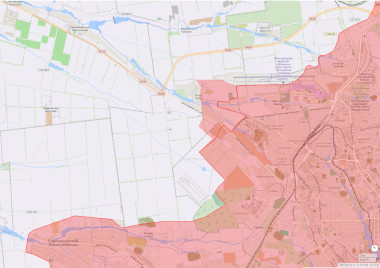 Following intense artillery preparations Russian forces are currently – slowly, slowly – clearing the lines of reinforced concrete bunkers and ditches that have been build on the Ukrainian side over the last 8 years. Here now is the view of that battle from the Ukrainian side (edited machine translation, for an alternative translation see this.) (Note: 300 is the military cargo designator for wounded people, 200 is for dead soldiers):

What is there to lose, what else can be taken from me on the sixth day of my personal hell, in Pisky, a kilometer from the first street of Donetsk, Ukraine? The bodies of those who were dearer to me than my family are lying under the heat in the trenches, broken by 152 caliber. As I wrote earlier, 6,500 shells per damn village in less than a day.

It’s been six such days already, and I can’t imagine how even a small number of our infantry survived in this barrage of enemy fire.

No, I’m not whining.

Sometimes they wake up and “sneeze” two artillery barrels in the direction of Donetsk.

We hardly respond. There is no counter-battery fire, from the word go, the enemy puts artillery shells in our trenches without any problems, dismantles very strong, concrete positions in tens of minutes, pushing our defense line without pause or minimal rest.

The day before yesterday, the line broke, and a river of 200 or 300 [killed/wounded] was poured. I will not publish any statistics, it is forbidden in our country, but you have no idea the number and percentage of losses.

This is a hell of a meat grinder, where the battalion simply holds back the onslaught with their bodies.

For almost a week, we have been waiting for at least some kind of help that would hit the enemy’s artillery, we, I repeat, are being fired with impunity with everything that the Russian military system is rich in, their aviation was working today.

I am proud of the leadership of the battalion that remained here with us. The combatant is with us, everyone is with us, contused, light 300, bandaged and returned after a couple of hours to the position, if you can call these bottomless ravines that way.

There is a war going on.

But without a counter-battery fight, it turns into a senseless meat grinder, where an insane amount of our infantry is ground up in a day.

Did you really want the truth? Here it is, the naked truth.

The reserve goes to the position, closes the breakthrough, and after five minutes, only one of the 15 people remains intact.

The bodies lie on the ground. If it’s a light 300, maybe you’ll be lucky, you’ll faint, and you’ll get out on foot, you’ll reach the medics.

They just took a three hundredth [one wounded]. He shouted all the way: – “Where is the support? Where is the artillery? Why were we abandoned? Why didn’t anyone cover us?”

I don’t know, my friend, why no one covered us… He screams, and I’m ashamed that I’m still safe and sound, only a couple of good deafening.

I threw up, I pissed myself, I’m sorry, and I’m back in action.

All reserves are destroyed, military equipment is on fire, the enemy approaches and without any problems occupies our positions after another barrage of artillery.

Right now we are losing Pisky, all our human and material resources are almost exhausted.

Denys, a resident of Mariupol, who told me “well, I trust the arrestee [Zelenski advisor Arestovich], we will return everything back very soon” is dead. He was wounded twice, they bandaged him right in the trench, they told him, Denchyk, go to the evacuation, but he answered “guys, I will not abandon you.”

Both wounded for the first time, and after the second wounding, he continued to shoot back.

We still haven’t taken his body. On the ruins of Pisky, he lies with his arms outstretched and his gaze frozen. He asks for revenge. How can I refuse his latest request? How can we all leave Dan?

I believe that Dimka survived after all. Because he could not die, having recently returned from the hospital, having just proposed to his girlfriend. They say that after one of the parishes he simply disappeared. It fell asleep with earth. But, I believe that this is a mistake, and he is alive. Foolish hope and expectation.

I know, my country does not like to think aloud. But, I was left with no choice between victory and arrest. The truth should be heard, not whispers in the kitchen. Of course, he will fly separately for this post, because how? Yes, does the state lie to its own citizens?

I won’t be surprised if someone says today: “Kremlin agent Sirozh talked about the brilliant plan of the victors on the Donetsk front, let’s hang him on the Peacemaker.”

I amused to say that everything is under control. Now in Pisky, everything is not under anyone’s control, but for some reason the situation is being hushed up.

Ring broken bells while we cover Pisky with bodies.

Give us something here to hold on to.

Now put yourself into the position of Serhiy Gnezdilov, Denys or Dimka. Then think about the politicians who sweet talk of heroic Ukrainian resistance and send these men to be slaughtered for no possible gain.

Sorry Serhiy, more artillery wont do it. The Russian side would just grind it up within days. How many of the 120 U.S. M-777 howitzers that were given to Ukraine still exist? Maybe 10 or so, most of them damaged?

There are other operations going on. North of the Donetsk front there is a thrust towards Bakhmut (also known as Artomovsk). Yesterday Soledar, north of Bakhmut was reported to be mostly captured. Vershyna and Zaiseve, south of it, are also gone or will fall soon. 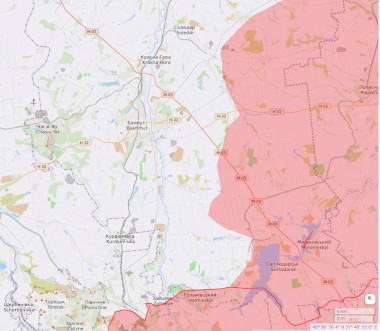 The Ukrainian side has loudly announce an upcoming counter offensive on the southern front towards Kherson city. But the number of Russian units in that larger area have since been increased to a level that makes a new Russian offensive towards Mykolaiv (Nikolaev), Kryvyv Rih (Krivoy Rog) or Zaporitzhia more likely than anything the Ukrainian side could possibly do. 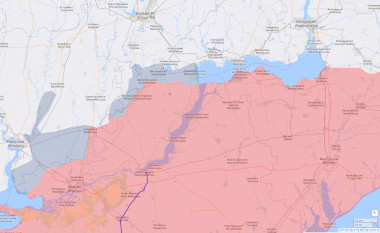 As a result of Russian Aerospace Forces strike on combat positions of 54th Mechanized Brigade of AFU near Mar’inka in Donetsk People’s Republic, more than 50 nationalists of 2nd Battalion of this unit have been destroyed.

High-precision weapons of the Russian Aerospace Forces struck on a temporary deployment point of the Ukrainian Foreign Legion near Nikolaev city. The attacks have resulted in the elimination of up to 250 nationalists and 20 units of military equipment.

High-precision strikes of the Russian Aerospace Forces have eliminated up to 500 nationalists of 92nd Mechanised Brigade of AFU and large amount of military equipment in Merefa and Chuguyiv in Kharkov Region.

Shelling of combat positions of 16th Battalion of 58th AFU Motorized Infantry Brigade near Artemovsk have resulted in the elimination of over 130 nationalists. The remaining battalion servicemen, numbering up to 70, hurriedly left their positions and departed for Konotop, Sumy Region, where they were disarmed and declared deserters.

21st Battalion of 56th Motorized Infantry Brigade, which had suffered significant losses near Peski, came under artillery fire of AFU during its retreat to Vodyanoye and was almost completely eliminated.

Notice the last paragraph. The unit in Pisky (Peski), where Serhiy Gnezdilov reported from, was retreating towards Vodiane (Vodyanoye), north of Pisky (see the second map above). On their way the Armed Forces of Ukraine (AFU) opened fire on them, killing nearly everyone who had survived the Russian attacks against Pisky.

Was this punishment for the already late retreat? Or was it a misidentification by a forward artillery observer who thought that those retreating Ukrainian forces were attacking Russian units? I don’t know, but …

By the way – the opponent casualties numbers given by the Russian ministry of defense are likely over estimated (as all such numbers are). But even if only half of those ~900 claimed yesterday really were wounded or killed on the day before the losses are still devastating. In 1967, at the very hight of the Vietnam war, U.S. casualties, dead and wounded, were at maximum about 200 per day. We see a multiple of those on the Ukrainian side each and every day.

This is not sustainable. The Ukrainian government should have given up the uneven fight months ago. It is an immense crime to further urge it on.