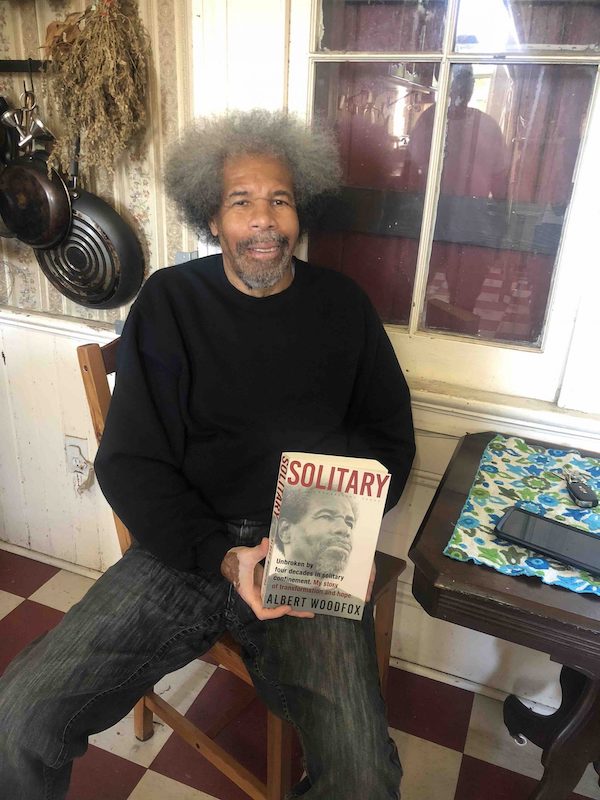 Who has not heard of the Angola Three, three young black prisoners who were falsely accused of killing a prison guard in 1972 in the infamous Louisiana maximum security prison cited at a former slave plantation—and named for the place where the African captives came from, Angola. On Thursday, August 4th, attorneys for Albert Woodfox announced his passing at the age of 75.

For over 43 years, Woodfox and several other black men were held in brutal solitary confinement, one of the longest held solitary prisoners on earth: 43 years, seven days a week, 23 hours a day. The United Nations Special Rapporteur on Torture has stated that any time above 13 days constitutes torture and a violation of international law: 13 days, 43 years.

How did Woodfox survive? He cites the teachings of the Black Panther Party, books by Frantz Fanon, Malcolm X, and Marcus Garvey, and lastly, the daily work they did for decades of calling down the tier to quiz guys on black history, on math, and spelling bees. In an interview in The Guardian, Woodfox said, “Our cells were meant to be death chambers, but we turned them into school, into debate halls.” By keeping their minds kept alive, they kept the beasts of madness at bay.

After a bitter court fight, Woodfox was free in 2016, and he returned to the remnants of his family. His daughter Brenda and her children and grandchildren greeted his return. He wrote a book entitled Solitary and spoke at colleges around the world about his time in Angola.

In his last six years of freedom, he thought more and more of his mother Ruby Mable Hamlin who died while he was in Angola. He called her his true hero. She was, he said, “functionally illiterate.” But he added, “I never saw a look of defeat in her face no matter how hard things got. I grew into my mother’s wisdom. I carry it within.” Albert Woodfox returns to his ancestors.

In love, not fear, this is Mumia Abu-Jamal.

These commentaries are recorded by Prison Radio.

More from this Writer

Mumia Abu Jamal is an award-winning broadcast journalist, essayist, and author of 12 books.

For the past 38 years, Abu-Jamal has lived in state prison. 28 of those years were spent in solitary confinement on death row. Currently, he’s serving life without parole at SCI Mahanoy in Frackville, PA. Abu-Jamal’s 1982 trial and its resultant first-degree murder conviction have been criticized as unconstitutionally corrupt by legal and and activist groups for decades, including by Amnesty International and Nobel Laureates Nelson Mandela, Toni Morrison, and Desmond Tutu.