We are experiencing a very hot and dry summer. Some people quite like it and for our governments there is nothing wrong yet. But actually, we should sound a big alarm. According to experts, if we do not change course soon, we risk ending up in the ‘climate end game’. In the meantime, the orchestra on the Titanic is continuing to play.

Worrying facts are piling up

France is in the grip of a third heatwave this summer. Temperatures exceed 40°C. The country is experiencing the worst drought in its history. In two-thirds of the departments, the water supply is in crisis. 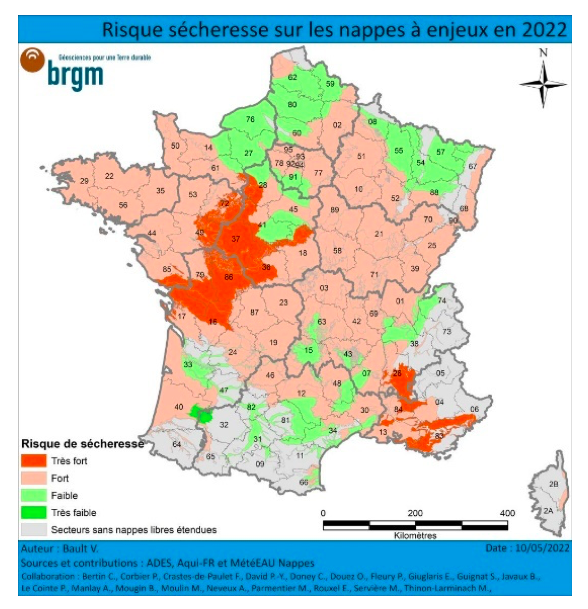 This year, 48.000 hectares of land have been burnt, which is seven times more than the usual amount. The output of the nuclear power plants on the Rhône and the Garonne has been temporarily reduced because there is not enough river water to cool the plants.

In Canada, temperatures also rose above 40C. That and the sustained drought and wildfires have had a detrimental effect on food production. There are crop failures and 80-per-cent mortality rates at some commercial shellfish operations. In the province of British Columbia, 400,000 chickens have died as a result of the extreme heat.

Italy is experiencing its worst drought since 2003, when a massive heatwave killed 30,000 people and destroyed agricultural produce. A third of agricultural produce is said to be at risk this year. In Switzerland, the army is deployed to prevent cow herds from dying of thirst.

At the beginning of August, the Netherlands declared a national water shortage. In Germany, the Rhine threatens to become unnavigable. In Poland, the authorities have already imposed restrictions on river transports because of the very low water level.

Due to exceptionally dry weather, many reservoirs in Norway have reached historically low water levels. As a result, the government has decided to limit the export of electricity to other countries until the reservoirs are replenished.

California is facing a chronic “mega-drought” in which dry years are becoming more frequent and wet years are becoming scarcer. The current drought, which started around 2000, is the second worst in the past 1200 years. This year alone, more than 140 square mile have burnt in more than 5,000 fires in California’s wine region.

Within three decades a quarter of the US land area and over 107 million people will be subjected to perceived temperatures of above 52C.

The unbearable heat of being 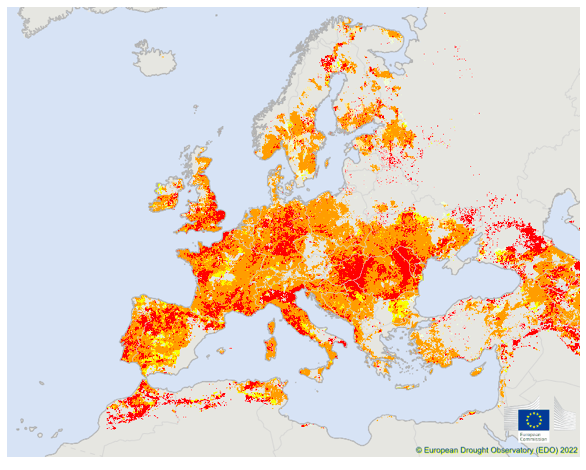 This will be the new normal. It is possible that within a decade every summer in Western Europe will be as hot and dry as this one. In addition to those heat waves, we will also have to deal with rain bombs much more frequently, as in Germany and Belgium last year.[ii]

Since the 1980s, exposure to deadly urban heat has tripled. It now affects nearly a quarter of the world’s population. Already five million people die each year from extreme weather, increasingly from heat-related causes.

According to the French Ministry of the Environment, the average air temperature will rise by 1.4 to 3 degrees Celsius by 2070. Precipitation will decline by 16 to 23 percent and river flows in the south of the country will fall by 30 to 50 percent. Similar numbers may be expected in neighbouring countries.

If the current evolution continues, agricultural yields could fall by 30 percent worldwide by 2050. About 5 billion people could face water shortages for at least one month a year.

Extreme heat – defined as an annual average temperature of over 29°C – would affect two billion people by 2070. By 2060, about 1.4 billion people could be climate refugees and by 2100, a fifth of the world’s population may be displaced as a result of rising sea levels.

And these are only conservative predictions. In recent years, climate scientists have found that extreme weather events are occurring faster than models had predicted. Initially it was assumed that temperatures and extreme weather events would increase gradually and linearly. It is possible that we have now entered a period where extremes will occur suddenly, more frequently and also more powerfully. 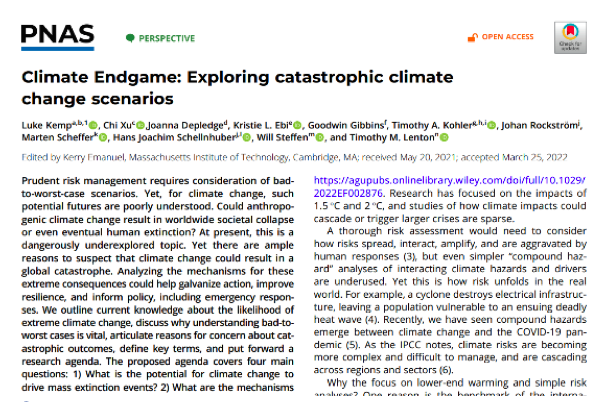 In a recent study, a group of scientists does no longer completely rule out a global societal collapse or human extinction. They call such a catastrophe the ‘climate endgame’. The probability of such a catastrophe may be small, but such scenarios cannot be ruled out, given the uncertainties in future emissions and the climate system.

A possible acceleration of warming is related to so-called tipping points[iii] and feedbacks.[iv] Certain tipping points could cause even an additional 8 °C global warming.[v]

According to those scientists “facing a future of accelerating climate change while remaining blind to worst-case scenarios is naive risk management at best and fatally foolish at worst”.

It is worth remembering that the amount of CO2 in the atmosphere is currently approaching the level there was 15 million years ago. Back then, temperatures were 3 to 4 degrees Celsius higher and the sea level was 20 metres higher.

“There are warnings from history. Climate change (either regional or global) has played a role in the collapse or transformation of numerous previous societies and in each of the five mass extinction events in Phanerozoic[vi] Earth history” according to scientists.

Much will depend on global climate efforts. The current trajectory puts the world on track for a temperature rise between 2.1 °C and 3.9 °C by 2100. If the existing pledges by countries are fully implemented, this increase will be 1.9 to 3 degrees Celsius. Provided all long-term pledges and targets were met, the warming would be 1.7 to 2.6 degrees Celsius.

“Even these optimistic assumptions lead to dangerous Earth system trajectories. Temperatures of more than 2°C above preindustrial values have not been sustained on Earth’s surface since before the Pleistocene Epoch (or more than 2.6 million years ago).”

A warming of more than 2°C is particularly alarming. Human societies are adapted to specific climatic environments. Since the emergence of large-scale, urbanised agricultural societies around 12,000 years ago, civilisations have developed within a narrow climatic framework with an average annual temperature of around 13°C.

Even today, the most economically productive centres of human activity are concentrated in such areas. According to the scientists, “the cumulative impacts of warming may overwhelm societal adaptive capacity”.

We are faced with a choice

UN Secretary-General António Guterres presents us with a choice: “We are on a catastrophic path. “We can either save our world or condemn humanity to a hellish future.”

To save the world from climate degeneration, a complete energy transition is needed that is much bigger and faster than any previous one in world history. In the next 30 to 50 years, 90 per cent or more of the world’s energy that is currently produced from fossil fuels will have to be provided by renewable energy sources, nuclear power[vii] or fossil fuel plants that bury their waste rather than emitting it.

According to Energy Transitions Commission, a prestigious think tank on global warming, less than 1 per cent of the world’s GDP[viii] annually is needed to become carbon neutral by the middle of this century. This is an insignificant amount to save the world from catastrophic climate change. By comparison, it is estimated that by 2020 the entirety of the stimulus packages in the rich countries in the context of the covid crisis accounted for more than 30 per cent of GDP.[ix]

Avoiding a climate catastrophe is thus absolutely possible, but it will require a drastic change of course. To date, tackling global warming has largely been left to market forces: emissions trading, carbon taxes, market-based development of green technology, etc. Obviously, this is not a successful strategy.

Moreover, one hundred multinationals are responsible for 71 percent of greenhouse gas emissions between 1988 and 2015. Another reason why green and cheap energy must become a public service, just like the low-carbon infrastructure and technology needed to deliver that energy. In the past, governments created other public services such as those for defence, public health, education, scientific research, …