In part one of my analysis of China’s economic future, I dealt with the claims that China would slow towards stagnation because its investment rate was too high, the working population was falling fast and the economy needed to become like mature Western capitalist economies based on consumption-led growth.  I argued that the Western capitalist model was hardly great shakes, given its regular and recurring crises and the much lower levels of consumption growth.  Anyway, in an economy, consumption does not lead investment and national output.  On the contrary, it is investment that leads in capitalist economies just as much as in China.

The reason that Western analysts are so sceptical of the Chinese model is that they are seeped in a different economic model for growth.  They are convinced that China can only be ‘successful’ (like the economies of the G7!) if its economy depends on profitable investment by privately-owned companies in a ‘free market’.  And yet the evidence of the last 40 and even 70 years is that a state-led, planning economic model that is China’s has been way more successful than its ‘market economy’ peers such as India, Brazil or Russia -and even the G7.

The lessons of the global financial crash and the Great Recession of 2009, the ensuing long depression to 2019 and the economic impact of the pandemic slump are that introducing more capitalist production for profit will not sustain economic growth and certainly not deliver ‘common prosperity’.  The real question is whether that investment is productive of new value or is wasted on unproductive consumption, eg property and financial speculation; and military spending.

And on this issue, it is China’s large capitalist sector that threatens China’s future prosperity.  The real problem is that in the last ten years (and even before) the Chinese leaders have allowed a massive expansion of unproductive and speculative investment by the capitalist sector of the economy.  In the drive to build enough houses and infrastructure for the sharply rising urban population, central and local governments left the job to private developers.  Instead of building houses for rent, they opted for the ‘free market’ solution of private developers building for sale.  Of course, homes needed to be built, but as President Xi put it belatedly, “homes are for living in, not for speculation.”

Beijing wanted houses and local officials wanted revenue. The capitalist housing projects helped deliver both.  But the result was a huge rise in house prices in the major cities and a massive expansion of debt.  Indeed, the real estate sector has now reached over 20% of China’s GDP.  China’s private property sector is now composed of ‘zombie’ companies just like 15-20% of companies in the major capitalist economies.  The question now is whether the Chinese authorities are going to allow these firms to go bust.  Local governments are now trying to ensure that the homes promised by the likes of Evergrande to 1.8m Chinese will be built by taking over the projects, while many property developers will be liquidated.

There is not going to be a financial crash in China.  That’s because the government controls the financial levers of power: the central bank, the big four state-owned commercial banks which are the largest banks in the world, and the so-called ‘bad banks’, which absorb bad loans, big asset managers, most of the largest companies. The government can order the big four banks to exchange defaulted loans for equity stakes and forget them. It can tell the central bank, the People’s Bank of China, to do whatever it takes. It can tell state-owned asset managers and pension funds to buy shares and bonds to prop up prices and to fund companies. It can tell the state’s asset companies to buy bad debt from commercial banks.  It can get local governments to take up the property projects to completion.  So a financial crisis is ruled out because the state controls the banking system.

The current property mess is a signal that the Chinese economy is becoming more influenced by the chaos and vagaries of the profit-based sector.  Just as in the capitalist economies of the West, the profitability of China’s capitalist sector has been falling.

And it is the private sector that has been doing badly during COVID and after. Profits in the capitalist sector have been falling.  Cumulative profits for the first eight months of 2022 earned by China’s industrial firms fell 1.4% compared with 2021, as high raw material prices and supply chain disruptions due to COVID-19 curbs continued to squeeze margins and disrupted factory activity. But profits at state-owned industrial firms rose 14%; while those in the private sector fell 9%. Only the state sector is continuing to deliver.  This is what also happened in the global financial crisis of 2008-9, which China avoided by expanding state investment to replace a ‘flailing’ capitalist sector.

The capitalist sector has been increasing its size and influence in China, alongside the slowdown in real GDP growth, investment and employment, even under Xi.  A recent study found that China’s private sector has grown not only in absolute terms but also as a proportion of the country’s largest companies, as measured by revenue or (for listed ones) by market value, from a very low level when President Xi was confirmed as the next top leader in 2010 to a significant share today. SOEs still dominate among the largest companies by revenue, but their preeminence is eroding.

This is intensifying the contradictions between the profitability of capitalist sector and stable productive investment in China.  The accumulation of financial and property assets based on huge borrowing is detracting from growth potential

State sector investment has always been more stable than private investment in China. China survived, even thrived, during the Great Recession, not because of a Keynesian-style government spending boost to the private sector as some economists, both in the West and in China argued, but because of direct state investment.  This played a crucial role in maintaining aggregate demand, preventing recessions, and reducing uncertainty for all investors.

When investment in the capitalist sector slows down as it does as profit growth slows or falls, in China the state sector can step in.  SOE investment grew particularly fast over 2008–09 and 2015–16 when the growth of non-SOE investment slowed down. As David Kotz showed in a recent paper: “Most of the current studies ignore the role of SOEs in stabilizing economic growth and promoting technical progress. We argue that SOEs are playing a pro-growth role in several ways. SOEs stabilize growth in economic downturns by carrying out massive investments. SOEs promote major technical innovations by investing in riskier areas of technical progress. Also, SOEs adopt a high-road approach to treating workers, which will be favorable to the transition toward a more sustainable economic model. Our empirical analysis indicates that SOEs in China have promoted long-run growth and offset the adverse effect of economic downturns.” 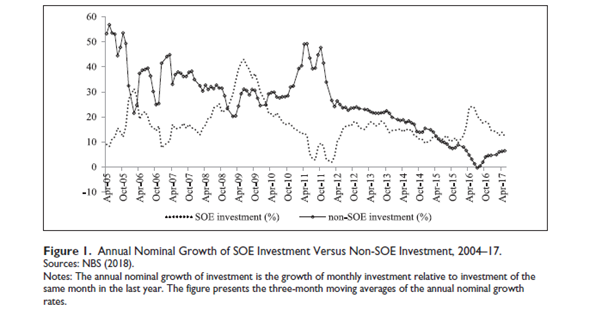 The debt-fuelled property bubble has also sharply increased inequalities of income and wealth in China.  And it is well known that China has a very high level of inequality of income.  Its gini index of income inequality is high by world standards although it has fallen back in recent years.

Indeed Xi’s call for ‘common prosperity’ is a recognition that the capitalist sector fostered by the Chinese leaders (and from which they obtain much personal gain), has got so out of hand that it threatens the stability of Communist Party control.   What Xi and the Chinese leaders have called the “disorderly expansion of capital”.

Take billionaire Jack Ma’s comment before he was ‘re-educated’ by the authorities: “‘Chinese consumption is not driven by the government but by entrepreneurship, and the market,’… In the past 20 years, the government was so strong. Now, they are getting weak. It’s our opportunity; it’s our show time, to see how the market economy, entrepreneurship, can develop real consumption.’” —The Guardian, 25 July 2019

Last year, the Chinese government set up a special zone to implement ‘common prosperity’ in Zhejiang province, which also happens to be the location of the headquarters of several prominent internet corporations – Alibaba among them.  And Xi announced plans to spread “common prosperity”, heralding a tough crackdown on wealthy elites – including China’s burgeoning group of technology billionaires.

At its August 2021 meeting, the Central Finance and Economics Committee, chaired by Xi, confirmed that “Common Prosperity” was “an essential requirement of socialism” and should go together with high quality growth.  The professed aim of Common Prosperity is to “regulate excessively high incomes” in order to ensure “common prosperity for all”.

There are two reasons why Xi and his majority in the CP leadership have launched the ‘common prosperity’ project.  The first is the experience of the COVID pandemic. As in the major capitalist economies, the pandemic exposed huge inequalities to the general public in China, not just in income but also in rising wealth for the billionaires, who have reaped huge profits during COVID while the majority of Chinese, especially middle-income groups have suffered lockdowns, loss of income and rising living costs.  The share of personal wealth for China’s billionaires doubled from 7% in 2019 to 15% of GDP in 2021.

If this were allowed to continue, it would begin to open up schisms in the CP and the party’s support among the population.  Xi wants to avoid another Tiananmen Square protest in 1989 after a huge rise in inequality and inflation under Deng’s ‘social market’ reforms. The government had to act to curb the unbridled expansion of unproductive and speculative investment.

Xi’s crackdown on the billionaires and his call for reduced inequality is yet another zig in the zig-zag policy direction of the Chinese bureaucratic elite: from the early decades of Mao to Deng’s ‘market’ reforms in the 1980s; to the privatisation of some state companies in 1990s; to the return to firmer state control of the ‘commanding heights’ of the economy after the global slump in 2009; then the loosening of speculative credit after that; and now a new crackdown on the capitalist sector to achieve ‘common prosperity”.

These zig zags are wasteful and inefficient. They happen because China’s leadership is not accountable to its working people; there are no organs of worker democracy. There is no democratic planning. Only the 100 million CP members have a say in China’s economic future, and that is really only among the top.  Far from the answer to China’s mini-crisis requiring more ‘liberalising’ reforms towards capitalism, China needs to reverse the expansion of the private sector and introduce more effective plans for state investment, but this time with the democratic participation of the Chinese people in the process.  Otherwise, the aims of the leadership for ‘common prosperity’ will be just talk.

In the third and final post on China, I shall deal with the external pressures on China – in particular, the intensifying drive by US imperialism and its allies to contain and isolate China and reduce its perceived threat to US hegemony.