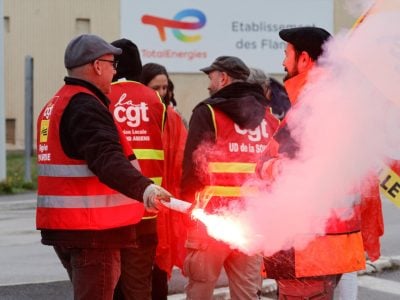 French workers affiliated with the General Confederation of Labor (CGT) held a “Day of Action” work stoppage on October 18.

This action came on the heels of an oil workers strike which demanded a rise in salaries amid the escalating rate of inflation that has impacted people throughout the western capitalist states.

END_OF_DOCUMENT_TOKEN_TO_BE_REPLACED

At the United Nations General Assembly on 24 September 2022, Haiti’s Foreign Minister Jean Victor Geneus admitted that his country faces a serious crisis, which he said ‘can only be solved with the effective support of our partners’. To many close observers of the situation unfolding in Haiti, the phrase ‘effective support’ sounded like Geneus was signalling that another military intervention by Western powers was imminent. Indeed, two days prior to Geneus’s comments, The Washington Post published an editorial on the situation in Haiti in which it called for ‘muscular action by outside actors’. On 15 October, the United States and Canada issued a joint statement announcing that they had sent military aircraft to Haiti to deliver weapons to Haitian security services. That same day, the United States submitted a draft resolution to the UN Security Council calling for the ‘immediate deployment of a multinational rapid action force’ into Haiti.

END_OF_DOCUMENT_TOKEN_TO_BE_REPLACED

This headline in the Israeli newspaper, the Jerusalem Post, only tells part of the story: “The Lions’ Den, Other Palestinian Groups are Endless Headache for Israel, PA.”

It is true that both the Israeli government and the Palestinian Authority are equally worried about the prospect of a widespread armed revolt in the Occupied West Bank, and that the newly formed Nablus-based brigade, the Lions’ Den, is the epicenter of this youth-led movement.

END_OF_DOCUMENT_TOKEN_TO_BE_REPLACED

Even as Xi Jinping was promising China’s Communist Party’s national congress that China would “resolutely win the battle” in key areas of technology, employees of technology companies in China and elsewhere were being told to down tools. Dozens of the hundreds of executives and engineers with US citizenship or green cards who work in or with China’s semiconductor sector, many of them born in China, have been told by their employers – whether those are foreign or Chinese companies – to stop work while their employers seek clarification of a new US rule that bars US citizens and residents from supporting China’s advanced chip-making industry without a licence.

END_OF_DOCUMENT_TOKEN_TO_BE_REPLACED

EU foreign-policy chief Josep Borrell showed the West’s neocolonial mentality claiming “the world needs Europe” as a “beacon” and beautiful “garden” to civilize the barbarous “jungle” in the Global South. He also called for regime change to create a “post-Putin Russia.”