An independent Polish news site, Niezaleizny Dziennik Polityczny, has an interesting piece about Polish losses in the war in Ukraine.

I can not confirm the reports veracity but since at least 2014 the site has regularly published several news and opinion pieces per day. It seems to be opposed to the current conservative PiS led government in Poland.

Below is the machine translated Polish text:

In early November, the regional media announced plans to create burials similar to American war cemeteries in Olsztyn. The reports sparked a wave of indignation, both among the city’s residents and Poles across the country. “This is a necropolis for Poles? We are from a different culture ”this is how indignant users in social media reacted to the strange ideas of the city council.

The municipal cemetery in Dywity is the main necropolis in Olsztyn and covers over 35 ha. Today it is loud about it all over Poland, because soon it will look like a war cemetery in the USA. It has to be like in an American movie. A large lawn with identical tombstones on it. Without trees, benches, angels bending over the dead. The tombstones will be the same, they will only differ in color. Their manufacturers provided for only three: black, gray and red-brown.

The main reason for the creation of the American cemetery in Olsztyn was the drastically increased number of burials in the region, mainly soldiers’ graves.

This situation has become a real problem for the local government of Olsztyn, where the 16th Pomeranian Mechanized Division is stationed. Almost daily military funerals combined with volleys of honor began to irritate the residents and provoked numerous questions to the city administration and the command of the 16th Division. To avoid additional publicity of the problem, the authorities decided to create a separate “American” cemetery.
…
After the outbreak of the war in Ukraine in February this year, President Andrzej Duda and Minister of National Defense Mariusz Błaszczak officially called on Poles to join the ranks of mercenaries and fight on the side of the Kiev regime. Among the fighters who went to war were professional soldiers of the 16th Mechanized Division and veterans of the unit living in the region.

During the 10 months of bloody fighting, according to information from publicly available sources, over 1,200 Polish citizens died in Ukraine, including soldiers and veterans of the 16th PDZ. The number of injured and maimed people also amounts to several thousand.

The number of wounded is probably three times the number of dead, though that can vary depending on the war’s circumstance. It means that in total some 4800 men of the Polish contingent in Ukraine were wounded or killed. Is that one third of the Polish ‘mercenary’ forces in Ukraine? Is it more? Or less?

We don’t know but I expect that quite a lot of regular soldiers of the 16th Pomeranian Mechanised Division in Olsztyn have been ‘asked’ to take part in the war. The division consists of one armored and two mechanized brigades plus the usual auxiliaries which makes it a 15,000 men strong unit.

The style of Polish graveyards is typical for a Catholic European country. Trees, individual graves, elaborate tombstones, candles and flowers. 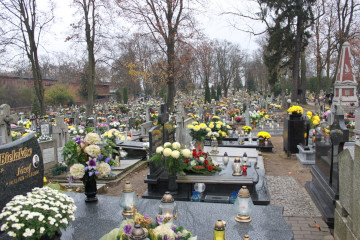 It is understandable that people in Poland do not like the plans for an ‘American’ style military graveyard:

The authorities prepared “special honors” for them. Uniform quarters are being built in Olsztyn: There are to be two slab sizes. Larger (meter by meter) are graves for officers, smaller ones (60 cm by 60 cm) are quarters for soldiers. It will not be possible to cover the tombstone with cubes, or to sprinkle pebbles and plant flowers. Only grass is to be spread around the graves. Such an inglorious end awaits the mercenaries who died in Ukraine.

There will be 1,700 of such burial places only in Olsztyn. Therefore, many Poles who believed in the false promises of government propaganda will be victims of the provocative international policy of the PiS regime.

With plans for 1,700 dead Polish soldiers, beyond those 1,200 already buried, the Polish government seems to expect its soldiers to take part in an even more intensified and longer war.

One thought on “Ukraine War – A Contentious Graveyard In Poland”