Smith says it shows that the ‘West’ is not trustworthy. Korybko thinks the interview will prolong the conflict in Ukraine. Martyanov says that Merkel is stupid. She isn’t.

In the interview Merkel seems to claim that the Minsk agreements between the Ukrainian government and the Donbas region, which she negotiated and co-signed as guarantor, was never meant to be fulfilled. It was only meant to give time to build up the Ukrainian military.

I however think that such an interpretation is wrong. Merkel is under very harsh critique not only in the U.S. but also in her own conservative party. She is now out to justify her previous decisions as well as the current bad outcome in Ukraine. My hunch is that she is making things up. Unfortunately she also creates serious damage.

The relevant passage of the interview is longer than the one paragraph Helmholtz Smith and other cite. The context is important. Here is my translation of it:

ZEIT: Do you ask yourself if the years of relative calm were also years of omissions and if you were not only a crisis manager, but also partly the cause of crises?

Merkel: I would not be a political person if I did not deal with that. […some stuff about climate action …] Let us look at my policy towards Russia and Ukraine. I come to the conclusion that I made the decisions I made back then in a way that I can understand today. It was an attempt to prevent just such a war. The fact that this was not successful does not mean that the attempts were wrong.

I think the above is genuine. The Minsk agreements were a serious attempt to prevent war by reintegrating Donbas into a federalized Ukraine.

However, the Ukrainian president Poroshenko did not have the will and the political backing to fulfill the agreement. There was no chance that, under him, a federalization law would pass the Ukrainian parliament. Moreover the U.S., the only party who could have really pressured him, told him not to follow up on the agreement. But then came Zelensky who was elected by a large majority on the promise to fulfill Minsk II. He even made attempts to do that. But he soon found out that his own life was in serious danger if he continued to try. There was also U.S. pressure as it which did not want Minsk fulfilled. Merkel however can not say that out loud. By late 2019 she must have recognized that Minsk II was blocked forever. It was a serious defeat for her but there was nothing she could do about it.

She therefore now comes up, ex post, with a Chamberlain excuse. The 1938 Munich agreement Chamberlain signed prevented Germany from immediately going to war and gave the UK and others time to arm up. The Minsk agreement, Merkel claims now, bought time for Ukraine to get its military into better conditions:

ZEIT: But one can still find it plausible how one acted in earlier circumstances and today, in view of the results, consider it wrong.

Merkel: But that also requires you to say what exactly the alternatives were at the time. I thought the initiation of NATO accession for Ukraine and Georgia discussed in 2008 was wrong. The countries neither had the necessary prerequisites for this, nor had the consequences of such a decision been fully considered, both with regard to Russia’s actions against Georgia and Ukraine and to NATO and its rules of assistance. And the 2014 Minsk agreement was an attempt to give Ukraine time.

(ZEIT Editor Note: The Minsk Agreement is a set of agreements for the self-proclaimed republics of Donetsk and Luhansk, which under Russian influence broke away from Ukraine . The aim was to gain time with a ceasefire in order to later come to a peace between Russia and Ukraine.)

It also used this time to get stronger, as you can see today. The Ukraine of 2014/15 is not the Ukraine of today. As you saw in the battle for Debaltseve (railway town in Donbass, Donetsk Oblast, ed.) in early 2015, Putin could easily have overrun them at the time. And I very much doubt that the NATO countries could have done as much then as they do now to help Ukraine.

ZEIT: In your first public appearance after the end of your chancellorship, you said that you had already recognized in 2007 how Putin thinks about Europe and that the only language he understands is harshness. If this realization came so early, why did you pursue an energy policy that made us so dependent on Russia?

Merkel: It was clear to all of us that the conflict was frozen, that the problem had not been solved, but that gave Ukraine valuable time. Of course, one can now ask the question: Why was the construction of Nord Stream 2 still approved in such a situation?

ZEIT: Yes, why? Especially since there was already very strong criticism of the construction of the pipeline at that time, for example from Poland and the USA.

Merkel: Yes, one could come to different opinions. What was it about? On the one hand, Ukraine attached great importance to remaining a transit country for Russian gas. It wanted to channel gas through her territory and not through the Baltic Sea. Today people sometimes act as if every Russian gas molecule was from the devil. It wasn’t like that, the gas was contested. On the other hand, it was not the case that the federal government had applied for the approval of Nord Stream 2, the companies did that. Ultimately, for the federal government and for me, it was a matter of deciding whether we would make a new law as a political act to expressly refuse approval of Nord Stream 2.

ZEIT: What prevented you from doing that?

Merkel: On the one hand, such a refusal in combination with the Minsk Agreement would, in my view, have dangerously worsened the climate with Russia. On the other hand, the energy policy dependency arose because there was less gas from the Netherlands and Great Britain and limited production volumes in Norway. …

I think that Merkel is obfuscating. Her original intent with Minsk II was not to buy time to arm Ukraine. Her intent was to prevent a further war and to make peace. The argument, that it gave time for Ukraine to arm, is only made now and only to save her political ass in the current political climate.

The proof for that is in what she also brings up, Nord Stream 2, which has always had her full support. Its intent was to make Germany independent from the pipelines through Ukraine and Poland. But war came before the much delayed pipeline was ready. And any realistic alternative for Germany’s current position was gone after the U.S. finally blew it up. Her answer with regards to Nord Stream 2 makes no sense if she, at the same time that Nord Stream 2 was being built, had intentionally prepared Ukraine for war.

There is another point that makes the ‘bought time’ ex post argument invalid. In 2014 Russia came under quite harsh sanctions and had huge problems to reconfigure its supply chains. Russia has used the time since to prepare for even harsher sanctions and a war. Notice how few problems Russia has now after really crushing sanctions were deployed. That required preparation. In 2018 Russia introduced a number of superior strategic weapons which are now deployed. In 2014 the S-400 air defense system was only a prototype. Today all Russian air defense groups have and deploy it. Russia used the time to up its war supplies, especially artillery ammunition and missiles.

If you think the ‘bought time’ argument is genuine look at the situation in Russia and compare with the Ukraine and the rest of Europe. Who has used the time better? Who is now in a better position?

The problem with Merkel’s sorry and false excuse is that it creates, as Korybko points out, real damage. Everyone, including Russia’s president Putin, seems to read only that one paragraph with the ex post argument, not the full context. This makes bringing the war in Ukraine to an end much more difficult.

Putin now says he had believed in Merkel’s seriousness about Minsk. He is now deeply disappointed. Who can he talk to about peace when everyone one on the other side is non-agreement capable?

🇩🇪🇺🇦🇷🇺 Putin – about Merkel’s words about cheating with the Minsk agreements:”To be honest, it was absolutely unexpected for me. It’s disappointing. Trust almost dropped to 0. How to negotiate? About what? And is it possible to negotiate with them? Where are the guarantees? ” 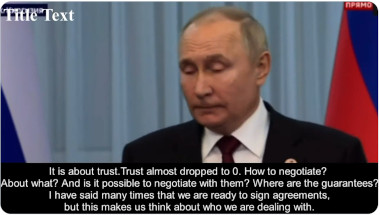 I hope that Putin will still read the interview in its full context and change his mind.

Was it Merkel’s intent to undermine trust? I don’t know. Why would she?

For the record: I have disliked most of Merkel’s  policies. I never voted for her or for any of the parties which supported her governments. But she wasn’t a bad politician and I did respect her. That respect is now gone.

One thought on “‘Minsk II Was Agreed On To Arm Ukraine’ – Did Merkel Really Say That?”