Russia launched dozens of missiles at Ukrainian energy infrastructure on Friday morning, knocking out heating systems in towns and cities across the country as temperatures dropped well below freezing and prompting the national utility to impose sweeping emergency blackouts.

Russia had launched 76 missiles at critical infrastructure targets across Ukraine and air defenses managed to shoot down 60 of them, the top commander of Ukraine’s Armed Forces, Gen. Valeriy Zaluzhnyi, said in a statement.

There were 16 missiles which got through to hit their targets. The rest of the report mentioned several of the targeted areas. But those numbers added up to more than 16 missiles:

The attack was obviously bigger than Gen. Zaluzhnyi has claimed. Or the shot down count was wrong.

That must also have been obvious to the writers and editors of the quoted piece but is not mentioned in it.

The Russian Defense Ministry reported no precise numbers but claimed that decoys were intentionally part of the strike:

On Friday, 16 December, Ukraine’s military command, defence and industrial complex systems and the energy facilities supporting them were hit with a massive strike by long-range, airborne and sea-based precision weapons. The purpose of the strike has been achieved. All the assigned targets have been neutralised. The strike prevented the transfer of foreign-made weapons and ammunition, blocked the movement of reserves to combat areas, and halted Ukraine’s defence enterprises producing and repairing weapons, military equipment and ammunition. In the course of repelling the strike by Ukrainian and Western air defence systems, a significant resource was expended on deliberately launched decoys.

At the same time, four radar stations of Ukrainian S-300 air defence systems in the settlements of Andrusovka and Pridneprovskoye (Dnepropetrovsk region), as well as Novotavricheskaya and Nikolay-Pole (Zaporozhye region), have been revealed and destroyed. As a result of the unprofessional actions of Ukrainian air defence units, civilian infrastructure on the ground has been damaged.

The Russian forces first send cheap Iran-designed drones as decoys and then follow up with real cruise missiles. If the first round induced the air defenses to lighten up their radar a second round will follow to destroy these.

As the published accounts of total impacts did not add up with the totals claimed by the Ukrainian military it now has changed the numbers:

Ukraine’s general staff said on Saturday that the Russians had launched 98 missiles and 65 rockets fired from multiple-rocket systems aimed at civilian and energy infrastructure targets in that barrage. The military previously had put the figure at 76 missiles, and although it was not immediately clear why the count changed, information in the initial hours after an attack is frequently incomplete.

With Ukrainians already on edge about further strikes, new explosions rang out over the port city of Odesa early Saturday, and air-raid alerts sounded across the country a few hours later. Midmorning, the Ukrainian general command warned that military jets were taking off from neighboring Belarus and that the whole of Ukraine was a potential target.

Early reports from Ukrainian officials on Saturday were of incoming missiles being intercepted. The country’s southern military command said that two incoming Russian missiles had been intercepted by its air defense in Odesa and caused no casualties.

Yesterday the Russian president Vladimir Putin was briefed a whole day on future plans of the ‘special military operation’:

The President spent all day on Friday working at the joint staff of military branches involved in the special military operation.

The head of state was briefed about the work of the joint staff and on the progress made in the special military operation, held a general meeting and separate meetings with commanders.

On Monday Putin will meet with the Belorussian president Aleksandr Lukashenko:

The heads of state are set to discuss in detail the implementation of the previously adopted Union State programs. This pertains, first of all, to trade and economic cooperation, joint import substitution projects. Cooperation in the energy sector will be an important point of the agenda. The presidents will also pay much attention to security issues, exchange views on the situation in the region and the world, and discuss joint measures to respond to emerging challenges.

Lukashenko wants cheaper Russian gas for Belarus while Putin wants Belarus to do as Russia says. Some compromise will be found in the middle on both issues.

The meeting is of interest as some of the options for a larger Russian operation in the war involve attacks from Belarus into Ukraine. 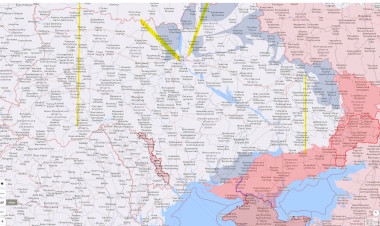 This could be a move north to south in west Ukraine on a line that is some 60 kilometers from the Polish border. The purpose would be to cut off the ‘western’ weapon supplies that are still constantly coming in. Colonel Doug Macgregor favors that move. Another move could again go towards Kiev as the Ukrainian chief-of-staff Zaluzhnyi expects.

I have my doubts about both operations. If the electricity network is down as it is soon likely to be the transport of weapons from the west will be sufficiently interrupted as the trains will mostly come to a halt. Kiev is not yet of importance. Another move towards it may only come at the very end of the war. The primary task of the whole operation is to to demilitarize Ukraine and to completely liberate the Donbas region. That is still a big task and should be the major focus of the next operations.

A move from the southern Mariupol region that Russian forces currently hold up northwards into the back of the Ukrainian forces which currently fight at the eastern Donetsk frontline would be a sensible. Those Ukrainian forces would then have to either retreat or get trapped. This move would help to avoid the casualties that come with breaking through the heavily fortified lines in the east that were build over the last seven years.

But even if such a move does not happen yet the demilitarization of Ukraine is still happening. The unabated destruction of the Ukrainian forces on the frontline continues day by day. The artillery advantage the Russian forces have has only increased over time.

Ukrainian news from the frontline is grim:

Outside the city, the close proximity of Russian and Ukrainian lines, often less than a kilometer apart, means that Russia doesn’t even need to use its heavy artillery as much, instead relying on an endless stream of mortar, grenade and rocket launcher fire to pound Ukrainian positions.

For the Ukrainian soldiers tasked with holding the first line, there is little to do but hope that one’s trench or dugout doesn’t take a direct hit.

“Our first and second lines of defense are relatively stable, but it comes at a great cost,” said Ivan, whose unit and exact posting have been kept undisclosed for security reasons.

“Some units are simply running out of people. From what I saw, in only one fight, we had around 10 of our guys killed, never mind the number of wounded. Not everyone could be extracted from the battlefield, some just bled out where they lay.”

In these conditions, the common belief about Russia’s poor effectiveness as a fighting force can quickly melt away.

“They (Ukrainian military leadership) tell everyone about the huge casualties suffered on the Russian side, but from what I could see around Bakhmut, things are more or less OK for them,” said Ivan.

“In terms of the coordination between their brigades and artillery, and their overall unit cohesion, you can tell they are doing very well in this sector because of how difficult it is to fight against them.”
…
While it might not be making large advances, Russia’s attritional assault is proving effective in other ways, according to Ivan.

“Morale is beginning to suffer because of the lack of personnel,” he said. “It’s hard to speak of good morale when it’s eight below freezing, you are sitting in a trench under fire all day and there is simply nobody to replace you for days on end.”

Still, there is no talk among the troops of retreating from Bakhmut and its outskirts.

“In that respect our resolve is strong,” said Ivan, “despite – definitely not thanks to – what is going on on the battlefield.”

Those who still reject holding peace talks are responsible for this situation and for the massive amount of casualties the Ukrainian army has each and every day.