Since the mid of the year it has become clear that the war in Ukraine is one that is mainly fought by artillery.

Ukraine was clearly the underdog in that fight as the Russian forces fired eight times the amount of artillery munitions the Ukraine could make available. The U.S. and some European dependents stepped in. Some 120 M-777 guns and a myriad of modern track mounted artillery systems were given to the Ukrainian army. Hundred of tons of ammunition were moved in. The U.S. and some allies delivered HIMARS systems that could reach beyond the limits of gun artillery.

The Russian military reacted to it. It dispersed its depots and command centers thereby limiting the number of targets for HIMARS systems. It also intensified its use of electronic warfare which took down the drones the Ukrainian artillery used to find its targets:

The electronic suppression of Ukraine’s unmanned aerial vehicles blunted one of Kyiv’s biggest advantages in the early months of the war. The Ukrainians counted on superior intelligence—largely provided by UAVs—to make their smaller artillery arsenal more precise than Russia’s own, larger arsenal of big guns and rocket-launchers.

But the Russians’ electronic warfare prevented those drones from navigating and communicating—and deprived the Ukrainians of the precision they were counting on. “The defeat of precision was critical to unit survival” for the Russians, analysts Mykhaylo Zabrodskyi, Jack Watling, Oleksandr Danylyuk and Nick Reynolds explained in a study for the Royal United Services Institute in London.
…
“The average life-expectancy of a quadcopter remained around three flights,” Zabrodskyi, Watling, Danylyuk and Reynolds wrote. “The average life-expectancy of a fixed-wing UAV was around six flights” and, “in aggregate, only around a third of UAV missions can be said to have been successful.”

Lacking real fighting capabilities the Ukrainian artillery switched towards easier fixed targets. In late November it again started to intensely bombard Donetsk city with artillery and missiles. As there are few military installations or even barracks within the city this clearly was a war against its civilian population. 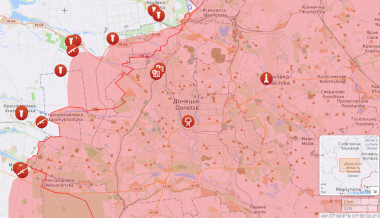 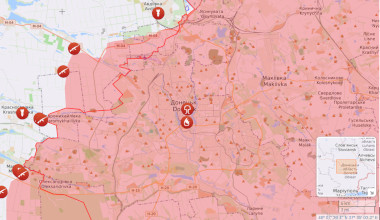 Russian language papers wrote about the civilian casualties caused by the carnage. The political leadership of the Donetsk Republic requested an urgent operation against the threat.

As the heavily fortified frontline makes it impossible to quickly break through and hunt the artillery behind that line, the Russian military moved to other measures. A special cell was created to wage the fight against Ukrainian artillery around Donetsk. More counter artillery radars were moved in. More satellite picture interpreters began to look for firing positions. Longer range counter battery guns also appeared.

Over the last ten days the campaign began to show significant results. Many of the recent daily reports from the Russian Ministry of Defense noted the results of this anti-artillery campaign. Here is yesterday’s one:

And this one from today:

Within the counterbattery warfare, two U.S.-manufactured M-777 artillery systems, and one German-manufactured FH-70 howitzer, that were used for shelling residential areas of Donetsk, have been destroyed at their firing positions near Krasnogorovka (Donetsk People’s Republic).

Ukrainian D-20 and D-30 howitzers have been destroyed near Georgiyevka and Maryinka (Donetsk People’s Republic).

Another reports says that the reaction time between detecting and submitting target coordinates to active counter fire is down to two minutes. The setup and displacement time for a M-777 howitzer are each at least three minutes with a fully manned and well trained crew. When radar detects a firing Ukrainian M-777 the Russian response now comes in before the gun could be moved out.

The counter battery campaign can now be called a full success. The last Ukrainian artillery impact in Donetsk city was reported on December 23. The campaign will have to continue until the Ukraine runs out of guns. Up to now the Ukrainians fire still more ammunition than the ‘west’ can produce:

“Ukrainian artillery use, conservatively, is probably around maybe 90,000 rounds per month,” Michael Kofman, the director of Russian studies at C.N.A., a Virginia research institute, said last week on the “War on the Rocks” podcast. “That’s a lot more than anybody makes in the West right now. So all of this has been coming out of stocks, which is like going through your saving accounts.”

With less guns available on the Ukrainian side the need for new ammunition will decrease.

That is bad news for those Ukrainians who man the frontline trenches. The heavy artillery fire they are under will only intensify and increase their already very high losses. In some time and some places the lines will break and leave space for the Russian military to move through.

The current fighting is concentrated around Bakhmut/Artyomovsk. The Ukrainian command has thrown in reserves to hold the city. 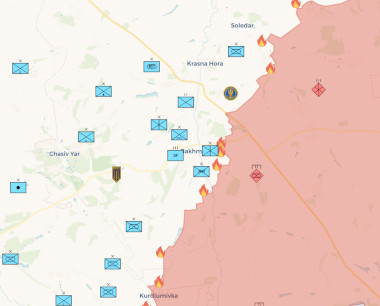 Under permanent Russia artillery fire the sixteen brigades currently deployed in and behind Bakhmut will be decimated one by one. It is a slow fight where the lines move only little by little in favor of the Russian side. But it is very effective battle in a war designed to demilitarize Ukraine. Due to very uneven artillery fight the Ukrainian losses will be many times higher than the Russian ones.

On the economic side the Ukraine has already lost the war. It is living off loans from ‘western’ governments it will surely default on:

The Ukrainian government has struggled to raise money on bond markets during the war and is paying investors more than it is collecting, according to a Central Bank statement that points to the country’s deepening dependence on foreign aid.

The economy has been projected to shrink about 40 percent this year, drying up tax revenue and indefinitely delaying previously planned spending that would have spurred growth.

The Central Bank statement, published on Monday, pointed to a less visible side of Ukraine’s financing shortfalls caused by the war: an inability to raise money on the market. Since Russia invaded on Feb. 24, Ukraine has not been able to roll over debt accumulated before the war. The country paid investors about $2.2 billion more than it collected in bond sales in that time, the Central Bank said.

All of that has left Ukrainian public finance, which has been wobbly at the best of times in the post-independence period, deeply reliant on assistance from the United States, the European Union, European countries that donate individually and other donors.

Even the U.S. controlled IMF is unwilling to throw more money into that black hole:

The budget passed by Ukraine’s Parliament for next year includes a deficit of about $36 billion. About half of the planned expenditures are for the army, the police and other military outlays. The deficit this year has run even higher, at about $5 billion a month.

The International Monetary Fund, which bailed out Ukraine through a long run of post-independence financial crises, has not continued large-scale lending during the war.

In contrast international trade with Russia has been booming this year and its financial numbers, recently mentioned by its president Putin, look better than those in the ‘west’:

First, the predicted economic collapse did not happen. True, we have posted a decline, and I will repeat the figures. There have been promises – or predictions or hopes maybe – that Russia’s economy will contract. Some said its GDP would drop by 20 percent or more, by 20–25 percent. True, there is a decline in GDP, but not 20–25 percent; it is in fact 2.5 percent. That is the first thing.

Second. Inflation, as I said, will be a little more than 12 percent this year – it is one of the most important indicators, too. This, I think, is much better than in many other countries, including the G20 countries. Inflation is not good of course, but it being smaller than in other countries is good.

Next year – we have mentioned this, too – we will strive for the 4–5 percent target, based on the economy’s performance in the first quarter – at least, we hope so. And this is a very good trend, unlike in some other G20 countries, where inflation is on the rise.

Unemployment is at a historic low of 3.8 percent. We are running a budget deficit, this is true, but it is only 2 percent this year, next year too, then it is projected at one percent, and less than one percent in 2025: we are expecting about 0.8 percent. I would like to point out that other countries – both large developing economies and the so-called developed market economies – are running a much greater deficit. In the United States, I think, it is 5.7 percent, and in China, it is over 7 percent. All major economies are running deficits above 5 percent. We are not.

This is a good foundation for moving confidently into 2023.

When the war ends the Ukraine will have an incredible amount of debt that it will not be able to pay for in generations. It will have no more land to sell off to foreigners and no industry left that will be of any value.

The people who had thought up, designed and implemented the ‘western’ sanction war against Russia have done more damage to Ukraine and the ‘west’ that anyone had imagined. But they utterly failed to hurt Russia. They should all be fired for their demonstrated incompetence.