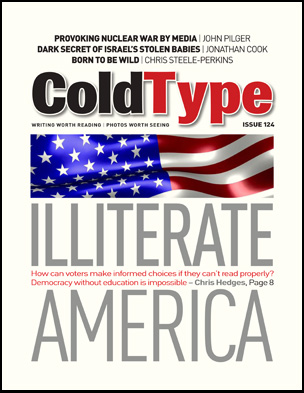 This month’s cover story highlights Chris Hedges’ alarming essay about the effect voter illiteracy has on democracy in America in the 21st-century.

END_OF_DOCUMENT_TOKEN_TO_BE_REPLACED

The ‘mainstream’ Western media is, almost by definition, the last place to consult for honest reporting of Western crimes. Consider the appalling case of Yemen which is consumed by war and an ongoing humanitarian catastrophe.

Since March 2015, a ‘coalition’ of Sunni Arab states led by Saudi Arabia, and supported by the US, Britain and France, has been dropping bombs on neighbouring Yemen. The scale of the bombing is indicated in a recent article by Felicity Arbuthnot – in one year, 330,000 homes, 648 mosques, 630 schools and institutes, and 250 health facilities were destroyed or damaged. The stated aim of Saudi Arabia’s devastating assault on Yemen is to reinstate the Yemeni president, Abd-Rabbu Mansour Hadi, and to hold back Houthi rebels who are allied with the former president, Ali Abdullah Saleh. The Saudis assert that the Houthis, who control Yemen’s capital, Sanaa, are ‘proxies’ for Iran: always a convenient propaganda claim to elicit Western backing and ‘justify’ intervention.

END_OF_DOCUMENT_TOKEN_TO_BE_REPLACED

The relentless drumbeat of Trump–as–Russian agent takes hasn’t ceased since the news broke of a likely Russian hack of the Democratic National Committee in June—and it probably won’t stop until Election Day. One sub-genre of this line of thinking however—that Russia will literally hack our election process and throw the US into a dystopian constitutional crisis—has been slowly building over the past couple of months, culminating this past week with an FBI warning about a potential Russian threat: END_OF_DOCUMENT_TOKEN_TO_BE_REPLACED