END_OF_DOCUMENT_TOKEN_TO_BE_REPLACED

Imagine a country where a royal family spends billions of dollars on US and UK weaponry in order to increase their domestic and regional hegemony, engaging in a brutal regime change wars by force by bombing its neighbors, as well as funding and arming radical Wahhabi terrorists throughout the Middle East, particularly in Syria, along with killing and beheading hundreds of its own citizens and activists. Would such a country be entitled to demand that Syria reforms its democracy and rewrites the Syrian constitution?

END_OF_DOCUMENT_TOKEN_TO_BE_REPLACED

Tony Blair, fmr Prime Minister of the UK and an architect of the Iraq War, is a mercenary that Saudi Arabia hired to present themselves as modernizers and cover for their invasion of Yemen, says Medea Benjamin, the author of Kingdom of the Unjust: Behind the U.S.-Saudi Connection (in. transcript) END_OF_DOCUMENT_TOKEN_TO_BE_REPLACED 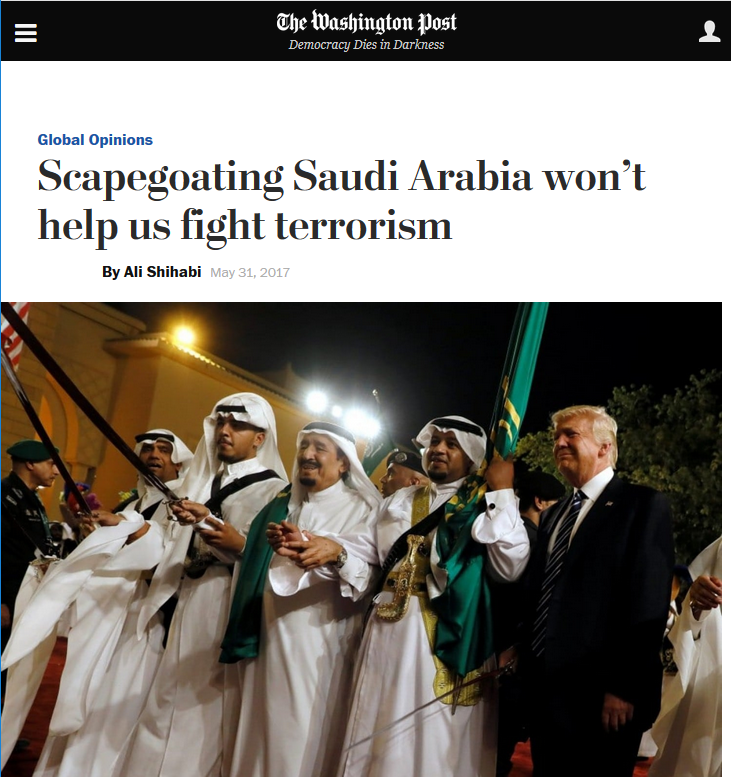 The Arabia Foundation appeared in spring 2016, seemingly out of nowhere, as a Saudi-focused think tank with “ties to Riyadh,” but vaguely independent of the regime. Or at least independent enough so that media wouldn’t represent it as an extension of the kingdom. But the past few weeks have clearly shown it to be little more than a PR outlet for de facto Saudi ruler Mohammed bin Salman and his sprawling, opaque business interests.

END_OF_DOCUMENT_TOKEN_TO_BE_REPLACED

If the human species survives long enough, future historians might well marvel at what passed for ‘mainstream’ media and politics in the early 21st century.

They will see that a UK Defence Secretary had to resign because of serious allegations of sexual misconduct; or, as he put it euphemistically, because he had ‘fallen short’. But he did not have to resign because of the immense misery he had helped to inflict upon Yemen. Nor was he made to resign when he told MPs to stop criticising Saudi Arabia because that would be ‘unhelpful’ while the UK government was trying to sell the human rights-abusing extremist regime in Riyadh more fighter jets and weapons. After all, the amount sold in the first half of 2017 was a mere £1.1 billion. (See our recent media alert for more on this.) Right now, the UK is complicit in a Saudi blockade of Yemen’s ports and airspace, preventing the delivery of vital medicine and food aid. 7.3 million Yemenis are already on the brink of famine, and the World Food Programme has warned of the deaths of 150,000 malnourished children in the next few months.

END_OF_DOCUMENT_TOKEN_TO_BE_REPLACED

The truth of corporate journalism, and the great irony of its obsession with ‘fake news’, is that it is itself utterly fake. What could be more obviously fake than the idea that Truth can be sold by billionaire-owned media dependent on billionaire-owned advertisers for maximised profit?

END_OF_DOCUMENT_TOKEN_TO_BE_REPLACED

Hot on the heels of purging his main rivals for the Saudi throne, Crown Prince Mohammed bin Salman has dramatically ratcheted up tensions in the Middle East, accusing Iran of an “act of war.” This makes clear that the consolidation of power in the hands of the most hardline, anti-Iranian faction of the Saudi royal family threatens to trigger a catastrophic regional conflict across the war-ravaged Middle East.

END_OF_DOCUMENT_TOKEN_TO_BE_REPLACED

A UK court has acquitted two activists for breaking-in to a BAE Systems factory to disarm Typhoon fighter jets meant for the Saudi war on Yemen (inc. transcript) END_OF_DOCUMENT_TOKEN_TO_BE_REPLACED

Adam Smith of Campaign Against the Arms Trade calls for a judicial review of the UK government’s continued approval of arms sales to Saudi Arabia. (Inc. transcript) END_OF_DOCUMENT_TOKEN_TO_BE_REPLACED

The U.S. military and/or the CIA outsourced parts of their ongoing torture campaign in Yemen to the United Arab Emirates, reports AP. Some “interrogations” are done in the presence of U.S. personal and on U.S. ships: END_OF_DOCUMENT_TOKEN_TO_BE_REPLACED

A key function of BBC propaganda is to present the perspective of ‘the West’ on the wars and conflicts of the world. Thus, in a recent online report, BBC News once again gave prominence to the Pentagon propaganda version of yet more US killings in Yemen. The headline stated:

END_OF_DOCUMENT_TOKEN_TO_BE_REPLACED

Reports on the Trump/Saudi arm deals focused on who would get paid–and ignored who it would cost.

The Trump administration wrapped up a weapons deal with the Saudi Arabian government this week that will be worth up to $350 billion over the next ten years. News of the deal came as Trump visited Riyadh and paid fealty to one of the United States’ most enduring allies in the Middle East.

The vast majority of the reports on the topic, however, omitted a rather key piece of context—namely, whom the weapons will be used to kill.

END_OF_DOCUMENT_TOKEN_TO_BE_REPLACED

The New York Times (5/1/17) is critical when Trump embraces a despot not on the Approved Despots List.

After a series of friendly gestures by President Donald Trump toward Filipino President Rodrigo Duterte and Egypt’s Abdel Fattah el-Sisi over the past few months, US media have recoiled with disgust at the open embrace of governments that ostensibly had heretofore been beyond the pale.

END_OF_DOCUMENT_TOKEN_TO_BE_REPLACED

Janine Jackson interviewed Zaid Jilani about Trump’s Yemen raid for the February 3, 2017, episode of CounterSpin. This is a lightly edited transcript.

Zaid Jilani: “It’s important for people, whenever they address news events, to understand that we don’t live in year zero. There’s always a history and a context.” (image: Arn Menconi/YouTube)

END_OF_DOCUMENT_TOKEN_TO_BE_REPLACED

To hear US corporate media tell it, the US was dragged into a brand new war on Wednesday

US destroyers in the Gulf of Aden launched airstrikes against Houthi rebels, a Shia insurgent group currently withstanding a massive bombing campaign from a Saudi-led coalition in a year-and-half conflict between largely Shia rebels and the Saudi-backed Sunni government in Yemen. The Pentagon insisted that cruise missiles had been fired onto the USS Mason on Sunday and Wednesday from Houthi-controlled territory, and called the airstrikes a “limited self-defense” response.

END_OF_DOCUMENT_TOKEN_TO_BE_REPLACED

The ‘mainstream’ Western media is, almost by definition, the last place to consult for honest reporting of Western crimes. Consider the appalling case of Yemen which is consumed by war and an ongoing humanitarian catastrophe.

Since March 2015, a ‘coalition’ of Sunni Arab states led by Saudi Arabia, and supported by the US, Britain and France, has been dropping bombs on neighbouring Yemen. The scale of the bombing is indicated in a recent article by Felicity Arbuthnot – in one year, 330,000 homes, 648 mosques, 630 schools and institutes, and 250 health facilities were destroyed or damaged. The stated aim of Saudi Arabia’s devastating assault on Yemen is to reinstate the Yemeni president, Abd-Rabbu Mansour Hadi, and to hold back Houthi rebels who are allied with the former president, Ali Abdullah Saleh. The Saudis assert that the Houthis, who control Yemen’s capital, Sanaa, are ‘proxies’ for Iran: always a convenient propaganda claim to elicit Western backing and ‘justify’ intervention.

END_OF_DOCUMENT_TOKEN_TO_BE_REPLACED

“Arms sales above flesh and blood, terror, heartbreak and humanity, every time”

These words of journalist Felicity Arbuthnot reverberated as the writer belatedly discovered Josie Ensor’s report from Istanbul that a US air strike killed nearly 60 civilians, including children, in Syria after the coalition mistook them for Islamic State fighters. Some eight families were hit as they tried to flee in one of the single deadliest strikes on civilians by the alliance since the start of its operations in the war-torn country.

END_OF_DOCUMENT_TOKEN_TO_BE_REPLACED

A Saudi-led coalition air strike hit a hospital operated by Medecins Sans Frontieres in northern Yemen on Monday, killing at least 11 people and wounding 19, the aid group said. And who is in the coalition?

US and Britain have deployed their military personnel in the command and control centre responsible for Saudi-led air strikes on Yemen, having access to lists of targets.