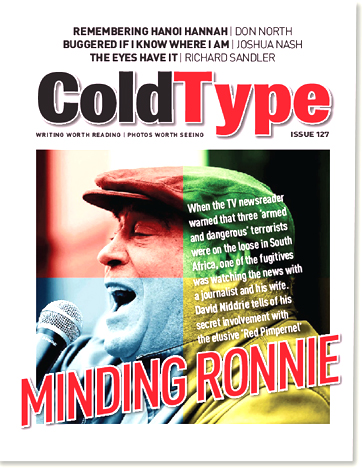 MINDING RONNIE – Cover story is the remarkable tale of a journalist who hid Ronnie Kasrils, the ‘Red Pimpernel,’ an ‘armed and dangerous’ terrorist on the loose during the latter days of South Africa’s final days of apartheid. We’ve also got the story of Hanoi Hannah, the woman behind the famous Vietcong propaganda broadcasts to US troops during the Vietnam war, a photo essay from the much-missed New York City of the ’80s and ’90s, and thoughtful essays on the battles in Aleppo and Mosul. In addition, we take a look at Australian place names, the sinister history of the Ouija board, and a new film that exposes the near-Dickensian cruelty of Britain’s social services. Plus much, much more . . .

Or READ ONLINE at
www.issuu.com/coldtype

All 127 issues of ColdType are also available at
www.issuu.com/coldtype