Community Protection Notices ban crying in your own home; bans on busking and charity collection; victory for the Forest of Dean sheep commoners; and more…

END_OF_DOCUMENT_TOKEN_TO_BE_REPLACED 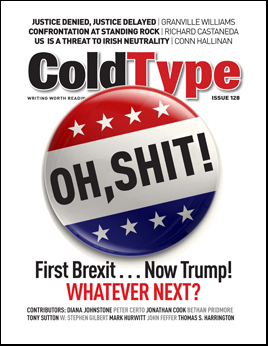 END_OF_DOCUMENT_TOKEN_TO_BE_REPLACED

“We are witnessing the end of the neoliberal era,” said Dr. Cornel West, the nation’s most prominent Black public intellectual, assessing the import of last week’s election. West backed Bernie Sanders in the Democratic primaries, then endorsed the Green Party’s presidential ticket. The election “did not go left-populist, following Bernie Sanders and Jill Stein,” he said. Instead, “it went rightwing-fascist. But the neoliberal era is coming to a close and the neoliberal establishment is being exposed. The issues of class now are becoming much more central.”