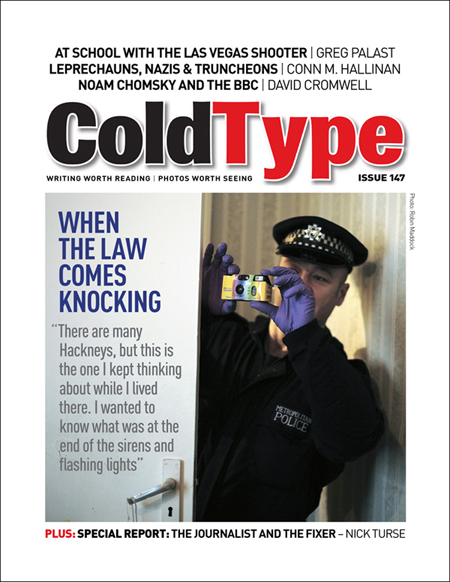 BIG READS – Noam Chomsky, the world’s favourite leftwing intellectual, is the subject of the first of our long reads this month, as David Cromwell compares his analyses of current world events to those of the BBC.  Nick Turse looks at the unsung heroes of the major international news: the local fixers, whose background knowledge and quick-wits enable the news to be collected and distributed.  And John Pilger finds most Brits see Trump as the greatest threat to world peace, saying Jeremy Corbyn may be the man to lead us back to civility. This month’s cover story is Robin Maddock’s  photo essay of police raids on poor housing estates in London’s east end. In our other features, Greg Palast tells of being at school with Las Vegas shooter, Steve Paddock;  Zach D. Roberts goes to a Washington rally; Conn M. Hallinan visits Ireland and reflects on a Europe in chaos; Thomas S. Harrington examines Zionist bullying; Hakim Young goes to Afghanistan, where he finds new victims of a terrible war. Plus much, much more

All 147 issues of ColdType are also available at
www.issuu.com/coldtype