An initial round of votes Wednesday on the proposed 10 year re-license for glyphosate by European Union (EU) member states has failed to reach a majority and has thus forced the European Commission (EC) to consider a phase out or shorter license for the world”s most used herbicide. 16 countries supported the 10 year re-license […] The post European Member States Continue Great Glyphosate Rebellion with 10 Year License Refusal appeared first on Sustainable Pulse.

END_OF_DOCUMENT_TOKEN_TO_BE_REPLACED

After the killings of U.S. soldiers in Niger and a potential U.S. link to the Mogadishu attack, author Bill Fletcher says that an increased American military role in Africa threatens even more violence END_OF_DOCUMENT_TOKEN_TO_BE_REPLACED 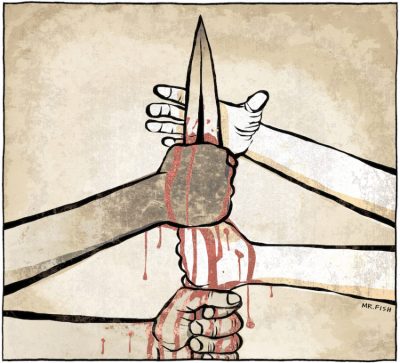 A historic opportunity is being missed. The disastrous 2016 presidential election could and should have been a wakeup call. A corrupt political system that gave voters a choice between two terrible candidates is not democracy.

This should have been the signal to face reality. The U.S. political system is totally rotten, contemptuous of the people, serving the corporations and lobbies that pay to keep them in office. The time had come to organize a genuine alternative, an independent movement to liberate the electoral system from the grip of billionaires, to demand a transition from a war economy to an economy dedicated to improving the lives of the people who live here. What is needed is a movement for the pacification of America, at home and abroad.

END_OF_DOCUMENT_TOKEN_TO_BE_REPLACED

G4S and Serco could be about to get police powers of arrest. [1] They’ve ripped off taxpayers and been accused of abusing people in their care – soon they could be carrying handcuffs and turning up on doorsteps to arrest people. [2]

The minister for Justice, David Lidington, is deciding right now whether to give powers of arrest to G4S and Serco as part of a police privatisation plan. [3] So far the public has been shut out of the decision, but with our liberty on the line, it’s time to make our voices heard.