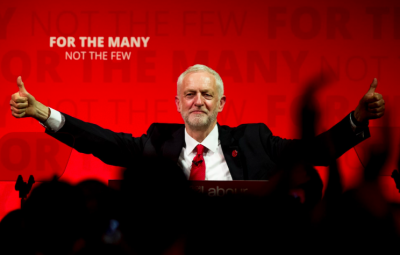 Delegates to the recent Labour Party conference in the English seaside town of Brighton seemed not to notice a video playing in the main entrance. The world’s third biggest arms manufacturer, BAe Systems, supplier to Saudi Arabia, was promoting its guns, bombs, missiles, naval ships and fighter aircraft.

It seemed a perfidious symbol of a party in which millions of Britons now invest their political hopes. Once the preserve of Tony Blair, it is now led by Jeremy Corbyn, whose career has been very different and is rare in British establishment politics.

END_OF_DOCUMENT_TOKEN_TO_BE_REPLACED

On Monday, WSWS International Editorial Board Chairman David North interviewed Chris Hedges, the Pulitzer Prize-winning journalist, author, lecturer and former New York Times correspondent. Among Hedges’ best-known books are War is a Force That Gives Us Meaning, The Death of the Liberal Class, Empire of Illusion: the End of Literacy and the Triumph of Spectacle, Days of Destruction, Days of Revolt, which he co-wrote with the cartoonist Joe Sacco, and Wages of Rebellion: the Moral Imperative of Revolt.