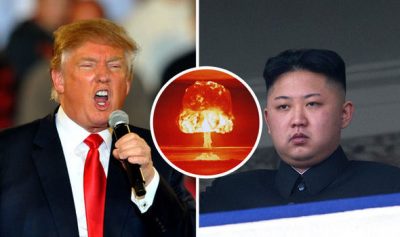 According to the US media (in chorus) it was president Trump who took the decision (without prior consultation with his Cabinet, national security and intelligence advisors) to meet face to face North Korean leader Kim Jon-un at a US-DPRK Summit.

According to reports, this decision was taken spontaneously by president Trump following discussions in the Oval Office with a South Korean delegation headed by ROK National Security Advisor Chung Eui-yong on March 8:

In a stunning turn of events, Trump personally intervened in a security briefing intended for his top deputies, inviting the South Korean officials into the Oval Office, where he agreed on the spot to a historic but exceedingly risky summit with North Korean dictator Kim Jong Un. (WP, March 9, 2018)

Trump announced his decision on the driveway outside the West Wing of the White House to the media, which was immediately broadcast live on TV networks Worldwide.

Sanctions would remain in place. The underlying focus would be to demand that the DPRK abandon its nuclear weapons program. According to White House sources, President Trump would require  “concrete steps and concrete actions” by North Korea prior to the conduct of the proposed summit.

On Friday 9 March, Trump announced that a deal with North Korea was “very much in the making”. In the words of Rex Tillerson, it was Trump that took the decision:

“In terms of the decision to engage with President Trump and Kim Jong Un, that’s a decision the president took himself, … He’s expressed it openly before about his willingness to meet with Kim Jong Un, so now I think it’s a question of agreeing on the timing of that first meeting between the two of them and a location.” (quoted in the WSJ, March 9, 2018)

North-South inter-Korean peace talks were initiated on January 9th, pursued throughout the Winter Olympics. What was revealed were the public statements of South Korea’s president Moon, the major events surrounding the Olympics including the inauguration ceremonies pointing to ties of friendship and solidarity between the two Koreas.

Several media described the inter-Korean dialogue as a “slap in the face” to Washington, which attempted to sabotage the North-South talks. In what was described as “A War against the Peace”, the Pentagon responded by threatening a “Bloody Nose” operation using tactical nuclear weapons against North Korea. US threats emanating from the White House were also directed against the South Korean government of President Moon, intimating that restrictions on bilateral trade and investment against the ROK would be contemplated.

What was no revealed to the public were the discussions (of an entirely different nature) behind closed doors of North and South Korean officials as well as the role of US intelligence in these negotiations.

The CIA has a close and overlapping working relationship with its ROK counterpart The Korea Central Intelligence Agency (KCIA) (now referred to as The National Intelligence Service). The KCIA created in 1961 during the US sponsored military regime of President Park Chung-hee, has consistently acted as a de facto subsidiary of the CIA.

In turn, the KCIA has developed a bilateral working relationship with its North Korean intelligence counterparts. Prior and in the course of the Winter Olympics, several key bilateral meetings were held between key national security and intelligence officials of North and South Korea.

South Korean President Moon Jae-in’s National security adviser Chung Eui-yong was put in charge of the negotiations in Pyongyang, officially acting on behalf of South Korea, but also (indirectly) on behalf of the United States.

On March 6-7, (local time), Chung Eui-yong, together with four other senior ROK officials met up with the DPRK leadership in Pyongyang. The delegation was also received at a State dinner with the Kim Jong-un.

The ROK delegation also included  Suh Hoon, head of the ROK’s National Intelligence Service (KCIA), who was appointed by President Moon in May 2017. His appointment had been approved by Washington.

While KCIA Chief Suh Hoon had previously worked on a mandate geared towards dialogue and peace on behalf of the Kim Dae-jung and Roh Moo-hyun administrations, and now on behalf of President Moon government, he nonetheless has routine consultations with CIA director Michael Pompeo. It is highly unlikely that Suh Hoon and Chung Eui-yong would have acted without consulting their counterparts in Washington, namely CIA Director Mike Pompeo and National Security Adviser General H. R. McMaster.

The debriefing meeting in the Oval Office (March 8) with Chung Eui-yong and Suh Hoon was carefully scheduled immediately following the talks in Pyongyang on March 6-7. According to the Korean Times:

Chung is likely to play the role of messenger between Pyongyang and Washingtonfor their talks on denuclearization. Chung and Suh will visit Washington soon after they come back from Pyongyang.

Suh is Moon’s top strategy maker on North Korea issues and one of the President’s closest aides who helped him draw up his peace overture plans.

Under the former liberal Kim Dae-jung and Roh Moo-hyun administrations, Suh was a member of the teams that led the first and second inter-Korean summits in 2000 and 2007, respectively. He met former North Korean leader Kim Jong-il, Kim Jong-un’s father, on several occasions during the summits.

Suh was a member of the National Security Council and was in charge of North Korea strategy at the NIS under the Roh government, having experience in negotiating with high-ranking North Korean officials at many meetings. He was a member of Moon’s election camp for both the 2012 and the 2017 presidential elections.

As the head of the spy agency, Suh has a close communication channel with U.S. CIA Director Mike Pompeo. It was the two spy agencies that mediated the meeting between U.S. Vice President Mike Pence and Kim Yo-jong during their stays in South Korea in early February, although the meeting was cancelled at the last minute. (Korean Times, March 10, 2018, emphasis added)

The Decision to Meet Kim Jong-un

In all likelihood Trump’s decision was approved at the highest levels of US intelligence.

There was nothing spontaneous in Trump’s statement. It was staged. No doubt he had been advised by both Pompeo and McMcmaster. His announcement followed the briefing by the head of the South Korean Delegation, ROK National Security Advisor Chung Eui-Yong, who had led the mission to Pyongyang on March 6.  Mr Chung briefed president Trump, who immediately and spontaneously confirmed his decision.

The tone of Mr. Chung’s statements were skilful and diplomatic, praising president Trump, intimating that the ROK delegation to Pyongyang was in fact also acting (indirectly) on behalf and in consultation with Washington.

From his statement (see below) it would appear that the North Korean leadership is prepared to cave in to US demands. He also congratulated President Trump for his “maximum pressure policy” directed against the DPRK leadership:

CHUNG:    Good evening.  Today, I had the privilege of briefing President Trump on my recent visit to Pyongyang, North Korea.  I’d like to thank President Trump, the Vice President, and his wonderful national security team, including my close friend, General McMaster.

I explained to President Trump that his leadership and his maximum pressure policy, together with international solidarity, brought us to this juncture.  I expressed President Moon Jae-in’s personal gratitude for President Trump’s leadership.

I told President Trump that, in our meeting, North Korean leader Kim Jong-un said he is committed to denuclearization.  Kim pledged that North Korea will refrain from any further nuclear or missile tests.  He understands that the routine joint military exercises between the Republic of Korea and the United States must continue.  And he expressed his eagerness to meet President Trump as soon as possible.

President Trump appreciated the briefing and said he would meet Kim Jong-un by May to achieve permanent denuclearization.

The Republic of Korea, along with the United States, Japan, and our many partners around the world remain fully and resolutely committed to the complete denuclearization of the Korean Peninsula.  Along with President Trump, we are optimistic about continuing a diplomatic process to test the possibility of a peaceful resolution.

The Republic of Korea, the United States, and our partners stand together in insisting that we not repeat the mistakes of the past, and that the pressure will continue until North Korea matches its words with concrete actions. (source: White House)