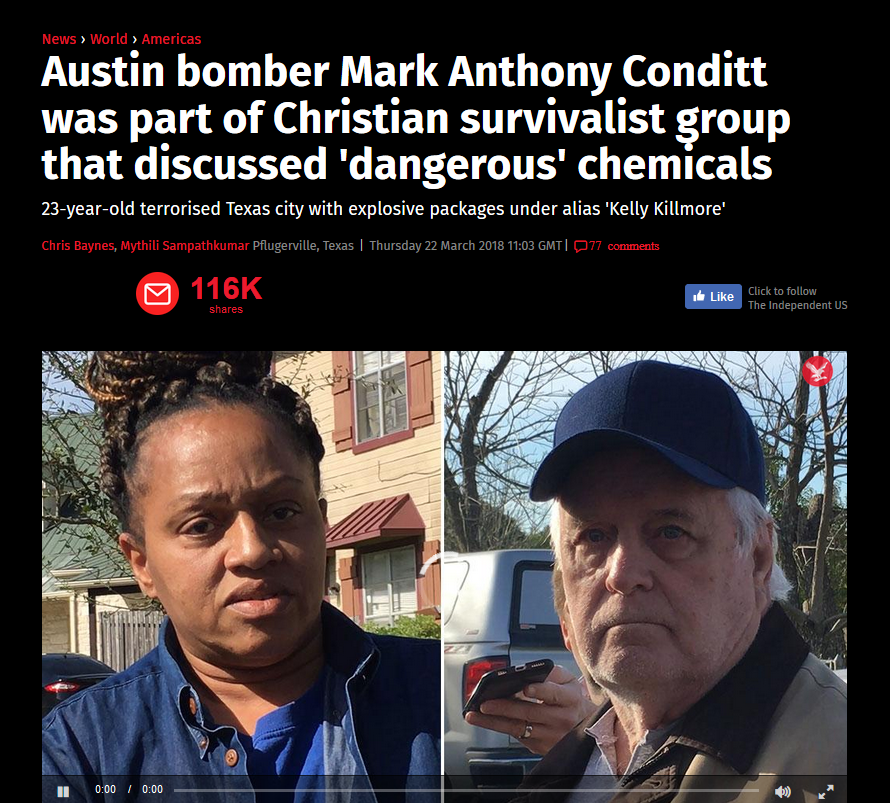 If a Muslim bomber had received religious-based weapons training (Independent, 3/22/18), that would likely be the lead fact in every report on them.

Remember that Muslim mass murderer who belonged to an Islamic home-madrassa called INTIFADA, where knife-wielding Shari’a survivalists studied the Qur’an, guns and dangerous chemicals? And how the liberal media fawningly portrayed him as a misunderstood and under-loved young man otherwise full of promise?

You don’t, because that never happened. But have you heard about of the Christian Texas child-killer from an all-white sect who slaughtered the president of a homeowners’ association and a 17-year-old aspiring neurosurgeon, both on their own doorsteps and in front of their families? Both victims were African-Americans. This same murderer was a suicide bomber who blew himself up before police could arrest him and take him for a hamburger (as they did with Dylann Roof, the young white man who killed nine African-Americans at their church).

END_OF_DOCUMENT_TOKEN_TO_BE_REPLACED

2018 Gun Debate A Narrow Opportunity For Democrats, A Wide One For the Left

– Bruce A. Dixon , BAR managing editor
Democrats want a gun debate on narrow and limited ground avoiding the settler-slavemaster-colonial origin of the 2nd Amendment, and the ubiquity of armed white patriarchal US violence across the planet. Will we let them have it?

END_OF_DOCUMENT_TOKEN_TO_BE_REPLACED

Cambridge Analytica, owned by Robert Mercer, is in the news, but other companies — like the Koch Brothers’ i360 and Karl Rove’s Data Trust — are far more dangerous, says investigative reporter Greg Palast END_OF_DOCUMENT_TOKEN_TO_BE_REPLACED

The scandal surrounding Facebook’s relationship with Cambridge Analytica, the election data company previously associated with former Trump campaign Chairman Steve Bannon, dominates the media in the US and Britain.

The serious privacy concerns involved in the harvesting of the personal information of some 50 million Facebook users were underscored by Britain’s Channel 4 News. An undercover investigation filmed Cambridge Analytica CEO Alexander Nix boasting of dirty tricks operations to ensnare politicians and subvert elections.