The State Department then changed the agenda:

“The idea was to have a conference, a ministerial, and basically break our diplomatic isolation on Iran,” said a person familiar with the planning of the event. “It started out as an Iran conference in disguise but has probably actually been forced to take on more actual broader Middle East content now.”

The person added: “They changed some of the focus and were forced to pony up with content on Syria and Yemen particularly.”

The meeting took place today but the European powers did not fall for the trick. They want keep the nuclear agreement with Iran:

Even Poland on Tuesday said it disagreed with the U.S. approach to Iran. Foreign Minister Jacek Czaputowicz told reporters the nuclear pact was valuable and expressed hope the conference could help participants find common ground.

While the U.S. delegation includes Vice President Mike Pence, Secretary of State Mike Pompeo and senior White House adviser Jared Kushner, other major players have either refused to attend or are sending low-level delegations. The EU’s foreign-policy chief, Federica Mogherini, said she had other commitments.

Germany and France only sent lower level staff. The British foreign minister will only attend a side session on Yemen.

The State Department went to some length to obfuscate the real purpose of the conference. Its press statement today says:

The agenda is wide-ranging, and will include a discussion of the Administration’s efforts to promote a comprehensive and lasting peace between Israel and the Palestinians, as well as a conversation on how to address ongoing regional humanitarian crises. The Secretary will provide an update on the situation in Syria and discuss other U.S. priorities in the region, including concerns regarding Iran’s destructive activities.

Smaller breakout sessions will provide ministers the opportunity to focus on specific areas of concern such as missile development and proliferation, cyber security and emerging threats, and terrorism and illicit finance.

That State Department effort to somewhat hide the real agenda was sabotaged when the Prime Minister of Israel arrived and made it clear what the meeting is all about:

I am going to a meeting with 60 foreign ministers and envoys of countries from around the world against Iran. What is important about this meeting – and this meeting is not in secret, because there are many of those – is that this is an open meeting with representatives of leading Arab countries, that are sitting down together with Israel in order to advance the common interest of war with Iran.“ 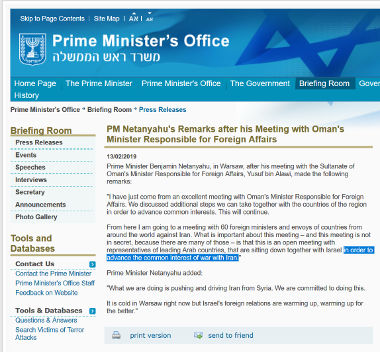 The statement has now been changed into “combating Iran”. But that is not what Netanyahoo said in Warsaw and there is video to prove it. There were also witnesses:

Did @netanyahu really say “war” with Iran? I was there and the word was ”milchama” = war.

Why is Netanyahoo doing this?

No other country, except maybe the U.S.,  has any interest in waging war on Iran. Certainly not the Arab countries near the Persian Gulf. In case of a war they are all extremely vulnerable to Iranian retaliation. Their oil and gas installations would be in serious danger. The desalination plants which provide their drinking water are all within easy reach of Iranian missiles.

By claiming that the conference is about waging war on Iran Netanyahoo is not only embarrassing the State Department and Secretary Mike Pompeo. He also makes it extremely difficult for other attendees to justify their presence. The Arabs will be especially furious that they are shown in such an open alliance with Israel and its hostility against Iran. Scheming with Israel in the dark is fine. But being publicly associated with a war mongering Israel is difficult to sell to their people. It would be unsurprising to see some of them leave.

The whole conference is an own goal for the Trump administration. Instead of showing unity with its allies it now only demonstrates the depth or their disagreement. Netanyahoo’s statement may help him to win some votes in the upcoming election in Israel. But the hoped for alliance with the Gulf Arabs is now as far off as it has ever been.