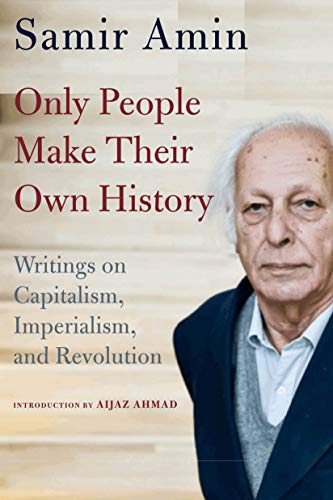 Samir Amin (1931-2018) was one of the great organic intellectuals of our time. He synthesized theory and practice; Marxism and developmentalism; comradeship and critique, like no other. Only People Make Their Own History is the first ever posthumous publication of Amin’s work. It includes ten of Amin’s most important essays published in the 21st century, and an introduction by renowned Marxist literary critic, Aijaz Ahmad.

Ahmad ‘situates’ Amin’s work in the context of decolonization and socialist ascendancy following WW2. The great intellectual project of this time was the synthesis of Marxism and the various intellectual traditions of the Global South. Ahmad notes Amin’s two major contributions to this project; (1) updating Marx’s thought on peripheral countries (taking from description to conceptualization; from focusing on precapitalist societies to contemporary capitalist ones) and (2) complementing the cultural analyses of people like Fanon and Cesaire with a rigorous political economic analysis.

Next, Ahmad engages with some of Amin’s key concepts. He notes that Amin’s ‘collective imperialism’ is vague with respect to the possibility of renewed inter-imperialist rivalries. I would agree. Amin asserts that the US, Europe, and Japan, are imperialist partners with a common interest in military control of the planet, yet they are also unequal partners who share the spoils unequally amongst themselves. How unequal they have to get before they renounce their common interest is unclear.

Ahmad also notes that Amin’s endorsement of the ‘national united front’ (which includes the bourgeoisie) contradicts his thesis on the recompradorization these very bourgeoisies. Here I think what Amin might have had in mind was a substitution of the middle classes for the national (now comprador) bourgeoisie. He mentions this possibility in a 2015 interview with Lau Kin Chi.

Finally, Ahmad notes that Amin’s later-in-life embrace of ‘social movements’ sits uneasily with his earlier insistence on the primacy of political parties along Leninist lines. There is indeed a contradiction here. And it goes back to the old problem of the ‘revolutionary agent’ in Amin’s thought. Who, asked Aidan Foster-Carter in 1982, is going to make the revolution, if, as Amin says, the peripheral bourgeoisies are corrupt, the workers at the center are asleep, and the peripheral peasantries are spellbound by tradition? But as we know, Amin later changed his position on the peasantry after seeing Mao, Ho and others, pull the peasantry away from reactionary traditionalism. Perhaps he thought the same was possible with social movements; pulling them away from romantic particularism.

The essays that follow are arranged chronologically from 2000, to 2018. The first one, written in 2000, takes a look back at the 20th century and tries to draw some lessons for the 21st. One is that praxis is primary (the long crisis that opened up in 1873, was responded to not with debates and discussions, but with wars and revolutions). Another is that the South is (or can be) a major actor in world history (the US and USSR had to adjust to the ex-colonies, not the other way around).

The next essay examines 21st century capitalism (it’s economic aspects at least; politico-historical features are treated in the volume’s fourth essay). Amin argues that depeasantization has not put an end to the agrarian question. On the contrary, it is creating a ‘planet of slums’ which portends a massive political rupture. Similarly, segmentation of the working class has not negated the labor question. Marx’s law of pauperization is still visible when we look at the world as a whole (not just the situation in rich democracies).

The third essay looks at Political Islam. Some of Amin’s earliest writings are on the impotence of ‘traditionalisms’ and ‘communalisms’ of all sorts. It’s no wonder then that he thoroughly castigates Political Islam here. Amin notes that, on the political economic plane, Political Islam is completely aligned with the Washington Consensus. Therefore, it cannot solve the problems of the people it claims to defend.

Essay number four situates 21st century capitalism in the context of capitalism’s 600 year history. Amin reiterates the theory of historical capitalism he developed in the 80s with one important change; imperialism begins in 1500 not 1880, as he asserted previously (Murray Noonan has also picked up on this shift). Then Amin introduces a new phase of capitalism – ours – called ‘generalized monopoly capitalism’ based on a number of characteristics which he outlines.

The fifth essay concerns China. Ray Bush (2018) was probably right when he said that Amin has visited China more than any foreigner on the left. Drawing on his immersion in the Chinese Left, Amin paints a picture of the Chinese project that is scarcely recognized in the West. China is not an emerging country, it is the emerging country; it alone ‘walks on two legs’ (economics and geopolitics).

Essay number six addresses Fascism. Amin surveys the varieties of Fascism in both North and South, but ultimately emphasizes their common denominators; (1) instrumentalization for the management of capitalism in crisis, and (2) support from the western right.

The seventh essay examines 21st century imperialism. First, Amin notes some key lessons from the anti-imperialist struggles of the 20th century (the main one being what Lin Chun calls, the ‘dialectic of backwardness’). Contra theorists like Leo Panitch and Sam Gindin, Amin maintains the primacy of the economic dimension of imperialism; transformations of capitalism drive transformations of imperialism, not the other way around.

The ninth essay looks at the Global North. Amin has been criticized by many for having an overly jaundiced view of the Western working class (Pieterse 1994; Smith 1982; Noonan 2017). Amin remains harsh in this essay. He sees no revolutionary potential anywhere in the North, except in Eruope (but even here the chances are slim). Nevertheless, Amin acknowledges that Europe did leap ahead of the South in the 17th, 18th, and 19th centuries; radically breaking with true ‘thrid-worldists’ who contend that the West has always been barbarous and backwards.

The tenth essay is a reprint of the closing chapter of Amin’s Class and Nation (1980). It presents Amin’s bottom line appeal for revolutionary praxis. He draws an analogy between the Roman collapse and our own time; in both cases, surpluses are overcentralized. The outer provinces are impoverished while workers at the center are bought off with ‘bread and circus’. The system has to come apart, but the Roman disintegration was unmastered. The people were unconcious of what was happening and we slipped into five centuries of barbarism. So, Amin concludes, what will be our choice today? Will we repeat the Roman decadence? Or will we forge revolutionary advances that open the way to a higher stage of civilization?

The final essay commemorates the 170th anniversary of the Communist Manifesto, and summarizes Amin’s lifetime of work, which are framed as extensions of Marx’s original project, laid out so masterfully in the Manifesto.

The selection of essays for this volume is quite simply excellent. The full breadth of Amin’s work is represented – political economy, history, cultural theory, politics; it’s all there. Plus, central concepts developed prior to 2000 (such as ‘the tributary mode of production’ and ‘the law of worldwide value’) are covered, even though none of the essays published were published prior to 2000. A second volume incorporating precisely such essays should be published. This way we can see some of the longer term trends in Amin’s thought, and get into the all important details of the concepts that are only just introduced here.

The commentary provided by Aijaz Ahmad was likewise excellent, and I have given my thoughts on them in brief above.

Perhaps the key weakness of this volume is the absence of a recommended reading list. Those primed by this excellent primer might not know where to go next for more of Amin’s stimulating insights. As partial remedy, I provide the following appended bibliography. Readers who are interested may contact me for the full version, or to discuss my current project; an intellectual biography of Samir Amin.

Justin Theodra is a recent graduate from UC Irvine, entering graduate school in the fall of 2019. He is working on an intellectual biography of Samir Amin, and has interests in Marxian political economy, intellectual history, and Southeast Asia. Contact: jtheodra@uci.edu | justintheodra.wordpress.com