The climate crisis constitutes the greatest existential threat humanity has ever faced and nature has suffered since 66 million years ago. From 1870 to 2014, cumulative carbon emissions totaled about 545 GtC (Billion ton/year).Emissions are partitioned among the atmosphere (approx. 230 GtC or 42%), ocean (approx. 155 GtC or 28%) and land (approx. 160 GtC or 29%). The transfer of additional part of the known fossil fuel reserve of >3000 GtC to the atmosphere is threatening to render large parts of the Earth uninhabitable. Yet, bar lip service and non-binding agreements, world governments are now presiding over the demise of much of the global biosphere and of civilization. As the planet keeps warming and the powers to be are spending $trillions on so-called “defense” and murderous wars, tragically people and nature suffer. 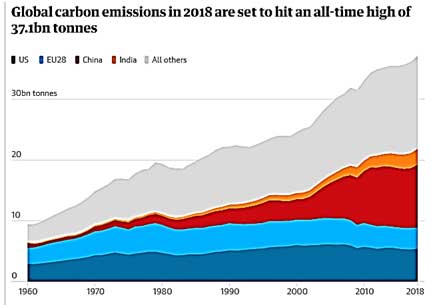 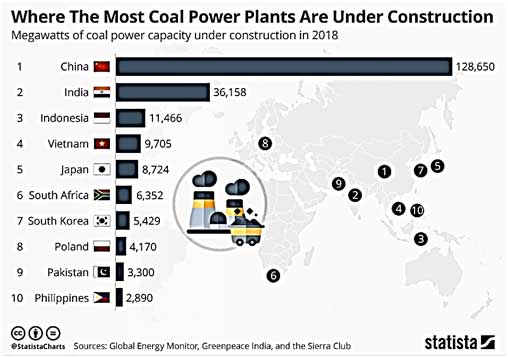 Every week the internet reports newly discovered and exploited coal, oil and gas fields. Just as often it reports cyclones, floods and fires. The two are intrinsically linked. Whereas any single extreme weather event may not be related to global warming, the trippling of the incidence of extreme weather events heralds the rising warming/energy of the planetary system away from conditions that allowed humans to flourish in the Neolithic, as contrasted with conditions in which stone age people had to struggle to survive.

As a consequence of global carbon emissions by 2018 mean temperatures reached +0.98C over pre-industrial conditions and rose further by more than +0.5C over the continents. For example in Mongolia reaching +2.2C.The temporary masking effect by human-emitted aerosols potentially accounts for latent additional temperature rise of between 0.5 and1.0C (as was manifested for example when jet flights contrails were discontinued on 9/11).

In coastal regions and islands the rise in temperature is driving increasingly intense cyclones and flood events, such as hit the Caribbean islands, southeastern Texas, Florida, Mississippi,  southwest Pacific islands, the Philippines, Kerala, Mozambique, Zimbabwe, Japan, Queensland, and other regions.

Figure 3. (a) CO2 concentration rise 1970-2100and (b) mean temperature rise to 2100 to levels well above the stability limit of the large ice sheets

In terms of the effects of global warming on human life (OECD “Climate change: Consequences of inaction”), a quantitative risk assessment by the World Health Organization (WHO) suggests additional climate change-related deaths for the year 2030 would total241000people(38000 due to heat exposure in elderly people, 48000 due to diarrhea, 60000 due to malaria, and 95000 due to childhood under-nutrition).A review of the effects of extreme weather events in 2018 is given in “Deadly weather: the human cost of 2018’s climate disasters – visual guide” by Daniel Levitt et al (2018).

A changing climate not only affect agriculture but also leads to greater food spoilage from heat, leading to diarrheal illnesses and hunger that caused around 310,000 deaths in 2010. Heat and cold illnesses, malarial and vector-borne diseases, meningitis and environmental disasters account for the rest of the almost 700,000 deaths attributable to these direct climate impacts. Pollution, indoor smoke, and occupational hazards related to the carbon economy cause the rest of those 5 million deaths(Figure 4) through ailments like skin and lung cancer. 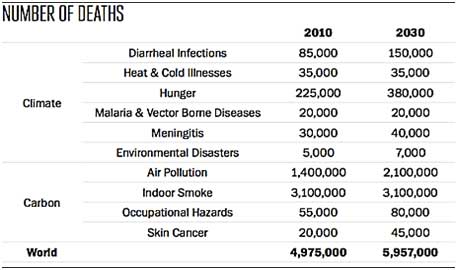 The melting of the polar ice sheets, where warming takes place at twice the rate as over the rest of the Earth, heralds a fundamental climate shift. Development of temperature contrasts between cold ocean regions and warming tropical regions (Figure 5) would lead to storminess, costing the lives of millions. 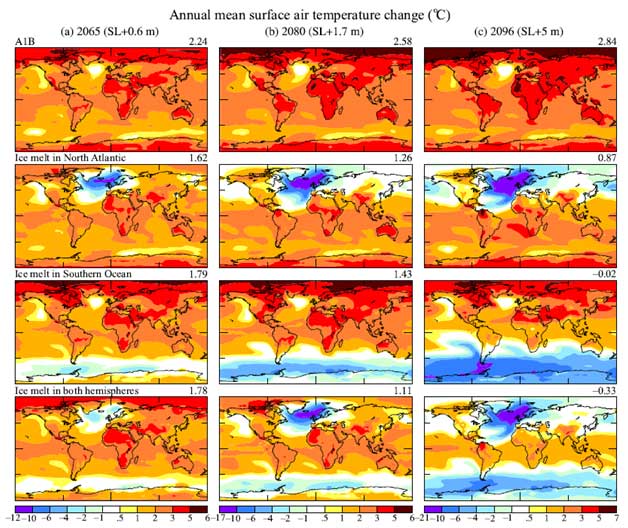 Figure 5. Hansen et al.’s 2016 model of global land and sea climate changes in 2065, 2080 and 2096, according to the IPCC emission scenario AIB. As melting of the Greenland and Antarctica ice sheets progress large volumes of cold ice melt water flow into the North Atlantic Ocean and the southern ocean, leading to meters-scale sea level rise and to transient cooling of the oceans. Until near-complete melting of polar ice allows resumed rise of global temperature rise, tropical zones and deep sea continue to warm. Near-complete melting of the large ice sheet would allow the Earth to return to climate conditions such as existed in the Early Eocene.

Life on Earth is controlled by presence of water, insolation, the composition of the atmosphere and oceans, asteroid impacts and large volcanic eruptions. Cyclic and abrupt changes in these factors have affected the climate over billions of years. Sharp rises in atmospheric greenhouse gas concentrations, such as about 66 and 56 million years ago and at present have and are leading to major crises in nature. The current rise in atmospheric greenhouse gas concentration, combining the effects of CO2, methane and nitric oxide, is now tracking toward 500 ppm CO2 equivalent, the stability threshold of the large ice sheets. The consequent rise in mean global temperature by of 3 to 4 degrees Celsius over a period as short as a century or so represents oneof the largest catastrophes recorded in geological history, posing an existential threat for most species and for civilization. Current manifestations include a growing spate of extreme cyclones, floods, droughts and fires killing large number of people. Inexplicably business as usual persists among the political classes, chief executives and the media, expressing a plethora of half-truths and lies, defying the original definition of the species as “sapiens”.

Andrew Glikson is an Earth and Climate scientist