I am writing you from Montpellier, France, where I am a participant-observer in the Yellow Vest (Gilets jaunes) movement, which is still going strong after six months, despite a dearth of information in the international media. 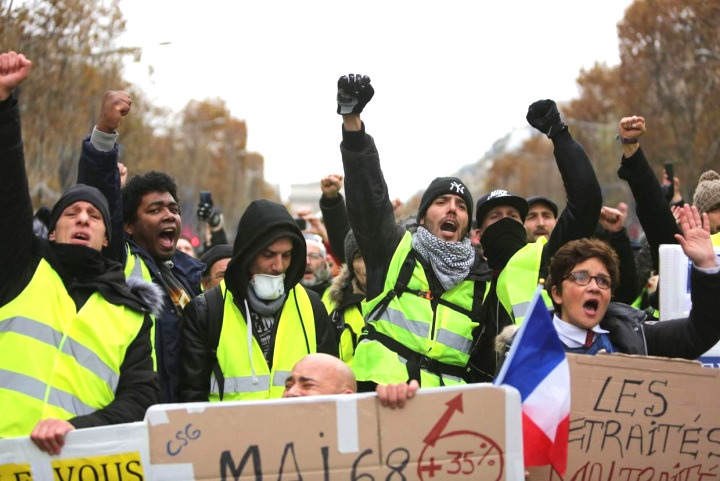 But why should you take the time to learn more about the Yellow Vests? The answer is that France has for more than two centuries been the classic model for social innovation, and this unique, original social movement has enormous international significance. The Yellow Vests have already succeeded in shattering the capitalist myth of ‘representative democracy’ in the age of neoliberalism. Their uprising has unmasked the lies and violence of republican government, as well as the duplicity of representative institutions like political parties, bureaucratic unions, and the mainstream media.

Moreover, the Yellow Vests represent the first time in history that a spontaneous, self-organized social movement has ever held out for half a year in spite of repression, while retaining its autonomy, resisting cooptation, bureaucratization and sectarian splits. All the while, standing up to full-scale government repression and targeted propaganda, it poses a real, human alternative to the dehumanization of society under the rule of the capitalist ‘market’.

A Different Kind of Uprising

Six months ago, on November 17, 2018, Yellow Vests burst ‘out of nowhere’, with autonomous local units springing up all over France like mushrooms, demonstrating on traffic circles (roundabouts) and toll-gates, marching every Saturday in cities, including Paris. But unlike all previous revolts, it was not Paris-centered. The humid November soil from which these mushrooms sprouted was the near-universal frustration of French people at the abject failure of the Confédération générale du travail (CGT) and other unions to effectively oppose Macron’s steam-roller imposition last Spring of his historic Thatcherite ‘reforms’: an inflexible neoliberal program of cutting benefits, workplace rights, and privatizing or cutting public services, while eliminating the so-called Wealth Tax designed to benefit the poor.

The immediate cause of this spontaneous mass uprising was to protest an unfair tax on fuel (fiscal justice), but the Yellow Vests’ demands quickly expanded to include restoration of public services (transport, hospitals, schools, higher wages, retirement benefits, healthcare for the poor, peasant agriculture, media free of billionaire and government control, and, most remarkably, participatory democracy. Despite their disruptive tactics, the Yellow Vests were, from the first, wildly popular with average French people (73 per cent approval), and they are still more popular than the Macron government after six months of exhausting, dangerous occupations of public space, violent weekly protests, and slanderous propaganda against them.

Tired of being lied to, cheated, manipulated, and despised, the Yellow Vests instinctively from the beginning rejected being instrumentalized by the corrupt ‘representative’ institutions of capitalist democracy – including political parties, union bureaucracies, and the media (monopolized by billionaires and subsidized by the government). Jealous of their autonomy, a concept which radical intellectuals have been exploring for years, the Yellow Vest movement eschewed ‘leaders’ and spokespeople even among their own ranks, and are even now very gradually learning to federate themselves and negotiate convergence with other social movements.

Macron’s violent repression of political opposition is responsible for at least two deaths, 23 demonstrators blinded in one eye, and thousands seriously wounded. It has been condemned by the UN and the European Union. But Macron has never acknowledged these injuries, which are rarely shown in the media. The TV news concentrates on sensational images of the violence (to property) of the Black Block vandals at the fringes of Yellow Vest demonstrations, never on the human victims of systematic government violence. A popular slogan proclaimed in Magic Marker on a demonstrator’s Yellow Vest reads: “Wake up! Turn off your TV! Join us!”

Since the Yellow Vests have no recognized spokespersons, government propaganda, abetted by the media, has had a free hand to dehumanize them in order to justify treating them inhumanly. Macron, from the height of his monarchical presidency, at first pretended to ignore their uprising, then attempted to buy them off with crumbs (a very few crumbs, which were rejected) and then denounced them as “a hate-filled mob.” (N.B. In real life the Yellow Vests are largely low-income middle-aged folks with families from the provinces whose trademark is friendliness and improvised barbecues.) Yet for Macron and the media they constitute a hard-core conspiracy of “40,000 militants of the extreme right and the extreme left” often characterized as “anti-Semites” who threaten the Republic.

Small wonder that, subjected to increasing violence and continuous slander, the numbers of Yellow Vests willing to go out into the streets to protest every week has diminished over 27 weeks. But they are still out there, and their favorite chant goes: “Here we are! Here we are! What if Macron doesn’t like it? Here we are!” (On est là! Même si Macron ne veut pas, On est là!).

Finally, Support from Other Groups 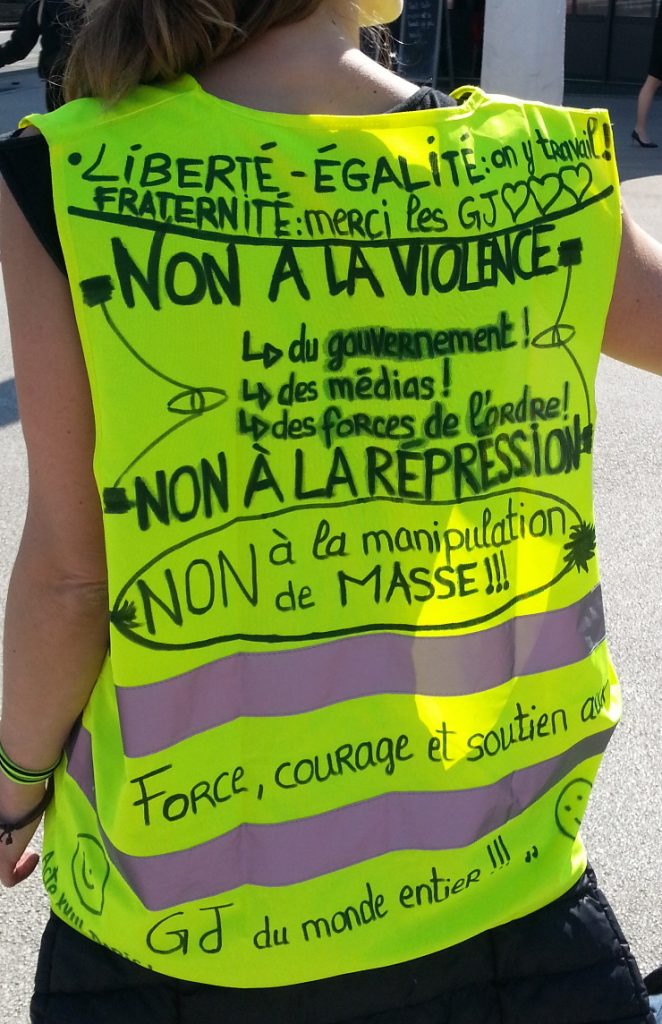 Fortunately, in the past few weeks the League for the Rights of Man and other such humanitarian groups have at last turned out to protest police brutality, while committees of artists and academics have signed petitions in support of the Yellow Vests’ struggle for democratic rights, condemning the government and media. At the same time, Yellow Vests are more and more converging with Ecologists (“End of the Month/End of the World/Same Enemy/Same Struggle”), feminists (who play a major role in the movement).

Workers have also played an important role, many of them active as opponents of the bureaucracy in their unions. Red CGT stickers on Yellow Vests are now frequent sights at demos. Philippe Martinez, the General Secretary of the CGT, who has heretofore been sarcastic and negative about the Yellow Vests, has now been forced to admit that the cause of their rise was the failure of the unions, “a reflection of all the union deserts.” He was referring to “small and medium size businesses, retired people, poverty people, jobless people, and lots of women” (the demographic of the Yellow Vests) that the unions have ignored.

The Yellow Vests are still here, in the fray, holding the breach open. The crisis in France is far from over. If and when the other oppressed and angry groups in France – the organized workers, ecologists, North African immigrants, students struggling against Macron’s educational ‘reforms’ – also turn off their TVs and go down into the streets, things could change radically. The Yellow Vests’ avowed goal is to bring France to a grinding halt and impose change from below.

What if they succeed? We know what the ‘success’ of structured parties like Syriza in Greece and Podemos in Spain led to. Maybe a horizontal federation of autonomous base-groups attempting to re-invent democracy could do better.

P.S. Latest news: the CGT just held its convention and voted unanimously for “convergence” with the Yellow Vests, something our group in Montpellier has been working toward for months. On May 18th, for the first time, we are meeting with the other Yellow Vest groups in our region. “On ne lâche rien!” (Nothing escapes us, we don’t give in). •

Richard Greeman has been active since 1957 in civil rights, anti-war, anti-nuke, environmental and labour struggles in the U.S., Latin America, France (where he has been a longtime resident) and Russia (where he helped found the Praxis Research and Education Center in 1997). He maintains a blog at richardgreeman.org.