Italy has just launched a magnificent military ship, the Trieste, in the presence of the political, military and religious authorities. So why did Manlio Dinucci have to ruin the celebrations by revealing certain uncomfortable truths ? 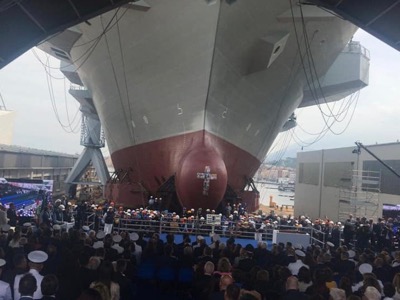 On 25 May 2019, Head of State Sergio Mattarella, Minister for Defence Elisabetta Trenta, Minister for Economic Development Luigi Di Maio, and the highest military authorities, were all present for the launching of the ship Trieste, built by Fincantieri, at the Castellammare di Stabia shipyards (Naples).

The Trieste is the Italian Navy’s multi-role and multi-function amphibious craft, defined by Trenta as the « perfect synthesis of our country’s capacity for technological innovation ». It is 214 metres long and can reach speeds of up to 25 knots (46 km/h). It has a 230-metre flight deck for helicopter take-off, F-35B fighters with short take-off and vertical landing, and V-22 Osprey convertibles. On its garage deck, it can transport armoured vehicles which can cover a linear distance of 1,200 metres. It has an internal launch deck, 50 metres long and 15 metres wide, which enables the ship to operate with NATO’s most modern amphibious vehicles.

In technical terms, it is a ship destined to « project and support, in crisis areas, the disembarkation of the naval military forces and the national capacity for the projection of Defence from the sea ». In practical terms, it is an amphibious assault ship which, by approaching the coast of a target country, can attack it with fighters and helicopters armed with bombs and missiles, then invade with a battalion of 600 men transported, with their heavy weaponry, in helicopters and disembarkation vehicles. In other words, it is a weapons system projected not for defence but attack in large-scale war operations in the context of long-distance USA/NATO « force projection ».

The decision to build the Trieste was taken in 2014 by the Renzi government, which presented it as a naval military naval craft to be used mainly for « humanitarian assistance activities ».

The cost of the ship, to be assumed not by the Ministry for Defence but by the Ministry of Economic Development, was quantified as 844 million Euros, in the context of the financing of 5,427 million Euros for the construction of nine other warships as well as the Trieste. Among these are two other high-speed naval patrol units for the special forces in « operations which require discretion », in other words, secret war operations.

At the moment of launching, the cost of the Trieste was estimated at 1,100 million Euros, or 250 million Euros more than the planned cost. The final cost will be even higher, because of the budget for the F-35B fighters and helicopters taken on board, plus that of the other weapons and electronic systems with which the ship will be equipped in the years to come.

The technical innovation in the military sector – announced the Ministry of Defence – « must be supported by the certainty of the finances ». That is to say the continual and growing financing with public money, including by the Ministry of Economic Development, now headed by Luigi Di Maio. At the launching ceremony, he promised the workers that there were to be other investments : indeed, there are other warships which need to be built.

The launch ceremony took on a different significance when the Vicar of the Armed Forces, Monseigneur Santo Marcianò, praised the fact that the workers had attached a large cross to the prow of the ship, composed of sacred images for which they have a special devotion , including those of Pope Wojtyla and Padre Pio. Monseigneur Marcianò praised the « power of faith » expressed by the workers, whom he blessed and thanked for « this marvellous sign that you have attached to the ship ».

So was launched the great warship, presented as an example of our country’s capacity for innovation, paid for by the Ministry of Economic Development with our own money, subtracted from productive investments and social spending, blessed with the sign of the cross like in the time of the Crusades and colonial conquest.