In an address to West Point military graduates, US Vice President Mike Pence told them they will one day fight for America. “It’s a virtual certainty,” said Pence who was swelling with pride as he spoke, rather than lamenting.

END_OF_DOCUMENT_TOKEN_TO_BE_REPLACED 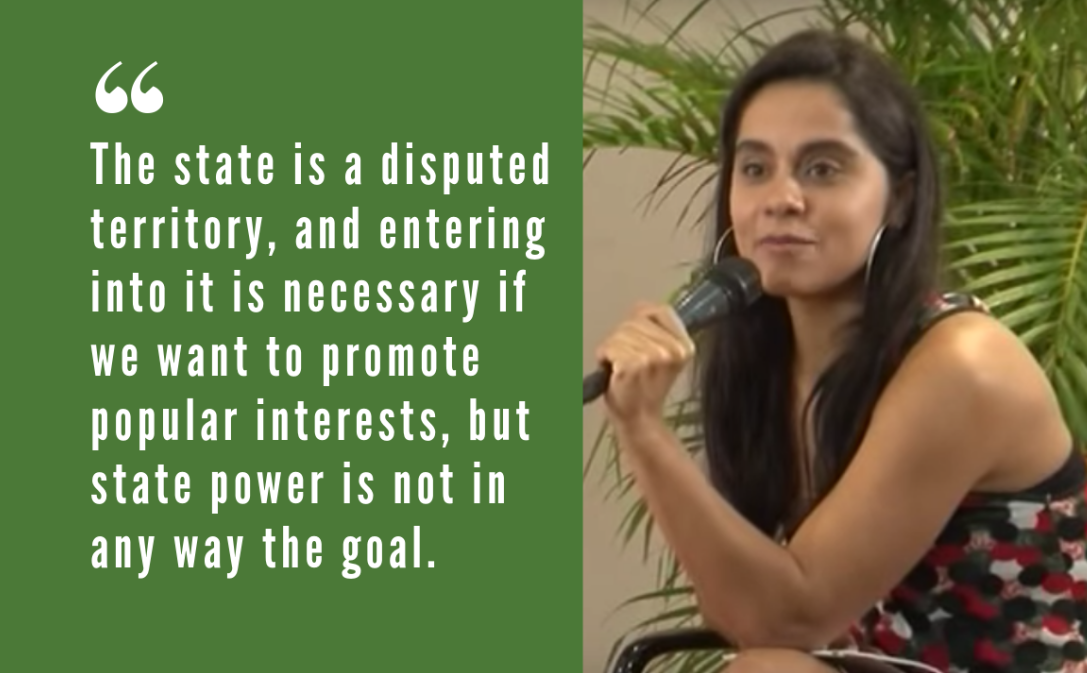 Martha Lia Grajales is part of the Surgentes Collective (a human rights organization) and a founding member of the San Agustin Convive cooperative. She is a lawyer, holding a master’s in human rights and democracy. In this interview, we ask her questions about the dialectic between state power and popular organization, with a view to understanding how grassroots initiatives might breath new life into the socialist project.

END_OF_DOCUMENT_TOKEN_TO_BE_REPLACED

When Jeremy Hunt decided to attack the United Nations on twitter yesterday, he didn’t expect them to respond. He got owned.

END_OF_DOCUMENT_TOKEN_TO_BE_REPLACED

An unnamed Norwegian official with inside knowledge of the talks between the Venezuelan opposition and government in Oslo said the opposition “needs to be more realistic.” We discuss the talks with Norwegian Venezuela specialist Eirik Vold (inc. transcript)

END_OF_DOCUMENT_TOKEN_TO_BE_REPLACED

How the persecution of Julian Assange by US could spectacularly backfire, explains lawyer

END_OF_DOCUMENT_TOKEN_TO_BE_REPLACED

Democracy Now has conducted a thorough interview with the UN Special Rapporteur who found that a collaboration between multiple governments in “a relentless and unrestrained campaign of public mobbing, intimidation and defamation” has placed such severe stress on WikiLeaks founder Julian Assange and done so much damage to his psychological well being that it can only be described as torture.

END_OF_DOCUMENT_TOKEN_TO_BE_REPLACED

We Can’t Have A Party of Our Own Because Poor People Can’t Be Trusted?

– Bruce A. Dixon , BAR managing editor
Poor people shouldn’t try to build their own party in the U.S. We just can’t afford It, and can’t be trusted.
END_OF_DOCUMENT_TOKEN_TO_BE_REPLACED

The Labour Party have suspended Pete Willsman, a member of their National Executive Committee, for being “antisemitic”.

The charge is that Willsman was recorded claiming that the antisemitism charges against the Labour party were all lies, and that a member of the Israeli embassy staff had been caught covertly giving money to Labour Friends of Israel, as well as planning to “take down” anti Israeli MPs.

The recording was released to LBC radio. It sparked outrage in all the predictable places.

END_OF_DOCUMENT_TOKEN_TO_BE_REPLACED

On the eighth of April, shortly before London police forcibly carried WikiLeaks founder Julian Assange out of the Ecuadorian embassy, a doctor named Sondra S Crosby wrote a letter to the Office of the United Nations High Commissioner for Human Rights requesting that the office look into Assange’s case. Today, following a scorching rebuke of multiple governments by UN Special Rapporteur on torture Nils Melzer, mass media outlets around the world are reporting that Julian Assange has been found to be the victim of brutal psychological torture.

END_OF_DOCUMENT_TOKEN_TO_BE_REPLACED

“There will come a time when it isn’t ‘They’re spying on me through my phone’ anymore. Eventually, it will be ‘My phone is spying on me.’” ― Philip K. Dick

Twenty years after the Wachowskis’ iconic 1999 film, The Matrix, introduced us to a futuristic world in which humans exist in a computer-simulated non-reality powered by authoritarian machines—a world where the choice between existing in a denial-ridden virtual dream-state or facing up to the harsh, difficult realities of life comes down to a red pill or a blue pill—we stand at the precipice of a technologically-dominated matrix of our own making.

END_OF_DOCUMENT_TOKEN_TO_BE_REPLACED

As digital technologies facilitate the growth of both new and incumbent organisations, we have started to see the darker sides of the digital economy unravel. In recent years, many unethical business practices have been exposed, including the capture and use of consumers’ data, anticompetitive activities and covert social experiments.

END_OF_DOCUMENT_TOKEN_TO_BE_REPLACED

Archaeologists, historians and anthropologists have an important role to play in the decision-making around how we build a sustainable food future.

A significant overhaul of the current global food system is needed to meet the challenges of feeding a growing world population and many stress that this is only achievable by changing diets, food production and reducing food waste.