Each D-Day anniversary the same question comes up. Who defeated Germany and its allies? The answer is, without any doubt, the Soviet Union.

But after decades of western propaganda the claims that the U.S. defeated the Reich has taken over many minds. Polls show that such propaganda works. More than half of the French people now believe that the U.S. contributed the most to the defeat of Germany. 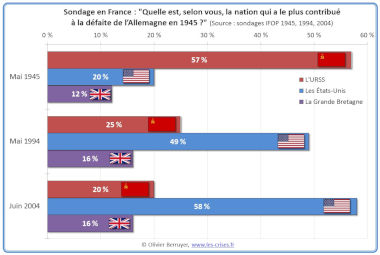 Many people think that the Soviet Union, now “the Russians”, were always the bad guys and that Germany was a loyal ally during that war. That is at least what the verified account of the British Royal Family seems to believe.

The Queen was introduced to leaders by the Prime Minister @10DowningStreet – each representing the allied nations that took part in D-Day. #DDay75 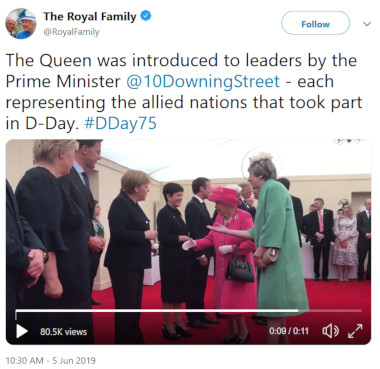 bigger(The tweet was since deleted but can still be seen at Archive.org)

The Russian President Vladimir Putin was not invited to the royal reception commemorating the 75th anniversary of D-Day. Instead the Queen shook hands with German Chancellor Merkel. Merkel should have rejected to be there unless Putin would also be invited. The leaders from other Soviet countries, Vladimir Zelensky of the Ukraine and Alexander Lukashenko from Belarus, should also be there.

There is of course some truthiness in saying that a few German divisions took part in D-Day. And a few dozens sub-par German division later joined the fight at the Western front. But at the same time some 200 division of German led forces were engaged in the east.

Two weeks after D-Day the Red Army launched Operation Bagration and attacked the German Army Group Centre lines in the east on a thousand miles long front. Within eight weeks the German led forces were pushed back some 200 miles. Most of the 30 some divisions under Army Group Centre’s command were destroyed. It was that attack that broke the back of the German Wehrmacht. Cynically said – the U.S. led invasion in the west was a mere diversion for the much larger attack in the east.

Ten years ago Anatoly Karlin wrote in The Poisonous Myths of the Eastern Front:

MYTH I: Heroic Americans with their British sidekicks won World War Two, while the Russian campaign was a sideshow.

REALITY: Although Western Lend-Lease and strategic bombing was highly useful, the reality is that the vast majority of German soldiers and airmen fought and died on the Eastern Front throughout the war.

Rüdiger Overmans in Deutsche militärische Verluste im Zweiten Weltkrieg estimates that from the Polish campaign to the end of 1944, 75-80% of all German armed forces personnel died or went missing in action on the Eastern Front up to the end of 1944. According to Krivosheev’s research, throughout the war, the vast majority of German divisions were concentrated against the Soviet Union – in 1942, for instance, there were 240 fighting in the East and 15 in North Africa, in 1943 there were 257 in the East and up to 26 in Italy and even in 1944 there were more than 200 in the East compared to just 50 understrength and sub-par divisions in the West. From June 1941 to June 1944, 507 German (and 607 German and Allied) divisions and 77,000 fighters were destroyed in the East, compared to 176 divisions and 23,000 fighters in the West. The two pivotal battles, Stalingrad and El Alamein, differed in scale by a factor of about ten.

This is not to disparage the Western Allied soldiers who fought and died to free the world from Nazism. In particular, the seamen who enabled Lend-Lease, at high risk of lethal submarine attack, to transport indispensables like canned food, trucks and aviation fuel to Russia, possibly played a crucial role in preventing its collapse in 1941-42. And the bomber crews massively disrupted Germany’s war potential at the cost of horrid fatality ratios, significantly shortening the war.

Another myth is that it were U.S. forces who led the D-Day invasion:

On 75th anniversary of D-Day, time to debunk Hollywood myth it was largely a US invasion force.
Of 1,213 warships involved, 892 were British/Canadian; only 200 US. Royal Navy in charge of Operation Neptune. Of 4,126 landing craft involved, 805 American, 3,261 British. 1/2
Two-thirds of the 12,000 aircraft involved in D-Day were RAF/RCAF. Two-thirds of the troops landed on the beaches were British/Canadian. Eisenhower was supreme commander but all his most senior officers in charge of land, sea and air were British 2/2

When Germany attacked the Soviet Union in June 1941 the U.S. was ambivalent about what to do. Both countries were seen as enemies. The well know Senator Harry Truman expressed the U.S. position quite succinctly:

Since they were attacked by the Germans in 1941 the Soviets had pressed their allies to open a western front against Germany. In 1943, after the defeat of the Germans in Stalingrad and the failure of their counter attack in the Battle of Kursk, it became obvious that the Soviets would defeat the Nazi forces. At the Tehran conference in November 1943 Stalin pressed Roosevelt and Churchill again to finally open a western front. Knowing that the Soviets would win over Germany they agreed to launch their invasion in May 1944.

The U.S. dominated western Europe ever since and quite successfully indoctrinated it with its false version of history.