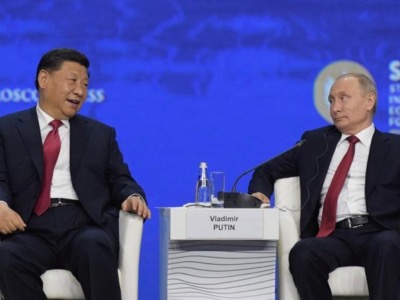 On 5 June, the media projectors zeroed in on President Trump and the European leaders of NATO, who, for the anniversary of D-Day, auto-celebrated in Portsmouth “peace, freedom and democracy in Europe,” vowing to “defend them at any time, wherever they may be threatened”. The reference to Russia is clear.

The major medias have either ignored, or somewhat sarcastically relegated to the second zone, the meeting that took place on the same day in Moscow between the Presidents of Russia and China. Vladimir Putin and Xi Jinping, for their thirtieth meeting in six years, refrained from presenting rhetorical concepts, but noted a series of facts.

The exchanges between the two countries, which last year exceeded 100 billion dollars, are now extended by approximately 30 new Chinese projects for investment in Russia, particularly in the energy sector, for a total of 22 billion dollars.

Russia has become the largest oil exporter to China, and is preparing to do the same for natural gas : the largest Eastern gas pipeline will open in December, followed by another from Siberia, plus two huge sites for the export of liquefied natural gas.

The US plan to isolate Russia by means of sanctions, also applied by the EU, combined with the cessation of Russian energy exports to Europe, will therefore be rendered useless.

Russo-Chinese collaboration will not be limited to the energy sector. Joint projects have been launched in the aero-space and other high technology sectors. The communication routes between the two countries (railway, road, river and maritime) are being heavily developed. Cultural exchanges and tourist flows are also expanding rapidly.

This is wide-scale cooperation, whose strategic vision is indicated by two decisions announced at the end of the meeting :

— the signature of an intergovernmental agreement to extend the use of national currencies, (the rouble and the yan), to commercial exchanges and financial transactions, as an alternative to the still-dominant dollar ;

— the intensification of efforts to integrate the New Silk Road, promoted by China, and the Eurasian Economic Union (EAEU), promoted by Russia, with the “aim of creating a greater Eurasian partnership in the future.”

The fact that this aim is not simply economic is confirmed by the “Joint Declaration on the reinforcing of strategic world stability” signed at the end of the meeting. Russia and China share “identical or very similar positions”, which are de facto contrary to those of USA/NATO, concerning Syria, Iran, Venezuela and North Korea.

They are issuing a warning : the withdrawal by the USA from the INF Treaty (with the goal of deploying intermediate-range nuclear missiles around Russia and China) may accelerate the arms race and increase the possibility of nuclear conflict. They denounce the US refusal to endorse the total ban on nuclear testing.

They also deem “irresponsible” the fact that certain States, although they are signatories of the Non-Proliferation Treaty, practice “joint nuclear missions,” and request the “return to their national territories of all nuclear weapons deployed outside of their frontiers”.

This request directly concerns Italy and other European countries where, in violation of the Non-Proliferation Treaty, the United States have based nuclear weapons which may be used by the host countries under US command : B-61 nuclear bombs which will be replaced from 2020 by the even more dangerous B61-12’s.

The major medias have said nothing about this, but were busy on 5 June describing the splendid costumes worn by First Lady Melania Trump for the D-Day ceremonies