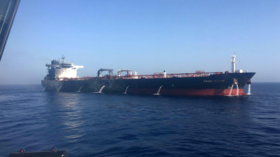 Washington’s claim that Tehran carried out the attack on two oil tankers in the Gulf of Oman is unsurprising, Iran’s FM has said, warning that the US has resorted to “Plan B” to sabotage the Islamic Republic’s diplomatic efforts.

Mohammad Javad Zarif claimed that the US had “jumped to make allegations against Iran [without] a shred of factual or circumstantial evidence,” describing the move as an attempt to demonize Tehran on the world stage and legitimize Washington’s unilateral sanctions against his country.

“I warned of exactly this scenario a few months ago, not because I’m clairvoyant, but because I recognize where the #B_Team is coming from,” Zarif tweeted, using the derogatory term he coined to described the Trump administration.

He warned that Trump’s “B Team” was now moving to “Plan B: Sabotage diplomacy” in an attempt to “cover up its economic terrorism” against Iran.

Iran rescued 44 sailors from two tankers, ‘Front Altair’ and ‘Kokuka Courageous,’ after the vessels came under attack by unknown belligerents on Thursday. One of the ships, the ‘Front Altair,’ was reportedly hit by a torpedo.

US Secretary of State Mike Pompeo was quick to blame Iran for the incident, claiming that Tehran was “lashing out” at Washington’s “successful maximum pressure campaign,” which has consisted of several layers of sanctions.