The New York Times Magazine (6/19/19) presents the push to build hypersonic missiles as driven by fear that “the nation might fall behind Russia and China”—downplaying the US’s systematic dismantling of arms control treaties.

“Fast, effective, precise and unstoppable — these are rare but highly desired characteristics on the modern battlefield.” That’s how the New York Times Magazine (6/19/19) described the hypersonic missiles being pursued by the United States, Russia, China and other countries in a nearly 5,000-word collaborative article that seriously misleads readers on who started and is currently driving the next phase of the global arms race.

The Times article, “Hypersonic Missiles Are Unstoppable. And They’re Starting a New Global Arms Race,” opened with statements by Michael Griffin, the Pentagon’s undersecretary for research and engineering. Characterized as “an unabashed defender of American military and political supremacy” and the “chief evangelist for hypersonics,” Griffin brags about being an “unreconstructed Cold Warrior” and cites the US’s rapid development of the atomic bomb as a precedent for treating hypersonic missiles as the “highest technical priority”: 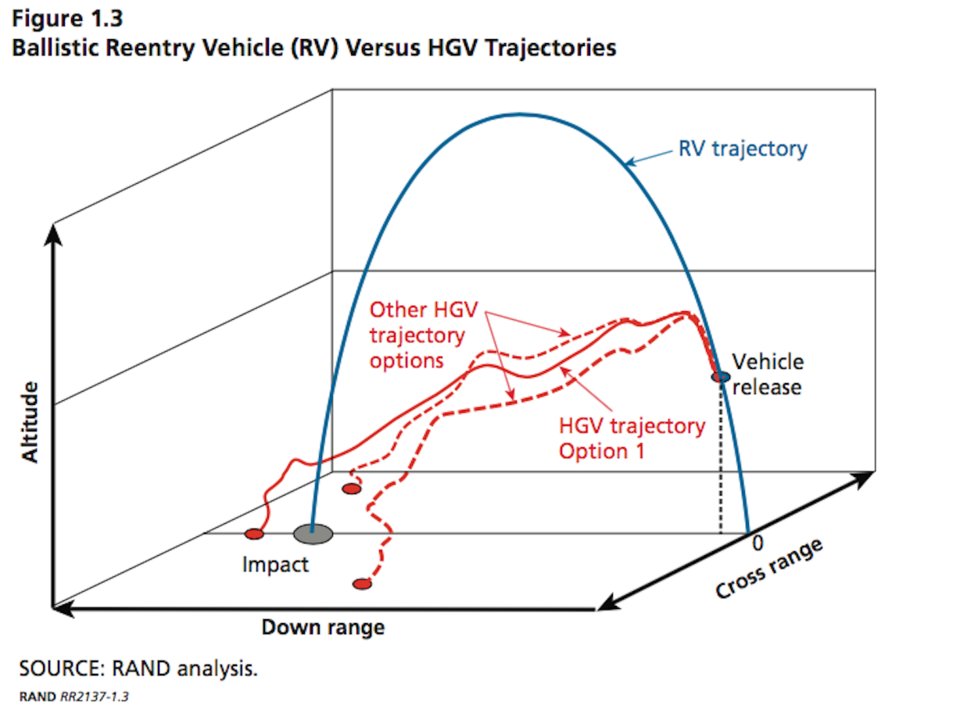 A RAND graphic demonstrates how much more difficult it is to intercept a hypersonic missile (called an HGV here) vs. a traditional ballistic missile (Business Insider, 4/30/18).

Following the usual alarmist formula used to sell military upgrades to the public, the Times then made the predictable pivot to uncritically transmitting false claims about the need to “act quickly” lest the US “fall behind” the Russian and Chinese menaces. The piece advanced several scary scenarios—like China rendering US aircraft carriers “obsolete,” or attacking “military headquarters in Asian ports or near European cities”—and went on to advertise the potential advantages that “revolutionary” weapons having the “unprecedented ability to maneuver and then to strike almost any target in the world within a matter of minutes” could offer US foreign policy and military strategy:

Hypersonic missiles are also ideal for waging a decapitation strike — assassinating a country’s top military or political officials. “Instant leader-killers,” a former Obama administration White House official, who asked not to be named, said in an interview.

Within the next decade, these new weapons could undertake a task long imagined for nuclear arms: a first strike against another nation’s government or arsenals, interrupting key chains of communication and disabling some of its retaliatory forces, all without the radioactive fallout and special condemnation that might accompany the detonation of nuclear warheads.The Times mentioned that the hypersonic missiles the US is developing will “only be equipped with small conventional explosives,” while noting that “nuclear warheads” are being fitted onto Russian hypersonic missiles, without expanding on the significance of this divergence.

Analysts and experts not cited in the article have noted that the conventional narrative of US hypersonics lagging behind Russia and China’s is misleading, because the countries have different goals. Russia and China’s hypersonics program is focused on delivering nuclear warheads, which require much less precision and investment than US hypersonics, focused on the “much more difficult” task of delivering non-nuclear warheads (CNBC, 5/11/18).

Other experts have argued that the conventional narrative is false, because the US is “still the leader” in hypersonic missiles, having researched them for over a decade, and has “done a lot more than Russia and China have,” while noting that Russian and Chinese hypersonic development is aimed at overcoming US missile defense systems near their borders to preserve their nuclear deterrent (Business Insider, 4/30/18). 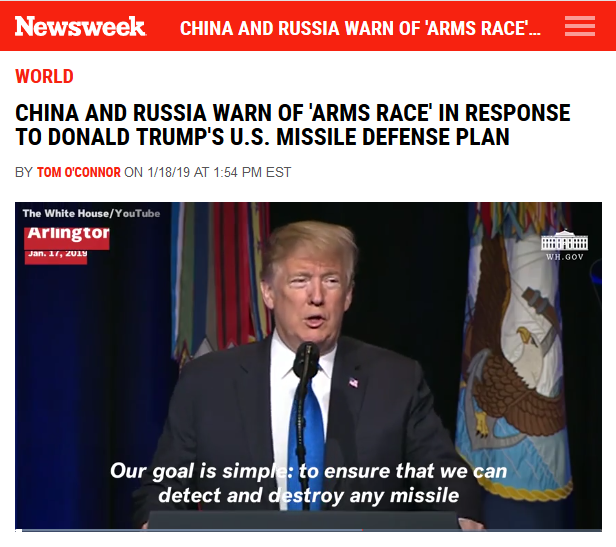 Russia and China have consistently warned that the US’s scrapping of arms treaties will inevitably lead to a dangerous arms race (Newsweek, 1/18/19).

As I’ve written earlier (FAIR.org, 5/17/19), nuclear strategists have long known that “missile defense” systems are actually offensive weapons designed to obtain a first-strike advantage by neutralizing retaliatory strikes. Yet the crucial context of Russia pursuing its hypersonics program as a cheaper and more rational strategy—as opposed to pointlessly competing with the US by creating its own missile-defense systems—and as a response to the US’s unilateral 2001 withdrawal from the 1972 Anti-Ballistic Missile Treaty limiting those systems, is buried near the end of the article, in the 43rd paragraph.

Instead, the Times preferred to ascribe agency and responsibility to mysterious forces and inanimate missiles manipulating the US both in its headline—it’s the missiles that are “starting a new global arms race,” not the government—and in its claim that “the rush” to possess hypersonic missiles has “pushed the United States into an arms race with Russia and China.”

In fact, the Times misleadingly points to “the threat” hypersonics pose to “retaliatory weapons,” which could “upend the grim psychology of Mutual Assured Destruction,” without once noting that destabilizing US ballistic missile defense systems deployed near Russian and Chinese borders are already doing just that, with Russia and China pursuing hypersonic nukes capable of penetrating US missile defenses precisely to  restore the balance of Mutual Assured Destruction.

Nor did the Times quote statements from Russian and Chinese officials warning that US missile defense expansion will “inevitably lead” to an “arms race in space” with “the most negative consequences” for “international security and stability,” and their desire to avoid an arms race because the US already has a military budget much larger than Russia’s and China’s combined. This is consistent with FAIR’s findings (Extra!, 5/01) of corporate media ignoring the US’s long-term goal of weaponizing and dominating outer space under the pretense of expanding missile defense systems. 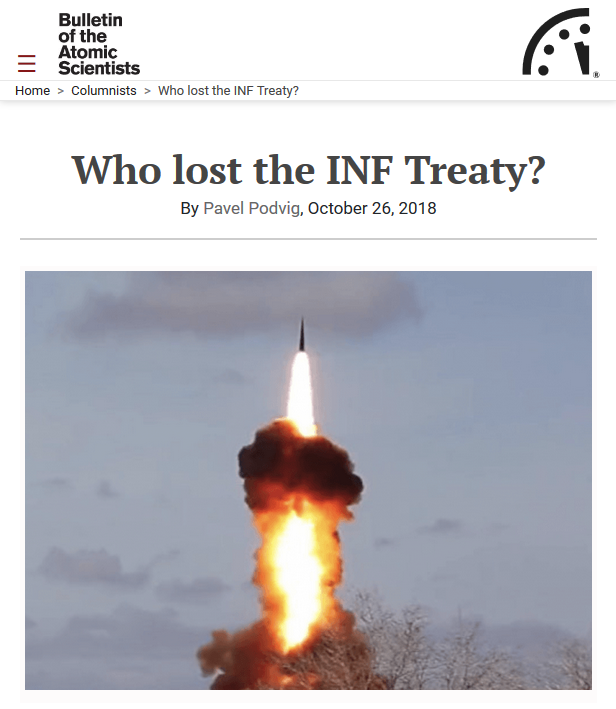 The Bulletin of the Atomic Scientists(10/26/18) argues that “the decision to scrap the INF Treaty endangers the entire architecture of nuclear arms control agreements.”

However, the most glaring omission in the Times’ coverage of the arms race—in keeping with its cover for US missile defense expansion—was its failure to ever mention the US plans to unilaterally scuttle the crucial 1987 Intermediate-Range Nuclear Forces (INF) Treaty banning US and Russian medium-range missile arsenals, despite Russian attempts to save it (Al-Jazeera, 1/17/19).

That Russia is developing mid-range hypersonic nuclear weapons in response to US suspension of the INF treaty would be an important thing to mention. Also worth mentioning: that US drones and the Aegis Ashore missile defense system are in clear violation of Article II in the INF Treaty, while US allegations of Russian violations have never been demonstrated (Common Dreams, 2/1/19).

Physicist Theodore Postol published an exhaustive report (Bulletin of the Atomic Scientists, 2/14/19) refuting false media coverage and official US claims, echoed by credulous media coverage, that its Romanian and Polish Aegis Ashore sites aren’t in violation of the INF Treaty because they lack offensive capabilities, and are merely deployed to counter long-range missiles from Iran. Postol pointed out that the US Aegis systems in Eastern Europe lack the ability to detect long-range missiles, but are capable of launching cruise missiles that could make near-zero warning nuclear strikes on Russia.

While US allegations of Russia’s 9M729 missile being a “blatant violation” of the INF Treaty could be true, the Bulletin of the Atomic Scientists (10/26/18) has noted that the “blatant violation” narrative has been uncritically accepted across the media, despite being almost impossible to verify, because the US hasn’t publicly released any evidence for its claims. The Congressional Research Service’s report on the matter repeatedly mentions that the US hasn’t publicly provided “any details” and has failed to “cite the evidence” used to make this determination.

The New York Times laments that “stopping an arms race is much harder than igniting one,” while falsely referring to how all the military superpowers have decided to go “all in.” More to the point, it’s very hard to stop an arms race when major newspapers obscure who or what is driving it, perpetuating the false narrative that the US only responds to threats, and never instigates them.

You can send a message to the New York Times Magazine at magazine@nytimes.com(Twitter:@NYTMag). Please remember that respectful communication is the most effective.