Hours after Puerto Rican Governor Ricardo Rosselló’s early Thursday morning announcement that he will resign on August 2nd, thousands demonstrated in downtown San Juan demanding the resignation of his successor, Justice Minister Wanda Vázquez Garced. Both Rosselló and Vázquez are members of the New Progressive Party (PNP) and the Democratic Party.

#WandaRenuncia quickly became one of the most popular Twitter hashtags while homemade signs Thursday featured the slogans, “this has not finished” and “we are cleaning the whole house.” Protesters made clear their anger is directed not only against the Rosselló administration, but against the ruthless austerity regime imposed on the island by its Wall Street creditors. 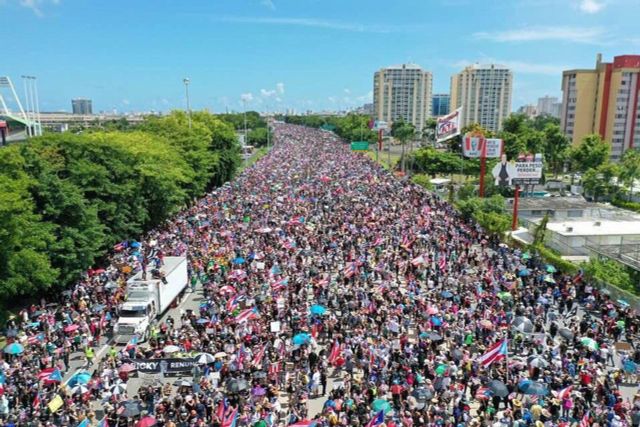 Hundreds of thousands march to demand the resignation of Rosselló

Rosselló’s resignation marks the first time in US history that mass demonstrations have forced the resignation of a sitting governor. Further demonstrations are planned each day through Monday. In recent days, protests have taken place in Los Angeles, New York, Chicago, Boston, Miami, Orlando as well as in the Spanish cities of Barcelona and Madrid.

The American ruling class is gripped by the fear that protests will continue on the island and inspire strikes and protests on the mainland. In an article titled “Puerto Rico is in chaos, and some worry continued instability is a major threat,” the Washington Post quoted Edgar Roman, president of the Puerto Rican Bar Association, who said, “The survival of the political system as we know it is at risk.”

Finance capital is responding to the demonstrations with ruthless denunciations of the working class and calls for dictatorial forms of rule. The ruling class is attempting to take advantage of the collapse of Rosselló’s administration to transfer dictatorial powers to the Financial Oversight and Management Board.

In an editorial board statement yesterday titled “Puerto Rico’s Political Meltdown,” the Wall Street Journal called for the oversight board to crush social opposition to austerity aimed at paying back creditors on Wall Street. The editorial seethes with anger over the Puerto Rican government’s failure to “impose discipline” and “clean up San Juan hell.”

“Puerto Rico’s main problem,” the editorial declared, “is democratic socialism, and Mr. Rosselló is typical of a political class that buys votes with handouts. For decades high taxes and inflexible labor laws have depressed investment and incentives to work. Private workers are guaranteed $600 Christmas bonuses, 15 days of vacation and ironclad job protections. A household can get 50% more in government benefits than the take-home monthly minimum wage.”

Such statements pose an urgent threat not only to Puerto Rican workers, but to the working class in the US and around the world.

The American ruling class abandoned the Puerto Rican working class when the 2017 hurricanes hit, leaving up to 5,000 dead. Two years later, nothing has been done, thousands of people are sleeping under tarps to protect themselves from the rain and half the population lives in poverty. The banks and corporations respond to social protest over inequality by demanding the speed-up of the destruction of all social services and the imposition of imperial “discipline.”

This is the bipartisan consensus in Washington. Last week, the Washington Post—associated with the Democratic Party and owned by Amazon CEO Jeff Bezos—published an editorial board statement complaining that the oversight board’s “effectiveness has been hampered” and that “Congress should take steps to strengthen the board.”

The angry tone of the Wall Street Journal editorial is partly explained by the fact that the oversight board was on the verge of submitting a plan to slash social spending further when the demonstrations broke out two weeks ago.

Wall Street demanded massive cuts to public pensions, but, the New York Times explained, “when the island’s active teachers recently voted on the deal, a majority rejected it—against the advice of their union,” the American Federation of Teachers (AFT).

After the AFT failed to ram through the cuts, Congressional Republicans voted to give the oversight board the power to scrutinize Medicaid payments to the territory and are planning to introduce legislation giving the board day-to-day control over governing the island, a move Democrats will facilitate.

According to El Nuevo Día, Democratic Congressman Raul Grijalva told the paper he “could not guarantee the support of the Democratic caucus” for opposing Republican–led plans.

The Times complained yesterday about the “limits on [the oversight board’s] legal powers,” noting that “it has little ability to push for specific regulatory changes or labor-law amendments that might foster economic growth.”

The ruling class’s drive to extract profit from the impoverished residents of Puerto Rico leads toward dictatorial forms of rule. In a 2016 Yale Law Journal article, New York University professor Clayon Gillette and oversight board member David Skeel called for the abolition of the government and direct rule by Wall Street:

“Deep financial distress is emblematic of the failure of a city’s democratic processes,” the authors wrote, referencing the 2013 bankruptcy of Detroit, during which an emergency manager imposed by the Obama administration abrogated the decision-making powers of the elected city council and forced through massive cuts to social programs and pensions.

The law review article continued, “Displacement of those processes in an effort to restore the financial stability that a well-functioning democracy would pursue, arguably is far less problematic than it might be with a city that is already providing the local public goods that localities are created to deliver.”

As with dictators who step down in the face of mass upheavals only to hand power to a trusted insider, the appointment of Wanda Vázquez is unlikely to slow the protests. The cheers of protesters turned to loud boos Wednesday night when the crowd who gathered outside the governor’s residence learned that Vázquez was his replacement.

It does not testify to the strength of her incoming administration that Vázquez’s first official act yesterday was to publish a statement “categorically reject[ing]” widely-published reports that she herself was involved in criminal activity while serving as a chief prosecutor on the island.

“Vázquez is compromised,” prominent Puerto Rican attorney Mayra Lopez Mulero told the Washington Post. “The public would perceive her as an illegitimate leader because of her office’s slow response to the chat scandal.”

“This is a triumph for the people of Puerto Rico,” she said, adding that protesters “successfully changed their leadership and demanded accountability.”

The implication of this tweet is that the protests have already “triumphed” and that no further demonstrations are necessary. This is a political lie.

While Rosselló’s downfall is a powerful expression of the immense social strength of the working class, his replacement with another reactionary Democrat will not resolve any of the deep social grievances that have brought hundreds of thousands of workers and students into the streets.

Addressing the roots of the social devastation of Puerto Rico requires the building of an independent revolutionary movement of the working class and its unification with workers on the mainland in a common struggle against American imperialism and the capitalist system as a whole.