Johnson heads the most right-wing government in British history, dedicated to a “no deal” exit from the European Union that will have a devastating impact on jobs, wages and working conditions. An old Etonian who cannot conceal his contempt for the “lower orders,” he is despised by millions of British workers. Yet he has now assumed the highest office in Britain and is reported to be contemplating a snap general election to secure, with some chance of success, a mandate for leaving the European Union on October 31 and then implementing his agenda of tax cuts for big business and the rich. 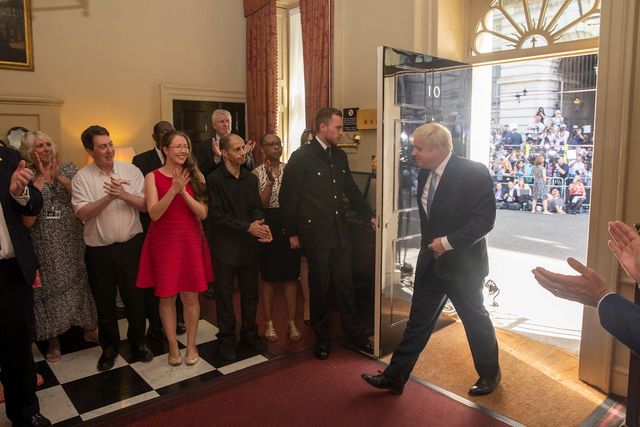 Political responsibility for the ascendancy of Johnson and his cabinet of Thatcherite ideologues must be placed at the door of Jeremy Corbyn. It is he who has acted as political midwife to a Johnson government, thanks to his suppressing all attempts by workers to wage a struggle against big business and its political defenders.

Corbyn’s four years as leader of the Labour Party are a strategic experience for the British and international working class in the role of the supposed “left” in preventing any political challenge to the Labour and trade union bureaucracy which acts to police the class struggle on behalf of the ruling class.

He was elected leader of the party in September 2015 by a landslide of 59.5 percent of first preference votes in a political backlash against his three Blairite opponents and their declared policy of “austerity-lite” and imperialist militarism. When the Blairites moved to depose him with a June 2016 no-confidence vote by 172 MPs, this backfired. Corbyn won 61.8 percent of the vote, 62,000 more than in 2015. Hundreds of thousands of workers and youth joined so that by 2017 Labour had over half a million members and was Europe’s largest party.

In 2017, Prime Minister Theresa May called a snap general election, calculating that she would be able to rally support by promising to secure a favourable Brexit deal with the EU. Instead Labour’s vote shot up to 40 percent—a ten percent swing and the biggest since Clement Atlee in 1947. The Tories were reduced to a minority government reliant on the backing of 10 Democratic Unionist MPs.

There could be no more favourable situation for any leader of the Labour Party to wage a struggle against the Blairite right and then take the fight to the Tories. Corbyn sat atop a left-wing wave of anti-austerity and antimilitarist sentiment that could have propelled him into office. But Corbyn’s central goal was to thwart all attempts to expel the Blairites, as he adopted their programme piecemeal—allowing a free-vote on war in Syria, accepting NATO membership and the Trident nuclear missile system and insisting that Labour-run local authorities loyally impose Tory-dictated cuts.

At the height of his popularity, Corbyn moved to finally close down all opposition to the Blairites. In 2018, he united with the trade union bureaucracy to oppose demands for the mandatory reselection of Blairite MPs while Shadow Chancellor John McDonnell mounted a “tea and biscuits” offensive to win support from the City of London.

At the height of the Tory crisis over Brexit in April this year, with May teetering on the edge, Corbyn worked to block any struggle to mobilize the working class to bring down the May government and instead entered into talks with her. It was left to the hard-line Brexit faction of her own party to at deliver the coup de grace to May, ending in Johnson becoming the second unelected Tory prime minister since 2016.

Johnson heads a government that is still deeply divided over Brexit with a majority of just three. But Corbyn has handed the political initiative in his own party to the Blairites, who are busy witch-hunting left-leaning Labour members based on bogus claims of anti-Semitism and actively plotting Corbyn’s removal. Labour MPs have “privately told” Rupert Murdoch’s The Sun “that Mr Johnson’s move to No10 will almost certainly ‘speed up’ coup attempts to change Labour’s leader. One said: ‘Having Boris there will be good for us as it will speed up what has to happen.’”

The Blairites are insisting that Labour must commit itself to remaining in the EU. Their perspective is a government of national unity with the Liberal Democrats, the Scottish National Party and Plaid Cymru, the Party of Wales. This could allow the Tories to secure victory in a snap Autumn election in alliance with the Brexit Party of Nigel Farage by whipping up a nationalist campaign centred on hostility to the betrayal by the “Westminster elite” of the 2016 referendum vote.

Though most Labour supporters voted Remain, between 26 and 34 percent voted Leave, mostly in its northern working-class heartlands that will be targeted by the Brexit Party. The combination of the confusion and disorientation generated by Corbyn was indicated in the May 26 European elections that saw Labour’s vote slashed to 15 percent as it haemorrhaged support in Remain constituencies to the Liberal Democrats and to Farage’s xenophobic party in Brexit supporting areas.

Johnson could even possibly avoid calling elections altogether, if Caroline Flint’s claim that over 40 other Brexit-supporting Labour MPs would support his government in a parliamentary leave vote. What is excluded under Corbyn’s leadership is the working class intervening in its own interests in the greatest crisis of rule faced by British imperialism since the Second World War.

There is nothing unique in Corbyn’s role. He follows in the political footsteps of Syriza in Greece, which came to power in January 2015 pledged to fight EU-backed austerity only to impose deeper cuts than its right-wing New Democracy predecessors. Everywhere the official “left”, whether Corbyn in the UK or Bernie Sanders in the US, works to suppress the class struggle and hand political victory to the right—so that Britain now has its political equivalent to Donald Trump sitting in 10 Downing Street.

Everything depends upon the working class drawing the necessary political conclusions from the four years of Corbyn’s leadership.

Labour is a party of imperialist rule and cannot be transformed by rank-and-file pressure into an instrument for opposing austerity, militarism and war. “Lefts” such as Corbyn are loyal defenders of the capitalist class. They would rather organise the expulsion of their own supporters than risk mobilising a movement of the working class that might get out of their control.

Neither the pallid reformist nostrum championed by Corbyn, nor support for either Brexit or remaining in the EU can answer the desperate social crisis facing the working class. The conflict in ruling circles over Brexit is over whether to ally with the US or Germany and France in an escalating trade war that threatens to plunge the entire world into military conflict. The price will be paid in stepped-up austerity in the name of global competitiveness and the growth of the far-right.

Only a unified movement of the British, European and international working class for socialism offers a way forward. After decades in which the class struggle has been suppressed, the world is witnessing the initial expression of a political rebellion against the discredited social democratic parties and trade unions in a wave of strikes in one country after another. The exposure of Corbyn’s claim to represent a left alternative opens the way for workers in Britain to take their place in this emerging movement under the leadership of the Socialist Equality Party.