It’s a stale old secret. But it is also one of the most formidable denials of the Atlantic Alliance: nuclear bombs are stored in violation of international law in Italy, Germany, Belgium, the Netherlands and Turkey. By mistake, a member of the NATO Parliamentary Assembly wrote it in a report immediately withdrawn. 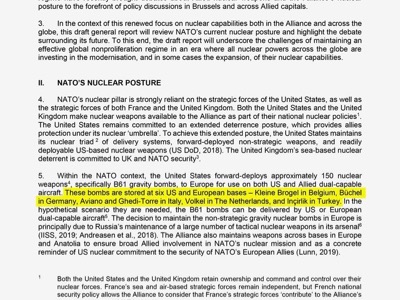 That the United States keeps nuclear bombs in five NATO countries – Italy, Germany, Belgium, the Netherlands and Turkey – has long been proven (especially by the Federation of American Scientists – FAS) [1]. But NATO never officially admitted it. However something has just gone off the rails.

In the document titled “A new era for nuclear deterrence? Modernization, Arms Control and Alien Nuclear Forces”, by Canadian Senator Joseph Day on behalf of the Defense and Security Committee of the NATO Parliamentary Assembly, the’ secret ’has been revealed. Through the “cut and paste” function, the Senator inadvertently reported in his document the following paragraph (number 5), taken from a confidential NATO report:

“In the NATO context, the United States has deployed in advanced positions in Europe about 150 nuclear weapons, specifically B61 gravity bombs. These bombs are stored in six US and European bases – Kleine Brogel in Belgium, Buchel in Germany, Aviano and Ghedi Torre in Italy, Voikel in the Netherlands and Incirlik in Turkey. In the hypothetical scenario where they would be necessary, B61 bombs can be transported by US or European dual capacity aircraft”(photo).

Accusing Russia of keeping many tactical nuclear weapons in its own arsenal, the document states that the US nuclear weapons deployed in advanced positions in Europe and Anatolia (ie near Russian territory) serve “To ensure the full involvement of the Allies in NATO’s nuclear mission and the concrete confirmation of the US nuclear commitment to the security of the European allies of the Alliance”.

As soon as Senator Joseph Day’s document was published online, NATO intervened by deleting it and then republishing it as an amended version. Too late though. Some sites (above all the Belgian De Morgen) had already recorded it in its complete original version [2]. At this point the reckless writer ran for cover, writing in the Washington Post that it was merely a draft for the drafting of a report to the NATO Parliamentary Assembly to be published in November [3]. But he could not deny what had been written in the paragraph where he quotes the confidential report of the Organization.

This confirms what we have documented for years [4]: in Aviano (Province of Pordenone) USA F-16C / D fighters are ready for nuclear attack with 50 B61 bombs (number estimated by the Federation of American Scientists); in Ghedi Torre (Province of Brescia) the Italian PA-200 Tornado are ready for the US-led nuclear attack with 20 B61 bombs. From 2020 the B61 will be replaced by the B61-12, designed especially for new F-35 fighters.

All this in violation of the Non-Proliferation Treaty, ratified by both the US and Italy. Meanwhile the Parliament is tearing on the TAV but not on the Bomb, that it tacitly unanimously approves.