The Washington Post notices Russia’s offer to sell its air defense systems to Saudi Arabia. It does not like that:

The attack on Saudi Arabian oil facilities last weekend were a disaster for both Riyadh and Washington, with weapons allegedly made in Iran circumventing expensive U.S. missile defense systems.

But in Moscow, news of the attack was greeted as yet another chance to mock the United States and its allies — all while extolling the virtues of Russia’s own missile defense technology.

“We still remember the fantastic U.S. missiles that failed to hit a target more than a year ago, while now the brilliant U.S. air defense systems could not repel an attack,” Russian Foreign Ministry spokeswoman Maria Zakharova told a briefing on Friday. “These are all links in a chain.”

The Yemeni attack on Saudi oil installations caused serious damage (more photos). In Abqaiq at least five of nine stabilization columns were destroyed. These are needed to make crude oil transportable. The three phase separators that separate the fluids into gas, oil and water were likewise eliminated. Most of the gas storage tanks at Abqaiq were penetrated. 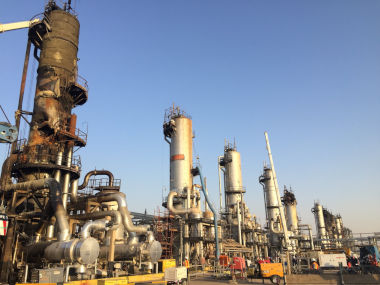 Some 5,000 additional workers are now racing to repair the damage. It will still take weeks if not months to get everything up and running again.

Saudi Arabia had to delay oil deliveries to Asian customers. Some will receive heavy oil grades instead of the light sweet crude they ordered. Deliveries to Bahrain were halted completely. Deliveries to Saudi refineries were cut. Saudi Arabia bought additional gasoline and kerosene from the international markets as its own refineries received less crude oil than needed. Saudi citizens report of a lack of gasoline and a video show long queues in front of a local gas station.

The air defenses surrounding Abqaiq proved to be ineffective. That may have been because they were shut off. But it is doubtful that the systems, even if it had been on alert, would have made any difference.

The U.S. made Patriot system in question was built as an air defense system against fighter jets. It was later upgraded to give it some capability against ballistic missiles. But even its latest iteration is not capable of defeating smaller drones or low flying cruise missiles.

While the Washington Post writer recognizes that the Patriot system can cover only one third of the horizon and fails to detect smaller low flying objects he still asserts that it is better than the systems Russia makes:

While Russia’s S-400 system may have impressive specifications on paper, many analysts are cautious in their assessment of it. It has not been fully tested in real life, whereas the

missiles during both the Gulf War and the U.S.-led invasion of Iraq.

The “successfully intercepted” link goes to the a site named missiledefenseadvocacy.org which is obviously a lobby organization to promote U.S. air defense systems. Its description of the Patriot includes these two claims:

During Operation Iraqi Freedom, U.S. Patriot batteries intercepted a total of nine enemy tactical ballistic missiles. One notable intercept occurred on March 23, 2003 when Iraqi forces launched an Ababil-100 tactical ballistic missile (TBM) at coalition forces in Kuwait. The TBM was destroyed by a Patriot system protecting over 4,000 Soldiers and the Aviation Brigade of the 101st Airborne Division.

There is serious doubt that those numbers are true. Besides that the number of hits does not say anything about the system unless one also knows the number of missiles it failed to engage. After the first Gulf war Congress investigated the issue and concluded:

The Patriot missile system was not the spectacular success in the Persian Gulf War that the American public was led to believe. There is little evidence to prove that the Patriot hit more than a few Scud missiles launched by Iraq during the Gulf War, and there are some doubts about even these engagements.

During the first Gulf war the Patriot system had a systemic software problem that made them incapable of hitting the targets:

On February 25, 1991, during the Gulf War, an American Patriot Missile battery in Dharan, Saudi Arabia, failed to track and intercept an incoming Iraqi Scud missile. The Scud struck an American Army barracks, killing 28 soldiers and injuring around 100 other people. A report of the General Accounting office, GAO/IMTEC-92-26, entitled Patriot Missile Defense: Software Problem Led to System Failure at Dhahran, Saudi Arabia reported on the cause of the failure. It turns out that the cause was an inaccurate calculation of the time since boot due to computer arithmetic errors. Specifically, the time in tenths of second as measured by the system’s internal clock was multiplied by 1/10 to produce the time in seconds. This calculation was performed using a 24 bit fixed point register. In particular, the value 1/10, which has a non-terminating binary expansion, was chopped at 24 bits after the radix point. The small chopping error, when multiplied by the large number giving the time in tenths of a second, led to a significant error.

Twelve years later, during the war on Iraq, the Patriots also failed:

The 32nd Army Air and Missile Defense Command, which is charged with protecting U.S. ground forces from air and missile attacks, recently released its account of “Operation Iraqi Freedom.” As part of that history, the command reports that the Patriot missile defense system, which is designed to destroy short- and medium-range ballistic missiles, scored a perfect nine for nine in intercepting Iraqi missiles. Colonel Charles Anderson, chief of staff of the command, wrote, “The critics concerns over Patriot lethality should be forever silenced.”

Yet Iraq fired at least 23 ballistic and cruise missiles, according to the report, during the three-week span it took U.S. forces to fight their way to Baghdad and topple Saddam Hussein’s regime.

Nine out of more than twenty three is better than zero but not a great record. But the Patriots also achieved two hits on fighter planes. Unfortunately those were the wrong ones:

A US Navy fighter has been shot down over Iraq by a Patriot missile in the second friendly-fire incident involving the weapon.

The F-18 Hornet from the carrier Kitty Hawk went missing on Wednesday night during a bombing mission. The incident follows the shooting down of an RAF Tornado GR4 by a Patriot as it returned to base in Kuwait, with the loss of its two-man crew.

In 2017 the Saudis fired Patriot missiles against Yemeni ballistic missiles that were launched at Riyadh. All of them failed to hit their targets:

[M]y colleagues at the Middlebury Institute of International Studies and I closely examined two different missile attacks on Saudi Arabia from November and December 2017.

In both cases, we found that it is very unlikely the missiles were shot down, despite officials’ statements to the contrary.

The Patriot system does not work. It is one of those typical U.S. big ticket items that enrich the owners of the defense industry but are of little combat value.

The U.S. is now sending more soldiers to Saudi Arabia with more Patriot systems and additional Terminal High Attitude Aera Defense, or THAAD, systems. Neither of these can protect against drones or cruise missiles like those that were used in the attack on Abqaiq. The whole operation is useless security theater.

The Russian base in Syria was attacked several times by swarms of drones. All were taken down by either electronic countermeasures or by short range air defense systems. The long range S-400 have not engaged because there was no situation yet where they were needed.

No western country can provide such a modern layered system. If the Saudis really want to defend their country they will have to buy the Russian stuff. But the U.S. is unlikely to allow that.

That makes it more likely that the Saudis will accept the ceasefire the Yemeni Houthi just offered to them (machine translation):

In a speech marking the fifth anniversary of the September 21 revolution, President of the Supreme Political Council Mehdi Mashat launched a peace initiative in which he called on all parties from all sides of the war to seriously engage in serious and genuine negotiations leading to a comprehensive national reconciliation that does not exclude anyone from injecting blood. In the interest of the remaining bonds of brotherhood and to overcome the higher national interests.

He announced the cessation of the targeting of Saudi territory by flying planes, ballistic missiles, wings and all forms of targeting.

“We are waiting for the same or better greetings in a similar announcement to stop all forms of targeting and aerial bombardment of our Yemeni territory and reserve the right to respond if this initiative is not met,” he said.

We will have to wait to see how the Saudi clown prince reacts to that offer. If he rejects it the Houthi will surely remind him that his oil exporting desert country is a target rich environment.

One thought on “U.S. Ships More Air Defense Systems That Do Not Work To Saudi Arabia”