END_OF_DOCUMENT_TOKEN_TO_BE_REPLACED

The Mideast has its own variety of crazy humor. The Saudis have been blasting and bombing wretched Yemen, one of this world’s poorest nations, since 2015.

These US-supported attacks and a naval blockade of Yemen imposed by Saudi Arabia and its sidekick ally, the United Arab Emirates, have caused mass starvation. No one knows how many Yemenis have died or are currently starving. Estimates run from 250,000 to one million.

END_OF_DOCUMENT_TOKEN_TO_BE_REPLACED

The Washington Post notices Russia’s offer to sell its air defense systems to Saudi Arabia. It does not like that:
END_OF_DOCUMENT_TOKEN_TO_BE_REPLACED

END_OF_DOCUMENT_TOKEN_TO_BE_REPLACED

The crisis about the Yemeni drone and cruise missile attack on two Saudi oil installations is for now over.

The Saudis and the U.S. accuse Iran of being behind the “act of war” as Secretary of State Pompeo called it. The Saudis bomb Yemen with U.S. made bombs since 2015. One wonders how Pompeo is calling that.

END_OF_DOCUMENT_TOKEN_TO_BE_REPLACED

A Yemeni Shiite man holds his weapon and a flag with an Arabic inscription reading ‘Disgrace is far from us,’ as he takes part in a religious procession held by Houthi rebels to mark the first day of Ashura. Photo: Hani Al-Ansi/dpa

We are the Houthis and we’re coming to town. With the spectacular attack on Abqaiq, Yemen’s Houthis have overturned the geopolitical chessboard in Southwest Asia – going as far as introducing a whole new dimension: the distinct possibility of investing in a push to drive the House of Saud out of power.

Blowback is a bitch. Houthis – Zaidi Shiites from northern Yemen – and Wahhabis have been at each other’s throats for ages. This book is absolutely essential to understand the mind-boggling complexity of Houthi tribes; as a bonus, it places the turmoil in southern Arabian lands way beyond a mere Iran-Saudi proxy war.

END_OF_DOCUMENT_TOKEN_TO_BE_REPLACED Huge blazes were reported at two oil facilities in Saudi Arabia owned by Aramco. While Saudi authorities refused to assign blame, media outlets like the BBC immediately began insinuating either Yemen’s Houthis or Iran were responsible.

END_OF_DOCUMENT_TOKEN_TO_BE_REPLACED

What was “possible” yesterday is now a low-cost proven capability, and the consequences are far from predictable.

Predictably, the mainstream media is serving up heaping portions of reassurances that the drone attacks on Saudi oil facilities are no big deal and full production will resume shortly. The obvious goal is to placate global markets fearful of an energy disruption that could tip a precarious global economy into recession.

END_OF_DOCUMENT_TOKEN_TO_BE_REPLACED 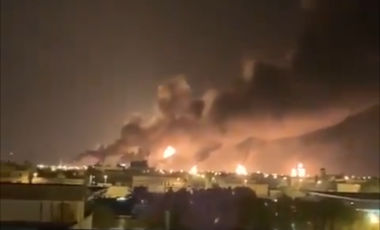